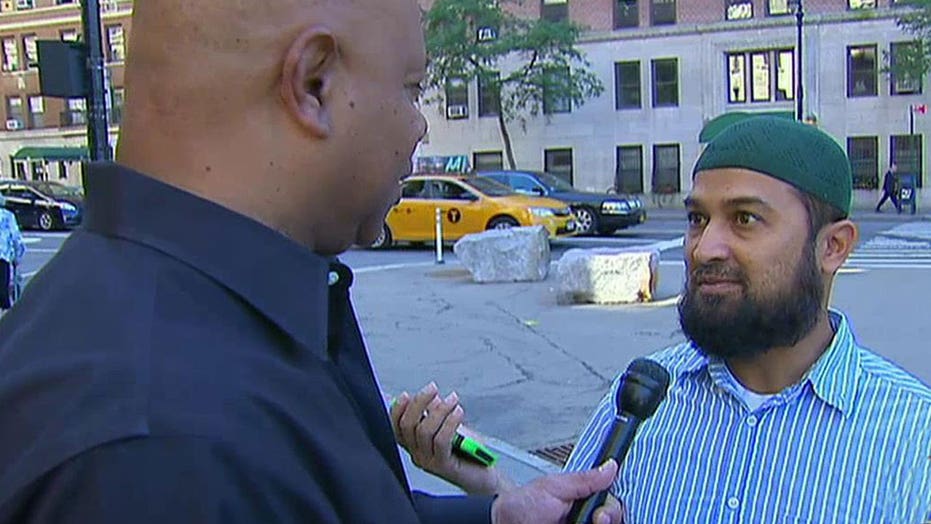 American Muslims speak out on 'Hannity'

Twenty-seven years ago, Iran’s Ayatollah Khomeini called for the death of a British author, giving new fame to Salman Rushdie and infamy to the term “fatwa.”

Rushdie, whose “The Satanic Verses” had been deemed offensive to Muslims, remains threatened by the Islamic decree, but six American women who lack the resources of a best-selling author also have been marked for death by Muslim leaders. Some have been driven from their homes and jobs and even forced to live the rest of their lives in hiding, with little hope that the fatwa will be lifted.

“It is not safe, of course, not even in the West, for anyone who has a fatwa of death issued against them,” Nonie Darwish told FoxNews.com.

“I just look over my shoulder in the parking lot.”

Darwish, an Egyptian-born U.S. citizen who was born Muslim and later converted to Christianity, spoke out against radical Islam following the 9/11 attacks. She has since been the subject of multiple fatwas issued by various Islamic clerics. Like others who bear a price on their heads, Darwish stays below the radar, and constantly looks over her shoulder.

“There are constant attempts to silence us by many Islamic organizations,” she said. “We are the No. 1 target of jihadists and ISIS sympathizers who are now in all 50 states.”

Ayaa Hirsi Ali has lived under a fatwa for years for speaking out against abuses of women in Muslim society. (Reuters)

Darwish is cut off from her family in Egypt, which disapproved of her decision to speak out. She has published several books, including “The Devil We Don’t Know: The Dark Side of Revolutions in the Middle East,” and is the founder and president of “Arabs for Israel.”

Molly Norris was a respected newspaper cartoonist in 2010, when Comedy Central censored a “South Park” episode that featured the prophet of Islam, Muhammad, amid outrage from extremists. Norris fought back with free speech, but it cost her her career.

Norris drew a cartoon of the religious figure, whom Islamist scholars believe must never be portrayed, on various items such as a teacup, a thimble and a domino. Her work was never formally published, but images went viral on the Internet and helped promote “Everybody Draw Muhammad Day.”

Suddenly, Norris was deluged with death threats. Influential U.S.-born Muslim cleric Anwar Al-Awlaki issued a fatwa calling for her death a year before he was killed by a U.S drone strike in Yemen.

Raza admits looking over her shoulder, but tries not to live in fear. (HonorDiaries.com)

Former FBI counter-terrorism agent David Gomez, who handled Norris’ case from the Seattle field office at the time, told FoxNews.com that the bureau advised Norris of the “very legitimate” threats against her. The bureau stopped short of telling Gomez to go underground, but advised her to take certain precautions, including changing her appearance.

Norris opted to disappear, leaving her job and home and cutting off communication with friends and neighbors.

A source told FoxNews.com that Norris is alive and living a new, quiet life in an undisclosed location and that the decision to completely disappear was spurred by fear for the lives of her loved ones. However, many argue she was hardly given a choice.

Nonie Darwish was marked for death after converting to Christianity and speaking out against violence within Islam.

“People are shocked to realize a journalist inside the U.S. could be forced into hiding by radical Islam,” said author Larry Kelley, founder of the Free Molly Norris Foundation. “This issue is a really big one as far as our freedoms are concerned.

Kelley’s foundation has raised an undisclosed sum and hopes to give it to Norris to help her get by, but hasn’t been able to get in touch with her.

And the fatwa against Norris has not faded. She was again spotlighted three years ago in Al Qaeda’s “Inspire” magazine on its “Wanted: Dead or Alive for Crimes Against Islam” list alongside the likes of Rushdie and French cartoonist Stephane Charbonnier, known for his irreverent drawings of Muhammad.

The fatwa against Charbonnier ended Jan. 7, 2015, when two Muslim fanatics stormed the offices of his employer, the satirical magazine Charlie Hebdo, and killed him and 11 others.  If Norris had thought about resurfacing, the attack surely gave her new pause.

“I do hope she is okay,” said Mark Baumgarten, the current editor of Seattle Weekly, one of a number of publications Norris contributed to before going into hiding. “But I have no way of knowing.”

Fatwas are not empty threats, according to experts. Many subjects in addition to Charbonnier have been killed by fanatics who believe they win eternal favor by making good on the threats. Egyptian academic  Forag Foda, who wrote in defense of secularism and Western values, was assassinated in 1992 after a fatwa from Sheikh Gad al-Haq Ali Gad al-Haq, who at the time was the Grand Imam of al-Azhar, Egypt’s highest authority in Sunni Islamic thought and Islamic jurisprudence.

After the order went out against Rushdie, the British-Indian author hired armed guards, traveled under a phony name, wore disguises and rarely saw his own son. Stores that sold his books were burned and the Japanese translator of “The Satanic Verses” was murdered.

Ayatollah Ruhollah Khomeini died in 1989, but his fatwa against Rushdie did not. (Reuters)

Just last month, 40 state-run Iranian media outlets added a reported $600,000 to the near $4 million bounty for Rushdie’s head and renewed calls for his death.

“Depending on the issue, a fatwa could be permanent or temporary. In the case of established principles like respecting prophet, it is permanent,” Daniel Akbari, an Islamic scholar and Shariah-certified lawyer for the Supreme Court of Iran, now an adjunct professor of law at St. Mary’s University in Texas, told FoxNews.com. “Going underground and living secretly is the first step the targets of fatwa take to avoid the life-threatening danger that could even threaten the life of their families. They have to limit the number of people they used to socialize with and in many cases leave their jobs.”

Fatwas were traditionally issued by muftis, who are very high-ranking imams. But in recent times, less respected scholars and figures with less credibility and followers have begun issuing fatwas.

Pamela Geller, co-founder of the controversial anti-Muslim extremist American Freedom Defense Initiative, is believed to have been the target of two men who tried to storm a “Draw Muhammad” cartoon competition in Garland, Texas, last year. She had already been threatened with death from various Islamist groups, including ISIS.

Geller has defiantly lived under Islamist death threats since at least 2006, when her blog, Atlas Shrugs, reprinted cartoon images of Muhammad originally published by the Danish newspaper Jyllands-Posten. Geller organized a "Draw the Prophet" cartoon contest held May 3, 2015, at the same site in Texas where a Muslim group had months earlier held a "Stand With the Prophet" event.

Two Muslim extremists were killed in a shootout with a Garland Independent School District police officer outside the event.

Geller is believed to have been the target of an attack last year in Garland, Texas.

“I was their prime target,” Gellar told FoxNews.com. “Muslims have called for my death and published on Twitter what they think is my home address. Shortly after the Garland event, ISIS issued a formal fatwa calling for my death.”

A month later, a 26-year-old Muslim man, Usaamah Rahim, was killed by Boston police after charging at them with a military knife. After his death, police revealed that Rahim was an ISIS follower who had planned to behead Geller in retaliation for her Muhammad art exhibit.

Gellar’s strong stance against radical Islam has angered more than just Muslims. She was denied entry into the UK in 2013 as “not conducive to the public good” and has been branded a bigot by the Southern Poverty Law Center.

Geller, who lives in New York City under constant guard, said she will never give up her campaign to warn the world about radical Islam.

“I take nothing for granted. I’m aware of the risks,” Geller noted. “But I would rather die standing up than on my knees.”

Ayaan Hirsi Ali, a Somali-born, Dutch-American, routinely calls for a reformation of Islam, asserting that “we cannot get away from the reality that there is something within Islam that inspires, incites and mobilizes millions of people to engage in what our president euphemistically calls ‘violent extremism.’”

In 2004, Ali worked with Dutch filmmaker Theo van Gogh on a highly contentious short movie “Submission” regarding the subjugation of women under Islam. Death threats against the pair ran rampant and Van Gogh was soon murdered in the streets of Amsterdam, a note pinned to his body promising that Ali would be next.

Now a fellow at Harvard’s John F. Kennedy School of Government, Ali, whose latest book, “Heretic,” was released last year, continues to rail against what she sees as the injustice of Islam.

Theo van Gogh, the great-grandson of Vincent van Gogh's brother, was killed by a Muslim fanatic in 2004 after working with Ali on the short film "Submission," which criticized the treatment of women in Islam. (Reuters)

Like Ali, Raheel Raza left her Islamic homeland and discovered freedom in North America. Twenty-eight years ago, she moved with her husband and two children from Pakistan to Canada, where she is an activist for the rights of Muslim women.

“I am most passionate about human rights and women’s rights in the Muslim world,” the Karachi University graduate and author of “Their Jihad, Not My Jihad: A Muslim Canadian Woman Speaks Out” said.

Her efforts, which include advocating for a burka ban, mixed-gender prayers for Muslims and opposiong plans to build a Muslim community center near New York’s Ground Zero, have yielded death threats, hate mail and a fatwa.

Raza does not have personal bodyguards, and is not provided protection by the Canadian government.

“Many people get full-time security, but I just leave it in God’s hands to protect me,” she told FoxNews.com. “If I allow myself to be afraid I can’t do the work I do, so I don’t wallow in the luxury of fear.

“I just look over my shoulder in the parking lot,” she said.