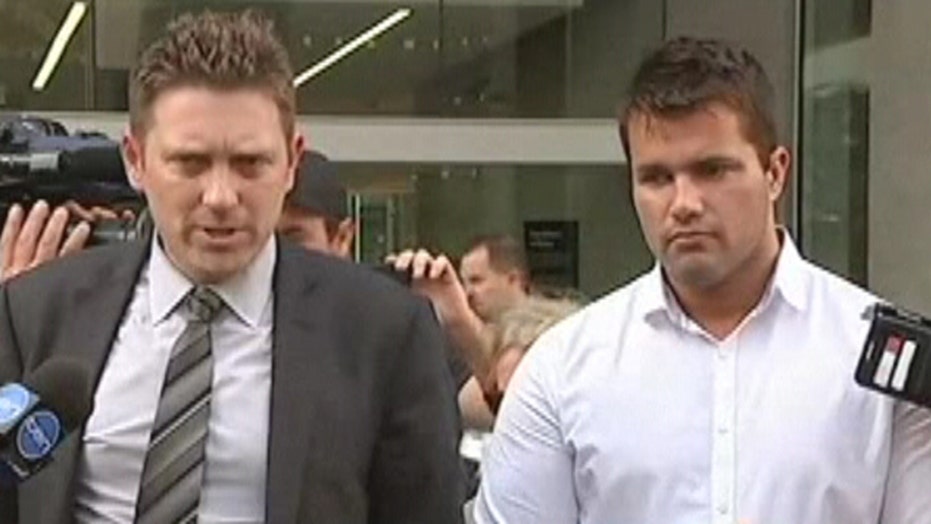 Raw video: Lawyer for Gable Tostee speaks for client after he was cleared on murder charges; Spokesperson delivers statement from Warriena Wright's family

An Australian man was acquitted Thursday in the murder of a young woman who fell from his balcony two years ago after the two met through the popular dating app Tinder.

What, exactly, caused 26-year-old Warriena Wright to plunge 14 stories is not known, but the encounter between the couple -- much of which was captured on an audio tape -- has prompted the question: Are mobile dating apps safe?

The answer is complicated, according to dating experts and behavioral psychologists.

"These incidents are very rare," said Sameera Sullivan, a relationship expert and psychologist who founded the matchmaking service, Lasting Connections, in 2012.

"There’s always going to be bad people out there," said Sullivan. "When you meet a random person at a bar, you don’t know anything about them – you don’t have the opportunity to look them up on social media or investigate anything.

"With Tinder and other apps, you have the chance to do a lot of research if you know their last name," she told FoxNews.com. "If done right, there’s more pros to Tinder and dating apps than there are cons. But you have to be careful."

Tinder date found NOT GUILTY of killing Warriena Wright after she plunged 14 floors to her death https://t.co/WCKOHWnAT1 pic.twitter.com/2pYz3y898X

Tinder, which is currently in 196 countries, boasts about matching 26 million people each day. The app sees some 1.4 billion swipes a day and is responsible for a total of 10 billion "matches" to date -- though individuals, like Sullivan, say the marriage success rate on apps is low.

"The people we meet change our lives. A friend, a date, a romance, or even a chance encounter can change someone’s life forever," Tinder says on its website. "Tinder empowers users around the world to create new connections that otherwise might never have been possible. We build products that bring people together."

The FBI said it does not currently have statistics on U.S. crimes related to dating apps. In the U.K., however, authorities released alarming figures earlier this year showing that crimes linked to dating apps are on the rise -- increasing more than sevenfold in the last two years.

The statistics, released in January, were gathered from reports by at least 30 police forces across England and Wales. The crimes, which include rape and attempted murder, specifically mention apps like Tinder and Grindr -- which caters to gay men.

Gable Tostee, 30, from Queensland, Gold Coast, was charged with the August 8, 2014, murder and manslaughter of Wright, whom he had met on Tinder. Prosecutors said Wright died trying to climb off his 14th-floor balcony in an effort to escape him.

Prosecutor Glen Cash told the jury that Tostee did not throw Wright to her death, but intimidated and threatened her to an extent that she felt the only way to escape was to climb down from his balcony.The court heard an audio recording made on Tostee's phone that captured an altercation between the pair, as well as the fall. Tostee's defense team, however, said Wright -- a New Zealand tourist -- had become increasingly erratic and aggressive toward Tostee after a night of drinking and intimacy.

In England, a 59-year-old police officer was murdered after he arranged to meet another man through Grindr. Stefano Brizzi -- who was obsessed with the American TV drama "Breaking Bad" -- strangled officer PC Gordon Semple inside his London apartment before dismembering his body and dissolving it in an acid bath, authorities said.

In Washington state, a 40-year-old single mother was killed and dismembered inside her suburban Seattle home in April allegedly by a man whom she had met on Tinder. John Robert Charlton, 37, was charged with murdering Ingrid Lyne, who was reported missing from her home after her ex-husband arrived with their children and she wasn’t home.

Charlton reportedly had a criminal history spanning six states and his parents had sought a restraining order against him in 2006, saying he had taken the movie “Hannibal” — about a serial killer — from a shelf and told his mother she should watch it and “beware.”

"You never meet someone alone at a home," said Darby Fox, a behavioral psychologist from the New York City area. "Use common sense and meet in a public place."

"Tell someone where you're going and what you're doing," she said. "It’s just a basic safety rule."

While some in law enforcement say dating apps are safer than traditional ways of meeting -- because there is a digital record of communication between two people -- others, like Fox, argue they can be just as dangerous.

"Somebody psychologically deranged enough to dismember another person doesn’t think about this. They don’t care about getting caught," she said. "You have no way of knowing who that person is you're meeting. These apps allow for people to create false personas."

One 30-year-old New York City woman, who asked not to be identified, said the apps have a created a "culture of disposability," in which people can quickly move from one partner to the next or, in some cases, keep multiple partners at once "just by swiping their phones."

"Is the guy married? Is he dating five other women? Is he just looking for sex?" said the woman, who spent six months on Tinder and another dating app known as Bumble before taking herself off.

"Violent crime might be rare but the emotional distress that stems from this app culture is real, widespread and deeply troubling," she said.