Some Texas ranchers are struggling to find workers because of fears at the border. Title 42, a Trump-era COVID-19 border policy, is held up in federal court but could be just two weeks away from a halt.

EAGLE PASS, Texas – Many people living in border communities such as Eagle Pass, Texas, are from Mexico or have family in Mexico. They say they feel for migrants seeking asylum but warn the pace at which illegal immigration is increasing is unsustainable.

Some Texas ranchers are struggling to find workers because of fears at the border. Title 42, a Trump-era COVID-19 border policy, is held up in federal court but could be just two weeks away from ending.

Mike Hayes’ Double M ranch is less than a mile from the U.S.-Mexico border.

Double M Ranch is a half-hour drive from the city of Eagle Pass. The owner said fences have been damaged by migrants trying to cross over from Mexico.  (Fox News)

"We run Angus cattle here, and we got racehorses," Hayes said. "We sell hunts here like deer hunting, duck hunting and things like that, so it all generates the revenue that keeps it going."

Hayes said migrants have tied clothing on these ranch fences to make it less painful to cross. Remnants of fabric remained on the tops of his fence. The surge of migrants coming over from Mexico is starting to hurt his business.

"They come through, and they cut our fences, and they leave trash everywhere," Hayes said. "The livestock gets out on the road and might be hit by cars and things like that."

Just like much of the rest of the country, he’s got a labor shortage problem, but for a different reason.

A pair of rope handcuffs was left behind by law enforcement on Double M Ranch. The handcuffs are used to place migrants in custody when border patrol apprehends them on U.S. property.  (Fox News)

"They won't come anymore. They're scared of it down here," Hayes said. "They don’t know who’s coming across. They don’t know if they’re gang members or … the crimes they’ve committed."

Hayes said he's used websites in an effort to find ranch help, and even people from Eagle Pass don’t want to make the trek out to his ranch. He has horse trainers from other states who traveled last summer to help train his horses but won’t return this year. Hayes said he even hired a private security team to look out for trespassers.

It’s not just Republicans worrying about the end of Title 42. Eagle Pass Mayor Pro-Tem Yolanda Ramon, a Democrat, said the community has been concerned. 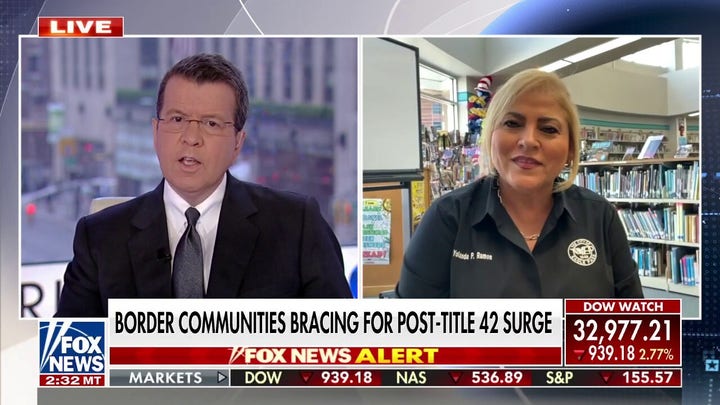 "I can guarantee that the migrant impact could be even more than double. If Title 42 expires, if President Biden doesn’t do anything to stop that … trust me, we are going to see things we have never seen in Eagle Pass here before," Ramon told "Your World with Neil Cavuto" on Friday.

De La Torre said they're also dealing with stash houses in Eagle Pass, where human smugglers are keeping illegal immigrants until it’s safe to move them to buses transporting them to other cities.

"You got everybody coming through here. We don't know who they are, and our wives and kids are here by themselves," Hayes said.

A federal judge stopped the lifting of Title 42 in late April. The next court hearing on the matter is schedudled for later in May.

Mills Hayes joined Fox News in 2022 as a multimedia reporter in Minneapolis.