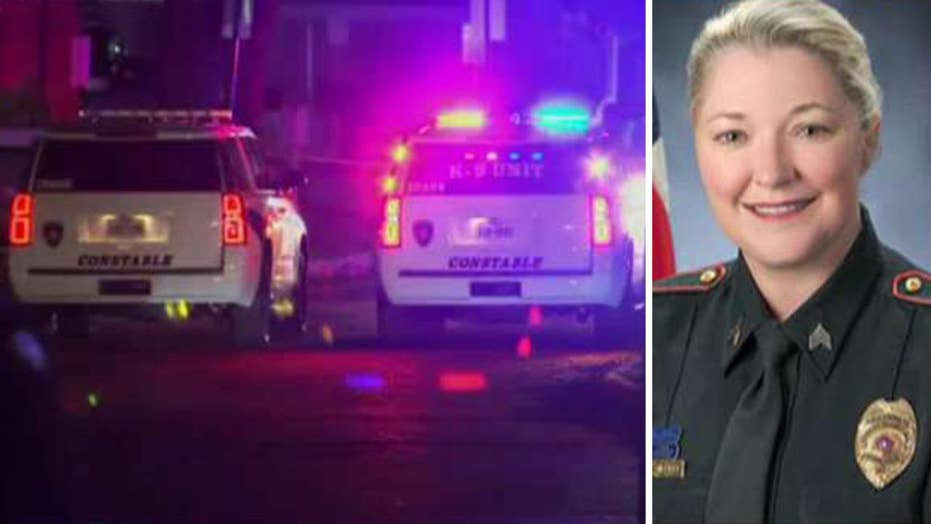 A manhunt intensifies for the suspect in a deadly hit and run during a traffic stop in Nassau Bay, Texas.

Police in Texas are on the hunt Wednesday for a suspect who allegedly struck and killed an officer with his vehicle while fleeing a traffic stop Tuesday night.

The man, identified by police as 21-year-old Tavores Henderson, likely still has one handcuff attached to his wrist, authorities say. Henderson is accused of driving into 43-year-old Nassau Bay Sgt. Kaila Sullivan outside an apartment complex in the Houston area. His vehicle later was discovered abandoned and Sullivan, a 15-year veteran of the department, died at a hospital.

Cromie says Sullivan was assisting other officers with a traffic stop Tuesday night when they discovered that Henderson was wanted on a domestic violence warrant.

Before police could make an arrest, Henderson escaped and hit Sullivan as he was speeding off, Cromie said.

Harris County Sgt. Dennis Wolfford -- whose office is now leading the search for Henderson -- said a warrant for felony murder has been issued for him.

“Turn yourself in. We will eventually catch up to you,” Wolfford said Wednesday.

Harris County Sheriff Ed Gonzalez said Sullivan's death was “another grim reminder" of how dangerous police work can be, noting that the community is still mourning the Saturday death of a Houston police officer and the September shooting death of a Harris County deputy.

According to court records viewed by the Associated Press, the misdemeanor arrest warrant Henderson was wanted on is from an alleged assault of his ex-girlfriend, whom authorities say Henderson grabbed and scratched as he tried to kidnap her Sunday.

Before that alleged incident, Henderson had been indicted on a felony charge of aggravated assault-family member for allegedly choking his ex-girlfriend and threatening her with a firearm on Nov. 16, 2018, in her car as she was at his apartment complex.

Henderson had “yelled ‘Open the door or I’ll shoot you.’ The (ex-girlfriend) told (police) that she had previous encounters with the defendant threatening her with a gun and shooting at her,” according a probable cause affidavit of the 2018 charge.

Henderson had been free on a $50,000 bond related to the 2018 assault charge when the arrest warrant on the charge related to the alleged Sunday assault was issued.