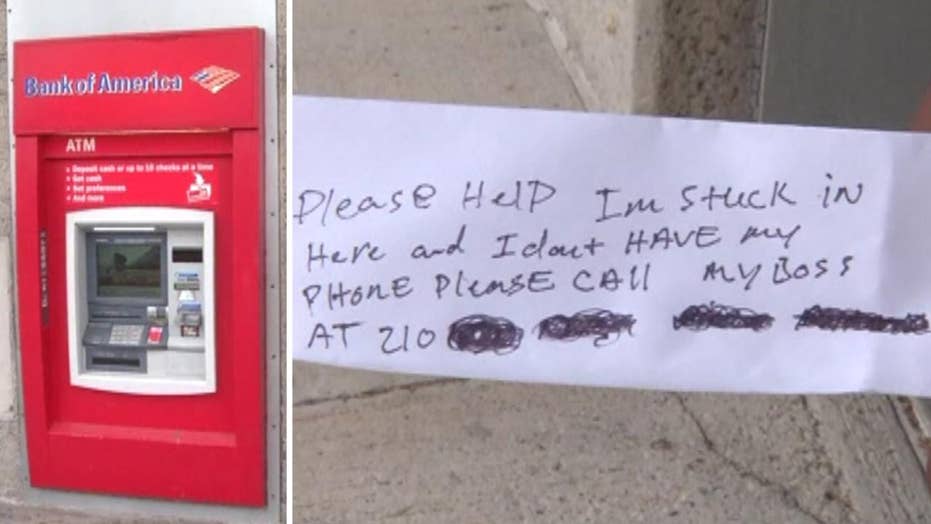 Customers at Bank of America money machine shocked to get note from contractor locked in ATM room in Corpus Christi, Texas

Shocked customers at a Texas ATM got more than cash from the money machine when a technician trapped behind it slipped notes through the receipt slot begging for help, police said.

Corpus Christi police said the unnamed man, who is a contractor, got stuck in an ATM room at a local Bank of America while attempting to change the lock on the machine, according to Fox 8.

“He left his phone in his truck, he’s installing a new lock on the door, and he gets locked inside the building where the ATM is,” Officer Richard Olden of Corpus Christi Police told KRISTV.

People were going to the ATM to get money when the man stuck inside slid notes through the receipt slot saying: “Please Help. I’m stuck in here, and I don’t have my phone. Please call my boss.”

Officer Olden said at first people thought the note was a joke, but somebody eventually took it seriously and called authorities.

“We come out here, and sure enough we can hear a little voice coming from the machine,” Olden said. “So we are thinking this is a joke. It’s got to be a joke.”

Olden said the man was rescued and was unharmed.

“Everyone is okay, but you will never see this in your life, that somebody was stuck in the ATM, it was just crazy,” Olden said.