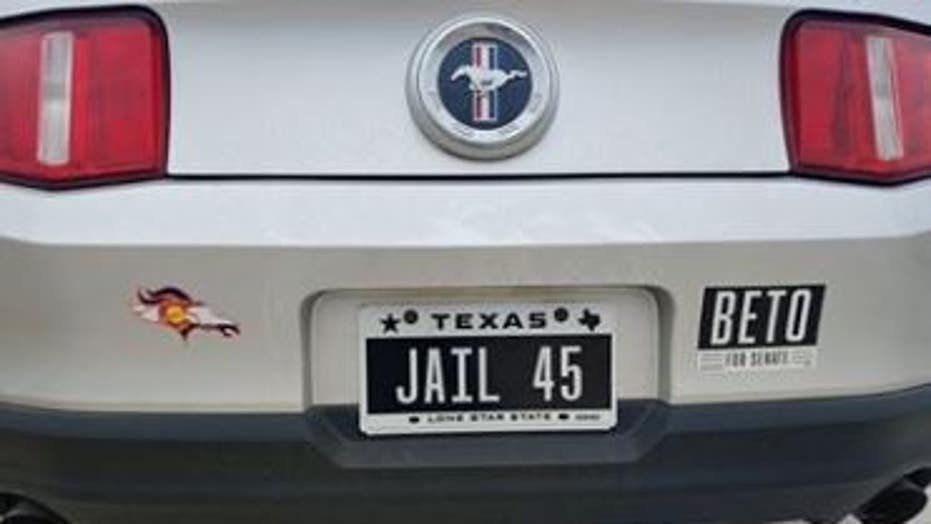 A Texas man says his family has received 'nasty' messages after the state's Department of Motor Vehicles forced him to remove his controversial license plate.

Jerry Balkenbush's vanity plate, which is now being revoked, reads "Jail 45" -- a reference to Trump, the 45th president of the United States.

The reported Air Force veteran says he got the plates in November as a form of peaceful protest, but after receiving a complaint back in December, he said the state determined it was derogatory.

“Someone said, ‘OK, that’s OK,’ and then one complaint says, ‘OK, you’ve got to take them off’ when to me, that’s my freedom of speech, my First Amendment rights,” Balkenbush told Dallas-Fort Worth's WFAA.

After he posted photos of the plate to Facebook, Balkenbush says they prompted hate from people online who messaged his family.

“I did not foresee the hate coming, the nasty words and profanity towards me and towards my wife,” he told the station. “I feel like this is the new normal in our politics.”

A DMV rarely issues a vanity plate only to take it back. It's happened just 12 times in the last fiscal year, DMV spokesman Adam Shaivitz told the outlet. The Texas DMV approves roughly 1,000 vanity plates each week and rejects hundreds each month.

Balkenbush has 30 days to take the plates off, according to KXAS Fort Worth.