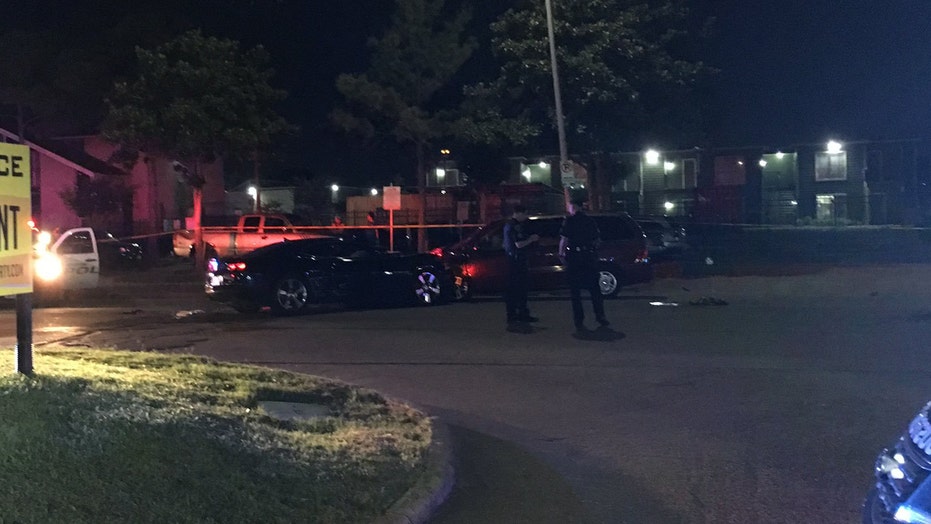 A Texas man who leaped onto the hood of his car in a selfless bid to stop a carjacker trying to speed away with his wife trapped inside may end up losing both legs after the desperate crook intentionally crashed the vehicle -- pinning the heroic husband between two cars, officials said.

Houston police responded to a gas station Monday night after receiving reports about the seriously injured man and the carjacking.

According to Houston’s KHOU, the husband, who was not immediately identified, pulled into the gas station at around 8:15 p.m. and exited the Chevrolet Camaro with the engine running and his wife sitting inside.

Houston police released the following image of a crime scene where a man was pinned between two cars after attempting to stop a carjacker from making off with a vehicle with his wife still inside. (Houston Police Department )

Suddenly, a man jumped into the car and hit the gas -- but he didn't make it far before the husband reportedly bounded onto the hood of the car in an action hero-style attempt to thwart the thief.

The carjacker sped up, purposefully crashing the Camaro into a minivan and pinning the man's lower body, Houston’s FOX26 reported. A male driving the minivan was treated for minor injuries, officials said. It was not clear from initial reports if the minivan was stopped or in motion at the time of the collision.

The crook, a description of whom wasn't immediately provided by police, fled the scene on foot and remained at large Tuesday.

First responders applied a tourniquet to the injured husband, who suffered “serious wounds,” Houston police said. He was transported to an area hospital and police say he'll lose at least one of his legs, Click2Houston reported.

The man's wife was also taken to the hospital and treated for “lesser injuries.”