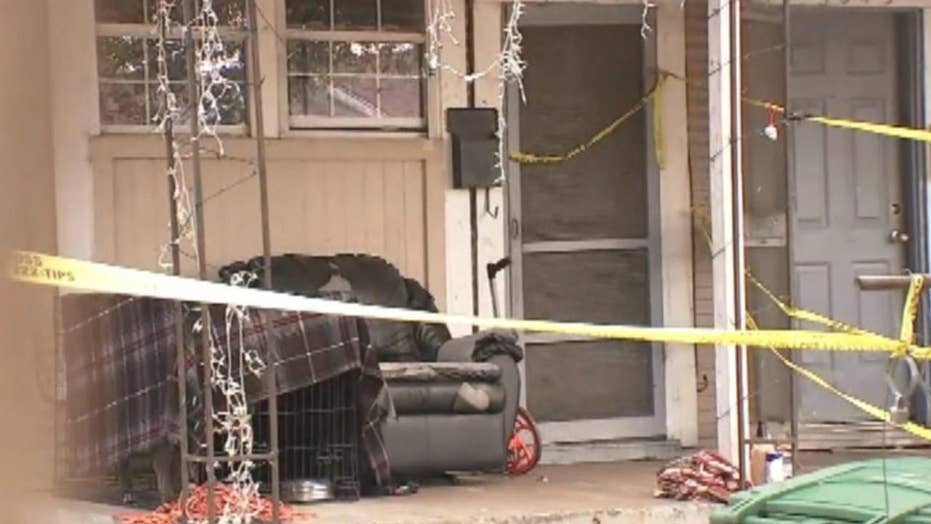 Three men were killed and two others were injured after dozens of shots were fired by a homeowner in Texas during a home invasion early Sunday, officials said.

The male resident inside then grabbed his weapon and opened fire at the men.

Houston Police said the homeowner appeared to have been defending himself.

OREGON GIRL, 8, THANKS 'ANGEL' FOR STRENGTH, POLICE FOR SAVING HER FROM MAN WITH AX WHO KILLED 4 IN HOME

A shootout then took place between the groups, according to police.

The suspects forced themselves into the home, triggering a shootout, police told local media. (KTRK via NNS)

A neighbor told KTRK he heard the shots and went outside to make sure he wasn't dreaming.

"I heard around five or six gunshots," he told the television station. "I'm pretty sure there were more before that."

One of the suspects was found dead in front of the house, while the others fled in an SUV and on foot. Police told KPRC that the SUV crashed into a pole nearby and a second suspect was found dead inside.

Three men were killed and two were injured after a homeowner opened fire during a home invasion in Houston on Sunday. (KTRK via NNS)

A third suspect who was in the SUV fled, collapsed in the street, and later died, KPRC reported.

The fourth and fifth suspects, who were also injured in the shooting, were taken to the hospital. The incident remains under investigation by police, who did not release additional information. The homeowner was not injured.