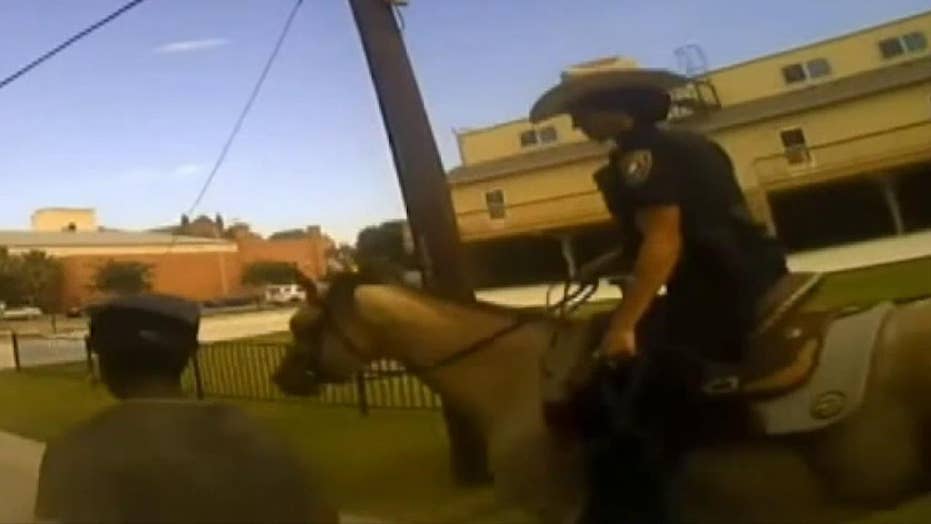 The Galveston, Texas Police Department came under scrutiny after footage of an arrested trespassing suspect being walked to the department behind officers on horseback went viral.

A Texas police officer on horseback could be heard saying escorting a black suspect into custody with a rope linked to his handcuffs would "look so bad" to anyone watching -- an audience which significantly expanded as footage of the controversial arrest was released by officials Wednesday.

The Galveston Police Department released the body camera footage of the Aug. 3 arrest of 43-year-old Donald Neely after the Galveston County Sheriff’s Office concluded its investigation into the incident.

“I’m glad we’ve got these investigations behind us," Galveston City Manager Brian Maxwell told FOX26. "I’m most happy about getting the videos released. I’ve been the one saying all along I want these things released because there’s no amount of what I think or what you think that matters. Everybody needs to look at these and come to their own conclusions."

Neely was arrested for criminal trespassing at the Park Board of Galveston on Aug. 3. The two officers "clipped" a rope to his handcuffs and led him through downtown streets to a mounted patrol staging area, the department said in a statement shortly after the arrest. A transport unit wasn’t immediately available at the time.

The images shared online of the two white officers leading Neely using a rope tied to his handcuffs — reminiscent of pictures showing slaves in chains — sparked public outrage at the time. Protesters demanded that the officer's body camera footage be released.

Two mounted Galveston Police officers transported a criminal trespassing suspect by a rope clipped to his handcuffs in August, the department said. (Handout)

The two videos released Wednesday from Officers Patrick Brosch and Amanda Smith totaled about 27 minutes. Both officers can be heard contemplating whether they should walk Neeley to jail or get their truck before doing so.

At one point in one of the videos, Brosch could then be heard saying, “This is gonna look really bad.”

Just before the officers started leading Neely away, Brosch can again be heard saying, “This is gonna look so bad.”

The two officers led Neely for several blocks until they reached a parking lot where their truck and horse trailer were located.

Galveston Police Chief Vernon Hale, who is black, said after the arrest that the officers on horseback are trained to use such techniques in crowd control situations, but the officers displayed "poor judgment in this instance" and should have waited for a transport unit. He apologized and said the department has since changed its policy.

The police department added the videos are released in their entirety but do not have audio during the first two minutes because of the configuration of the body camera equipment.

“Once an officer activates the camera, the previous two minutes are captured on video. The camera is not constantly recording and storing audio due to storage limitations,” the police department wrote.

Department officials said they understand the negative perception of how they transported Neely during his arrest and will no longer utilize the practice.

Maxwell told FOX26 that the department is now working on new policies for mounted patrol units.

"The mounted patrol in the form it was being used was relatively new to us when all of this occurred.  We typically used our mounted patrol for ceremonial purposes," he told FOX26. "So I believe when the new policy is released it remains to be seen what the chief will come up with."

Hale said in a statement he is studying the report and will use the findings to make decisions about the next steps for the Galveston Police Department.