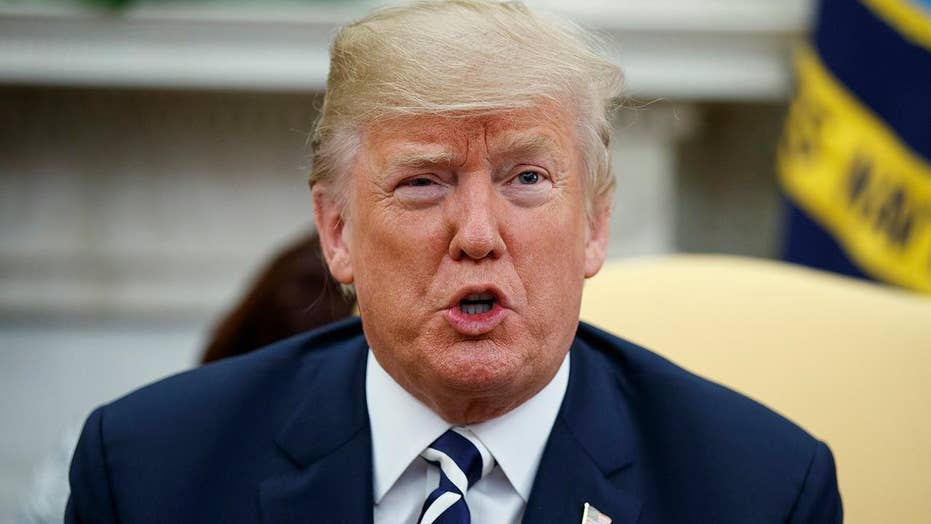 President Trump: The bombings in Austin are terrible

President Trump comments on the Austin bombings and his phone conversation with Putin.

The person responsible for a string of bombings in Texas this month is "very sick," President Trump said from the White House on Tuesday as he vowed to "get to the bottom of it."

Trump's comments come on the heels of a package exploding at a FedEx plant in Schertz, Texas earlier in the morning and authorities probing a second Texas FedEx facility, in Austin, due to a report of a suspicious package. There have been five blasts in March – four in Austin – that have killed two people and injured several others.

Authorities said the parcel bombs appear to be linked to the Austin explosions.

In a statement, FedEx said the person responsible for the package that detonated at the facilty also shipped a second package "that has now been secured and turned over to law enforcement."

"We are thankful that there were no serious injuries from this criminal activity," the company said. "We have provided law enforcement responsible for this investigation extensive evidence related to these packages and the individual that shipped them collected from our advanced technology security systems."

The president said authorities are working hard to find the person, or people, responsible.

A police officer stops a vehicle at a check point in front of a FedEx distribution center where a package exploded, Tuesday, March 20, 2018, in Schertz, Texas. (AP Photo/Eric Gay)

Trump's comments come as law enforcement appeared to be making progress in the bomb probe.

The Sunset Valley Police Department told Fox News in an emailed statement that the FBI is investigating a "confirmed link" between packages involved in the Austin bombing investigation and a mail delivery office in Sunset Valley, an Austin suburb south of downtown.

What criminal penalties could the Texas bomber face?

"It appears that the source of the suspect packages was a private package delivery office in Sunset Valley," police said in that statement that was also sent to residents. The department said officers are assisting with traffic control in the area, but at this time there are "no known public safety threats to Sunset Valley residents, visitors or shoppers."

The report of the suspicious package at the FedEx facility in Austin came in at 6:19 a.m. on Tuesday, according to Austin Police Officer Destiny Wilson.

Wilson said "due to the nature of the incident," federal law enforcement partners are investigating the suspicious package. Wilson did not elaborate on what the package may have contained, but warned members of the public to report "anything out of the ordinary" to police.

The blast in Schertz, located about 70 miles south of Austin, came a day after authorities said a "serial bomber" is likely responsible for the explosions this month, the latest of which injured two people Sunday night after they crossed a trip wire possibly made with fishing line.

The men injured Sunday night in the explosion in the southwestern Austin neighborhood of Travis Country, ages 22 and 23, are white, unlike the victims in the three earlier attacks, who were black or Hispanic. A family member of one of the latest bombing victims in Austin told the AP on Monday the blast left what appeared to be nails stuck below his grandson's knees.

While authorities have not yet identified the victims of Sunday's explosion, William Grote said his grandson was one of the two people hurt in the blast.

Investigators on Monday March 19, 2018, work at the scene of a bomb explosion on Dawn Song Drive in Austin, Texas, that seriously injured two men Sunday. (Jay Janner/Austin American-Statesman via AP)

"Well he and his friend were riding a bicycle about a block from their house and one of them was off the curb right in the street. The other one was on the sidewalk walking and it was so dark they couldn't tell and they tripped and set off this explosion, didn't see it," he told the AP. "It was a wire and it blew up."

A map shows the location of each of the four bombings in Austin. (Fox News/Bing)

As of Monday, the reward for information leading to an arrest in the deadly explosions had risen to $115,000. Manley said more than 500 officers, including federal agents, are involved in the investigation.

Austin Police said on Tuesday they have responded to over 1,200 suspicious calls since March 12.