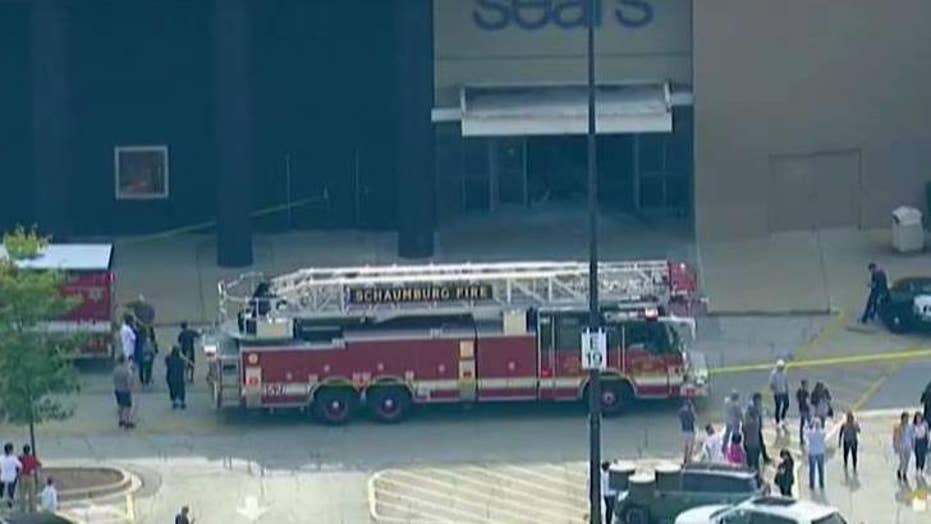 SUV drives through mall in Illinois, suspect in custody

Police say a car entered through the Sears at the Woodfield Mall and drove aimlessly through the shopping center; former NYPD Detective Pat Brosnan weighs in.

A man accused of driving an SUV through a suburban Chicago mall earlier this month who sent frightened shoppers scurrying for cover is now facing a state terrorism charge, officials announced Sunday.

Javier Garcia, 22, of Palatine, Ill., was charged with one felony count each of terrorism and criminal damage to property, according to a statement issued to Facebook by the Schaumburg Police Department. A judge denied him bail, Fox 32 reported. Police said early Sunday morning the Cook County state's attorney had authorized the charges against Garcia.

"The police investigation revealed Garcia was acting alone," police said in a statement. "A motive has not been determined. Police have no reason to believe Garcia was targeting any specific person and/or store within Sears or Woodfield Mall."

Garcia allegedly crashed a black Chevrolet Trailblazer near Sears and Rainforest Cafe at the Woodfield Mall around 2:30 p.m. on Sept. 20 and then drove through the ground level of the shopping center.

This Friday, Sept. 27, 2019 photo from the Schaumburg, Illinois, Police Department shows Javier Garcia of Palatine, Illinois. Garcia, accused of driving an SUV through a suburban Chicago shopping mall on Sept. 20, has been charged with terrorism. (Schaumburg Police Department/WFLD)

The vehicle then proceeded to speed through the mall, crashing into several displays.

The 22-year-old was stopped by shoppers before officers arrived and took him into custody, police said. No one was struck by the car, but three people were taken to a hospital for “very minor” injuries, police said at the time.

Video of the incident showed shoppers running for cover in the corridors of the Woodfield Mall as the black Chevrolet Trailblazer plowed through. The video posted to Twitter has garnered over 10 million views.

After his arrest, police said the suspect was sent to AMITA Health Behavioral Medicine Institute for treatment but was released on Sept. 27. He was transferred to the custody of Schaumburg Police upon his release, officials said Sunday.

Shortly after the incident, Schaumburg Police Chief Bill Wolf said the suspect may have been suffering from a medical condition.

Under Illinois law, the Class X felony of terrorism can apply if the suspect is believed to have caused more than $100,000 in damage to any building containing five or more businesses, according to a statement issued by Schaumburg Police Sgt. Karen McCarthy.

No federal charges have been brought against Garcia.