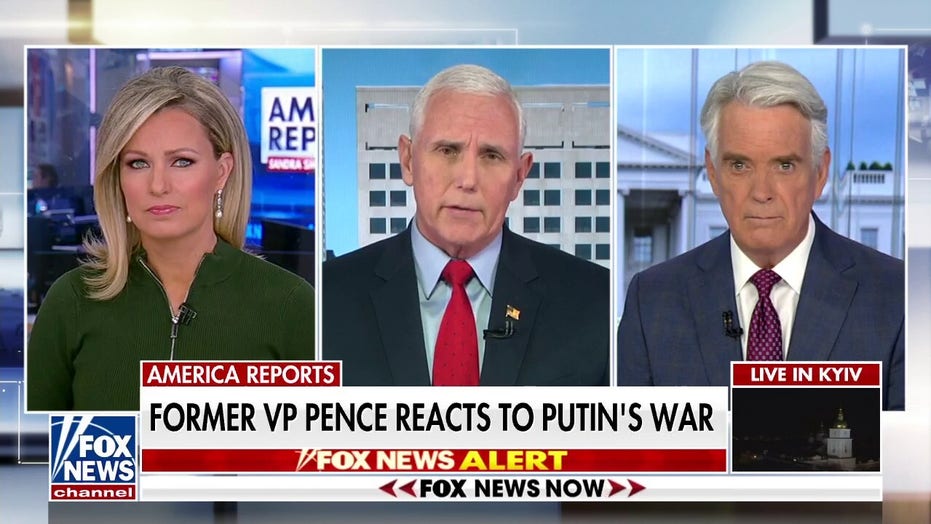 Terror and chaos have taken hold in Ukraine since the Russian invasion Thursday, leaving many scrambling for safety, residents told Fox News Digital.

"I’m shocked," said Cherry Markovitch, who lives on a main street in Kyiv with her husband, Ariel Markovitch, and their three children. "Shocked would be an understatement. Traumatized is a better word." The couple share a 5-year-old, a 3-year-old and a 5-month-old.

Like many residents, she and her family slept in a parking garage under their building with their neighbors Thursday night, as sirens wailed and bombs rained down. Many buildings do not have bomb shelters, which has driven citizens into underground parking garages and metro stations.

A wounded woman stands outside a hospital after the bombing of the eastern Ukraine town of Chuguiv on Feb. 24, 2022. (Aris Messinis/AFP via Getty Images)

"We hear things exploding, we hear military airplanes above our heads. I was having panic attacks last night nonstop," she told Fox News Digital in a phone interview. ‘We’re trying to protect the children as much as we can, but they’re so stressed out."

The native of France, who has lived in Ukraine for years, said she and her family decided to stay in the city to help their community. Her father-in-law is the chief rabbi of Kyiv, and she helps run the local Chabad house. For weeks she stocked up on dry food, water and other supplies – but never expected this outcome, she said.

CRITICS FEAR PUTIN WILL LOOK TO EXPAND BEYOND UKRAINE

"We didn’t think it would get to the point where it is so dangerous and war would actually happen," Markovitch said.

Normally from the window of the family’s apartment, they see a bustling street filled with cars and people. Now, she said, "The city is ghosted."

"Most people left, or they don’t come out of their houses," she said. "No one is in the street. Except this morning I saw a few people running with suitcases."

The Markovitchs and their children were rushing to the local synagogue before the weekly holiday of Shabbat began, where they plan to hunker down with about 50 other people who are too afraid to stay at home alone.

It all happened so quickly that the family is now trapped in the country. "For now it's impossible to leave Kyiv," Ariel Markovitch said. "We don’t know what we will do."

A Turkish butcher, who has lived in Kyiv for seven years, said he was kept awake all night by explosions. He asked that his name be withheld due to safety concerns. "It’s so dangerous and it’s very scary," he told Fox News Digital through a Turkish interpreter. "I’m terrified it will get worse." He said all the shops are closed, including his.

"Everyone is stunned," he added. "No one was expecting this."

Russian troops have poured into Ukraine from Belarus in the north, from Russia to the east and from Crimea in the south in the largest ground war in Europe since WWII.

Russian forces have seized a strategic airport outside Kyiv and are encircling the capital, the country’s seat of government. Shelling has damaged buildings, bridges and schools, and there have been reports of hundreds of casualties.

"We thought the world would help us, but it feels like they’re waiting for everything to turn into ashes first."

In a televised address before launching the attack, Putin said the war could have been avoided if Ukraine pledged to never join the U.S.-led North Atlantic Treaty Organization.

But Igor Kolinets, president of the Ukrainian National Home of New Jersey, said his country has a right to decide its own destiny.

"We want our freedom," he said. "We want to choose whether we’re with the former Soviet Union or Europe. We want to be with Europe."

His sisters, brother and cousins are scattered across Ukraine but in areas that have not been hit hard by Russian forces.

Kolinets' family told him that they and other citizens waited in long lines to pick up guns and ammunition so they can fight for their homeland.

"People there are saying we will defend our country to our last drop of blood. We are not going to give up."

Meanwhile, Ukraine President Volodymyr Zelenskyy remains in Kyiv in an undisclosed location, after telling European leaders he is Russia’s No. 1 target.

In the video posted to Twitter, Zelenksyy, flanked by leaders and ministers in his government, said they were still in the nation's capital and no one had fled. "We're all here," Zelenskyy said. "We are in Kyiv. We are defending Ukraine."

Rabbi Mordechai Bald of Lviv, a city in western Ukraine that borders Poland, said people are flooding in from Kyiv and other parts of the country.

"It feels like the whole of Ukraine is here running away from death," he said. "There is a feeling of the Holocaust in Kyiv."

He added that every hotel and apartment bed in Lviv is taken, and people are sleeping at hospitals. The roads are so snarled with traffic and there’s a shortage of gas, that the journey from Kyiv to Lviv – about 335 miles – will take three to four days now.

"It’s extremely frightening, people are just petrified," Bald told Fox News Digital. "The lines at the gas station, those that still have gas, are a kilometer long."

Firefighters work at a damaged residential building at Koshytsa Street, a suburb of the Ukrainian capital Kyiv, where a military shell allegedly hit, on Feb. 25, 2022. (Genya Savilov/AFP via Getty Images)

At the border with Poland, it's so congested that people are abandoning their cars and walking to the checkpoint. Men between the age of 18 and 60 are barred from leaving Ukraine.

"A friend told me he turned back because there is no use," he said.

Bald, who heads the only synagogue in the city, Bais Aron V’Yisroel, has told Jews in other parts of the country to get out as quickly as they can even if it means traveling on the Sabbath. During the weekly holiday, Jews are forbidden from using cars or carrying luggage.

"Thousands of Jews are desecrating Shabbat, running for their lives from every border."

"Life is the most sacred thing and that is what we fight for," he said.

Though there has been the consistent wail of sirens, alerting to an imminent air raid, Bald said he had not heard any bombings yet.

Bald, whose ancestry goes back 400 years in Lviv, which was once part of Poland, said Ukrainians "feel terribly betrayed by the world."

"The people who were supposed to help us showed weakness," he said, without referencing the U.S. directly. "We thought the world would help us, but it feels like they’re waiting for everything to turn into ashes first."