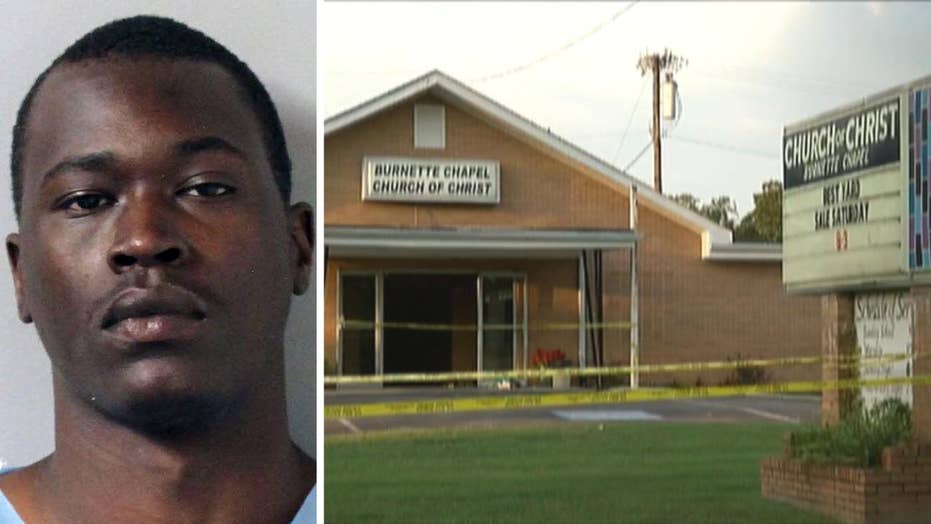 A Sudanese immigrant admitted to being the triggerman who killed one parishioner and seriously injured seven others Sunday at a Nashville-area church, according to a police affidavit ahead of his first court appearance.

Emanuel Kidega Samson, of La Vergne, told cops during an interview that he “fired upon the church building” after arriving there with a handgun, the Tennessean reported, citing the affidavit.

Samson, who was been charged with one count of murder and is likely to face other charges, will appear in Davidson County General Sessions court Wednesday and is being held at a county jail without bond.

His admission comes as police are searching for a motive for the shooting at the Burnette Chapel Church of Christ in Antioch. Samson, 25, purportedly posted several cryptic messages on his Facebook page in the days leading up to the attack.

Photos from a Facebook page under Samson's name seemed to show him lifting weights and showing off his physique, with the words "unrestricted paroxysm” underneath, meaning a sudden attack or violent expression of emotion, the Tennessean reported.

A post earlier Sunday read: "Everything you've ever doubted or made to be believe as false, is real. & vice versa, B." Another post read, "Become the creator instead of what's created. What you say, goes."

Police have not yet commented on the posts.

When he entered the church Sunday, Samson brought in a .40-caliber handgun and a 9mm handgun, according to the Tennessean. Police said during a press conference Monday that Samson also had an unloaded semi-automatic AR-15 rifle, as well as another handgun, but found no ammunition for the rifle.

Authorities said Samson was previously employed as a licensed unarmed security guard, and took a class on Friday to renew that license.

"The Memphis FBI Field Office's Nashville Resident Agency, the Civil Rights Division, and the US Attorney's Office for the Middle District of Tennessee have opened a civil rights investigation into the shooting at the Burnette Chapel Church of Christ in Antioch, Tennessee. The FBI will collect all available facts and evidence," FBI Memphis told Fox News on Sunday.

Witnesses told police that they heard gunshots from the church’s parking lot moments after Samson entered the building.

The pastor shouted "Run, run, gunshots!" and congregants hid under pews or in bathrooms, The Associated Press reported.

Burnette Chapel Church of Christ member Minerva Rosa said members were talking about the success of their yard sale the previous day when they heard gunshots. The church pastor, David Spann, 60, then shouted for everyone to run, according to a witness.

Samson entered the church from the back after fatally shooting a woman outside, police said. He then walked through the church silently, shooting six more people before an usher subdued him, police said. Police later recovered another pistol and a shotgun from the suspect's vehicle.

Rosa said the reading that day had been from Luke, Chapter 8, and she recalled the part about a woman who touched Jesus and was cured of bleeding.

By the end of the shooting, she was on her knees, her dress stained with blood, putting pressure on the gunshot wound in Pastor Spann's chest. She and others got on their phones to call 911.

Another church member, a 22-year-old usher named Robert Engle, tackled the gunman and suffered injuries when he was pistol whipped. In the struggle, the shooter shot himself, although it wasn't clear if it was on purpose or an accident. Engle retrieved his own gun from his car and held the man until police arrived, police said.

"He's amazing," Rosa told reporters about Engle. "Without him I think it could be worse. He was the hero today."

The gunman pulled into the church's parking lot as services were ending. Melanie Smith, 39, of Smyrna, Tennessee, was killed when the shooter opened fire in the parking lot. Spann's wife, Peggy, 65, was also shot as well as William and Marlene Jenkins, 83 and 84 respectively, Linda Bush, 68, and Katherine Dickerson, 64. Police said none of the surviving victims suffered life-threatening injuries.

Dickerson was released from the hospital on Monday. The five other victims remained in the hospital.

But in a statement Engle said he did not want to be labeled a hero.

"The real heroes are the police, first responders and medical staff and doctors who have helped me and everyone affected." Engle asked for prayers for all those injured as well as the shooter.