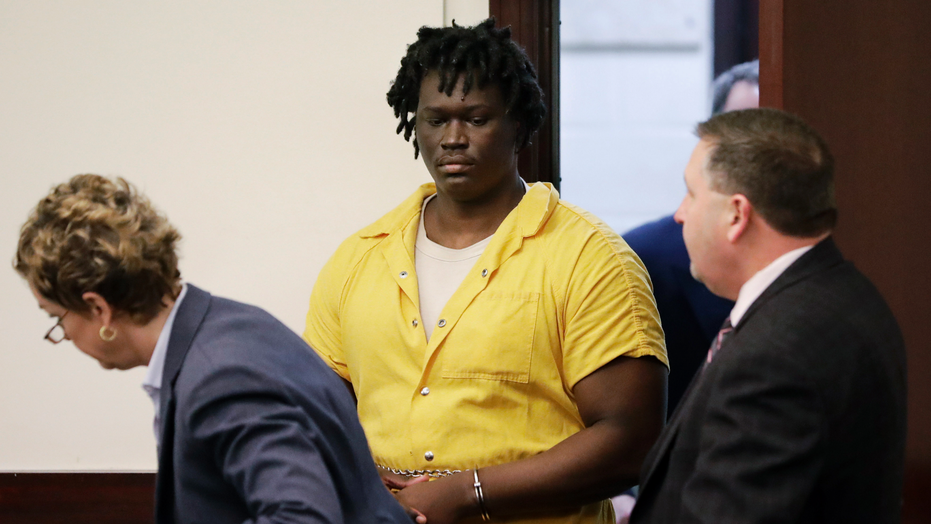 A black man accused of killing a woman and wounding seven other people at a Nashville church in September 2017 was trying to kill at least 10 white worshippers to avenge the June 2015 massacre at a historic black church in South Carolina, prosecutors said Monday.

Nashville Deputy District Attorney Amy Hunter said in her opening statement that suspect Emanuel Samson, 27, referenced the shooting carried out by white supremacist Dylann Roof at the Mother Emanuel AME Church in a note police found in his car outside the Burnette Chapel Church of Christ.

"Dylann Roof is less than nothing," the note read, Hunter said. "The blood that 10 of your kind will shed is that of the color upon the RBG [Pan-African] flag in terms of vengeance." The note included an expletive and ended with a smiley face, Hunter said.

"This state will prove beyond all reasonable doubt that on Sept. 24, 2017, this defendant, Emanuel Kidega Samson, went to the Burnette Chapel Church of Christ with the intent to murder a minimum of 10 white churchgoers on that day," Hunter said. "You won't have to take the state's word for it though."

Samson's attorney, Jennifer Lynn Thompson, claimed that Samson's true intention was to kill himself, saying that her client left a suicide note for his girlfriend and sent a goodbye video to his cousin.

"What this case is about is a man who was very sad, very suicidal, and he was looking to die that day," Thompson told jurors Monday.

A judge's order had kept many details of the case secret until trial.

At a hearing in April, it was revealed that a psychiatrist diagnosed Samson with "schizoaffective disorder bipolar type" and post-traumatic stress disorder after an abusive, violent upbringing.

Prosecutors have said they're seeking life without parole for Samson, who faces a 43-count indictment, including a first-degree murder charge. The shooting killed 38-year-old Melanie L. Crow of Smyrna, Tenn. She was shot in the church parking lot, and dropped her Bible and notes from a recently concluded worship ceremony, Hunter said.

"When Melanie Crow left the church that day to go to her car, she never got there because she had to pass by the defendant in his vehicle," Hunter said. "He shot her in her face and then three additional times in the back."

Members of the church packed the courtroom, at times becoming emotional when attorneys and witnesses recounted a Sunday filled with chaos, tragedy and heroism. Churchgoer Robert Caleb Engle has testified that during the rampage, he twice confronted the gunman, who was wearing a tactical vest and a motorcycle-style mask with a clown smile on it. Engle said he was pistol-whipped three times in the head. At one point, he pushed the gun back on the shooter and a shot fired, striking the gunman and sending him to the ground.

Engle said his father kicked the gun away, stood on the shooter's hand and told Engle to go get his gun out of his truck.

Engle came back with his weapon, put his foot on the shooter's back and stood guard until first responders arrived.

Metropolitan Nashville Police Sgt. Geoffrey Craig testified that he almost shot Engle when he saw him standing guard over Samson, only to be stopped by Engle's father.