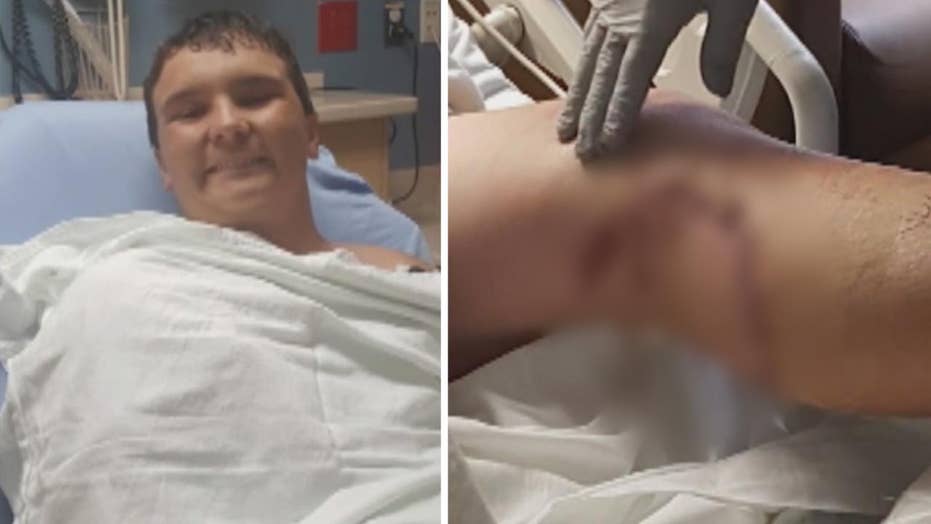 Shark attack victim wants to go on with Disney vacation

15-year-old attacked by a 7-foot bull shark while on vacation in Florida still wants to visit Disney World despite losing the lower calf on his left leg.

A family visit to Florida that was supposed to be capped with a trip to Disney World ended up taking a detour to an emergency room after a teenager was bit by a shark on Saturday.

Cody High, 15, and his family were in Florida for vacation when they stopped at Cocoa Beach to enjoy a swim in the ocean.

High told FOX35 Orlando he was walking in the water about knee-deep when the 7-foot bull shark bit his leg.

"I saw blood everywhere, and I just knew something bad had happened," High said. "People were crying, my mom was probably by far one of the more petrified ones. She was screaming, 'Oh my god! What happened?'"

The shark, which the 15-year-old said he didn’t see, left deep gashes in High's calf, as seen in pictures posted to social media.

"It just felt like a hand squeezing as hard as possible," he told FOX35. "My older brother he likes pranking me a lot, and it really felt like he just grabbed me with his hand."

The 15-year-old was released from the hospital on Monday. Family members told FOX35 they weren't going to let the incident interfere with their planned trip this week to Disney World.