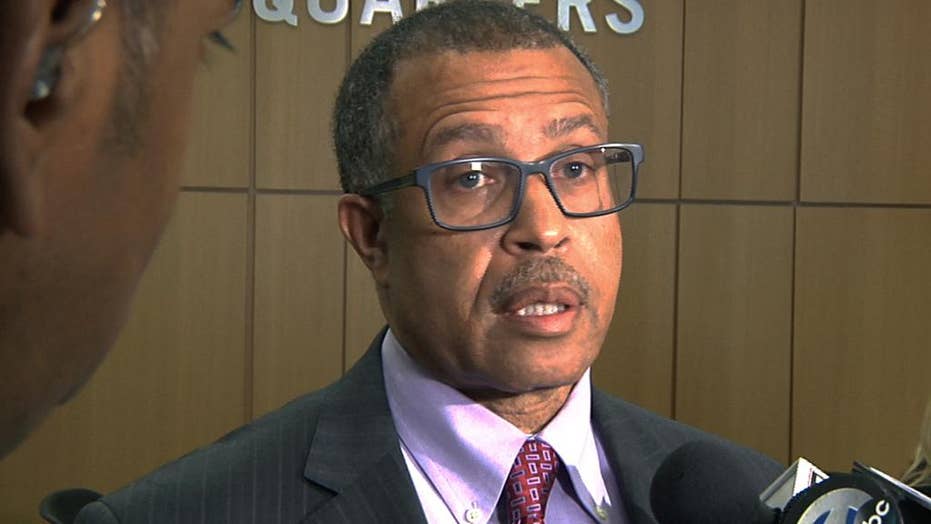 Detroit Police Chief James Craig said Friday that he was “angry” more had not been done sooner to apprehend a 28-year-old suspect who allegedly killed one Detroit police officer and wounded another Wednesday -- and may be connected to several other shootings.

Craig said he started an internal investigation to find out why the suspect, whose name has not been released, was not arrested after the first shooting, a drive-by two weeks ago at the same home on Detroit's west side where Officer Rasheen McClain was killed and Officer Phillippe Batoum-Bisse was wounded. No one was injured in the first shooting.

In between, two people were shot and wounded Sunday on the west side and two others were shot Monday on the east side. One of those victims, a 31-year-old man, died.

The drive-by, Monday’s shooting and Wednesday’s home invasion appear to revolve around the suspect’s fixation on a 16-year-old ex-girlfriend. Craig said Batoum-Bisse took the initial report against the suspect after the drive-by. The teenager also went to the police station and alleges she gave “someone in the station the name of the responsible suspect.”

An investigator sent a letter to the victim and attempted to contact the victim, “and that’s where it stopped,” said Craig. “More should have been done.”

“We’re not talking about an auto theft. We’re talking about shooting into an inhabited dwelling,” he said. “So I’m very angry. Some people are going to be held accountable.”

“If we had done an appropriate followup and taken him into custody we wouldn’t be talking about our hero who is no longer with us,” said Craig, referring to McClain. “Or the two shooting incidents on Sunday and then Monday. This happened two weeks ago. There is no excuse for a delay in investigating this type of matter.”

The suspect was released from prison on parole earlier this year.

“We could have prevented this situation,” Craig told reporters Friday. “He was on parole. If we had identified him in a drive-by shooting, we could have revoked his parole then and sought an additional warrant for shooting into an inhabited dwelling.”

Authorities believe the suspect wanted to die at the hands of the police when he invaded the home and hid in the basement, shooting at the officers as they descended the stairs. He was shot in the arm by other officers as he fled the house Wednesday.

McClain is survived by his wife, Heidi, and two stepchildren. Craig said hundreds of officers came out over the past few days to pay their respects to a “loved” member of the force.

Detroit police have requested warrants in connection with Monday’s and Wednesday’s shooting, according to the Wayne County prosecutor’s office.