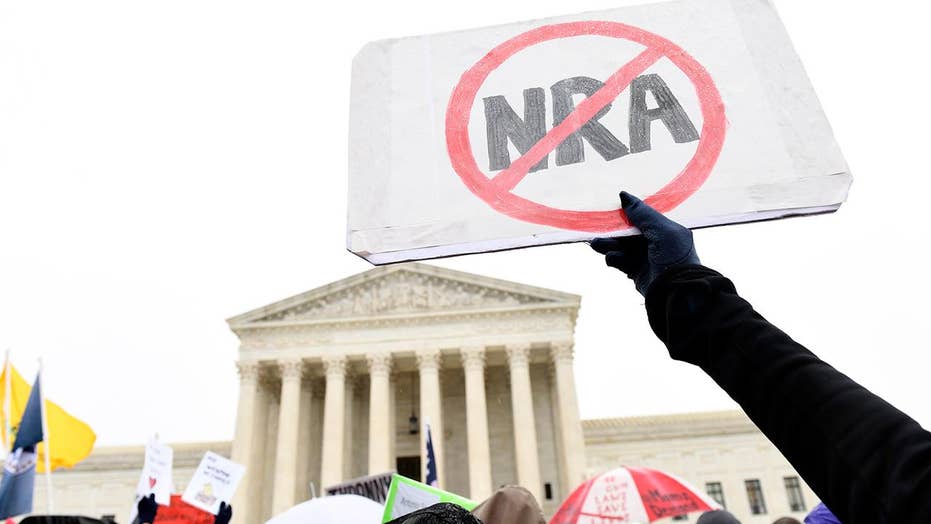 The U.S. Supreme Court, in its first gun rights case in nearly a decade, will hear arguments Monday from Second Amendment advocates challenging a New York City law that restricts licensed holders to a handful of shooting ranges within the city.

Gun rights groups are hoping the high court will extend its landmark rulings from 2008 and 2010 that enshrined the right to have a gun for self-defense at home.

The National Rifle Association (NRA) and its allies have for years tried to get the court to say more about gun rights.

The Supreme Court is set to hear arguments on a gun rights case for the first time in nearly a decade.  (AP)

The lawsuit in New York began as a challenge to the city's prohibition on carrying a licensed, locked and unloaded handgun outside the city limits, either to a shooting range or a second home.

Lower courts upheld the regulation, but the Supreme Court's decision in January to step into the case signaled a revived interest in gun rights from a court with two new Trump-appointed justices: Neil Gorsuch and Brett Kavanaugh.

Gun control advocates at both the city and state levels scrambled to find a way to remove the case from the justices' grasp. Not only did the city change its regulation to allow licensed gun owners to transport their weapons to locations outside New York's five boroughs, but the state enacted a law barring cities from imposing the challenged restrictions.

"There is no case or controversy because New York City has repealed the ordinance and the New York State Legislature has acted to make sure it remains repealed," said Jonathan Lowy, chief counsel and vice president of the gun control group Brady's Legal Alliance.

But those moves failed to get the Supreme Court to dismiss the case.

Paul Clement, who represents three New York residents and New York's NRA affiliate challenging the transportation ban, said New York City “still views firearm ownership as a privilege and not a fundamental right, and is still in the business of limiting transport and denying licenses for a host of discretionary reasons."

The city had contended that what it calls its "former rule" did not violate the Constitution. But that is unlikely to persuade the court’s conservative majority.

A decision is expected by late June.