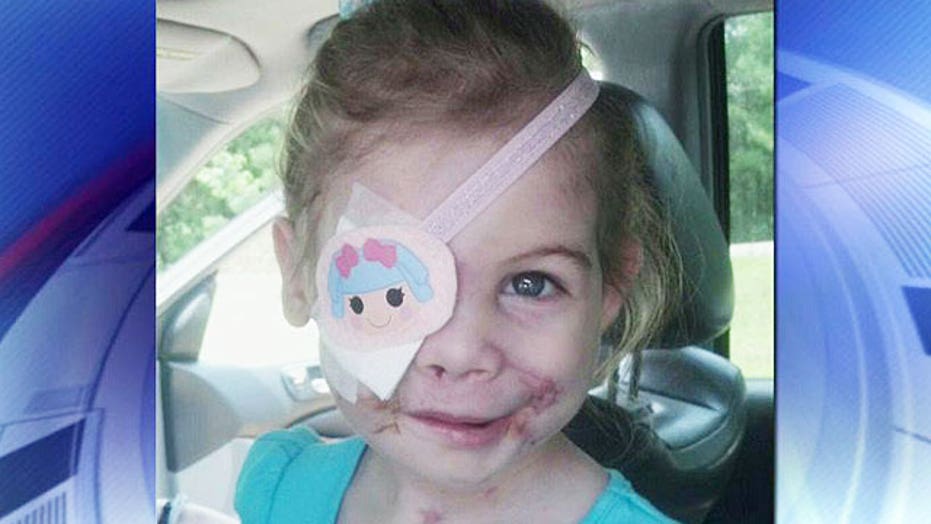 Young girl asked to leave KFC because of her scars

Little Victoria is a victim again, no matter how you look at it.

The story of the 3-year-old Mississippi girl being asked to leave a KFC because patrons were repulsed by her injuries from a pit bull attack opened hearts and wallets around the nation when it came to light earlier this month. But the tear-jerker tale has been branded a hoax by a local newspaper, and now Victoria, who lost an eye and endured several painful operations after the horrific attack in April, is either a victim of her own family or a growing army of doubters.

Citing an unnamed source, the Laurel Leader-Call newspaper cast doubt on the story that Victoria ever endured the shameful treatment that generated more than $135,000 in donations and the pledge of a Las Vegas plastic surgeon to offer to help the girl.

"It just didn't happen," the newspaper quoted its source in a story titled, “Kentucky Fried Hoax.”

Louisville-based KFC said two separate investigations found no evidence substantiating the incident, but spokesman Rick Maynard said the company intends to follow through on its pledge of $30,000 toward Victoria's medical bills.

But Victoria's family denied the charge Tuesday on a Facebook page called Victoria’s Victories that is following the girl’s recovery from the mauling.

“I promise it's not a hoax,” says the Facebook page administered by Victoria’s aunt, Teri Rials Bates. “I never thought any of this would blow up the way it has. The article circling the web calling this a hoax is untrue. The article itself says the investigation is not complete. It is not over until KFC releases a statement. The media outlet running this story is not connected with KFC. The family has not asked for anything, a attorney is handling all the media publicity for the family pro bono. Please do not believe untrue media. I have personally watched this family go without to provide for Victoria. They have not and would not do anything to hurt Victoria in any way."

Reached Tuesday by FoxNews.com at her home in Harrisville, Miss., Bates said she had seen the newspaper's story. She declined comment and referred a reporter to an attorney in Jackson, Miss., who is helping the family and Victoria.

"It is deeply disappointing that other parties have taken opportunity to attack Victoria through social and news media outlets," attorney Bill Kellum said in a statement. "Victoria is an innocent child with very real physical and emotional scars. The focus of her family and ours has always been, and will always be on Victoria and making her whole again."

Victoria’s grandmother Kelly Mullins has said she took Victoria to the hospital for an appointment on May 15 and on their way home they stopped at a KFC near the hospital. She said after sitting down with their order they were asked to leave by an employee who told them the girl’s face was “disrupting our customers.”

In April, three pit bulls attacked Victoria at her grandfather’s home. Victoria underwent three surgeries to repair a broken nose and cheekbones, a shattered jaw and a damaged right eye socket. The right side of her face was paralyzed and she lost her right eye. The grandfather and his girlfriend were arrested on child endangerment charges.

Through the Facebook page, Victoria's family has collected more than $135,000 in donations on her behalf from nearly 3,000 people. A Las Vegas plastic surgeon has offered to reconstruct the girl's face for free.

The Leader-Call quoted the source as saying that surveillance video from May 15 at two KFCs near the hospital did not record anyone matching the girl's description or Mullins.

The source also told the paper that a check of receipts from that day at the two restaurants failed to turn up what Mullins ordered for Victoria: mashed potatoes and sweet tea.

The newspaper's source appears to be someone with ties to the KFCs. “We have never, ever run off anyone, and we have seen some really sick people come to the restaurant from the hospital,” the source told the newspaper. “We’ve had people come in who were shot in the face. We’ve had them with tubes and wire sticking out. We never have asked anyone to leave.”