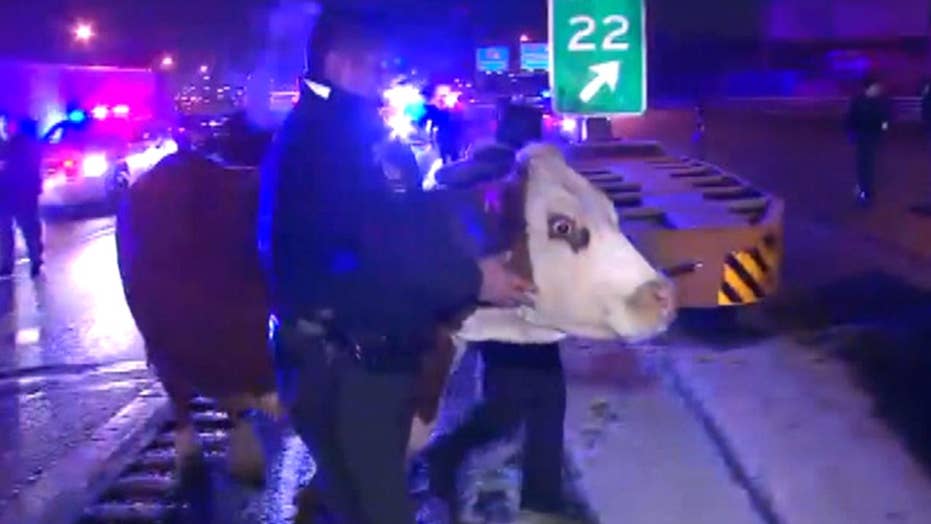 Cow that escaped nativity scene corralled by cops on highway

Stormy the cow was on the loose in Philadelphia. Not once – but twice. And the rogue cow caused quite the traffic scene when he hoofed it across a busy highway.

The bovine made its first escape from the Old First Reformed Church of Christ in the city's Old City neighborhood around 3 a.m. Thursday and wandered onto Interstate 95. It had to be corralled by police with their cruisers, according to FOX 29.

Hours later, the cow made a second break for it. Instead of heading for a highway again, Stormy took to the city streets and eventually was found on the fourth floor of a parking garage.

A cow from a living nativity scene at a church caused a commotion across some of the busiest parts of Philadelphia. (FOX 29)

Stormy was eventually led back to the church and given a full breakfast to keep her occupied, according to FOX 29.

The rogue cow made her first escape from the Old First Reformed Church of Christ in the city's Old City neighborhood around 3 a.m. Thursday and wandered onto Interstate 95. (FOX 29)

Philadelphia Police said they're investigating the how the bovine broke free. No injuries were reported by officers involved in the capture or the cow.

Police also joked on the unusual situation, writing on Twitter "If you're in the area of 4th and Market, beware of traffic delays. A cow is loose. Again. No, we can't believe we're tweeting this either."

The departmental added, "You know, you start your day saying "well, being a cop is a tough job, but at least I won't have to catch a cow today." But, then wouldn't you know it? You're wrangling a bovine. Then you say, "Well, at least I'll never have to do that again...."

A pastor at the church told FOX 29 they believe someone may have tampered with the latch, allowing the cow to push the gate open. The church’s living nativity scene has been a tradition in the neighborhood for decades.

After the incident, Stormy was eventually loaded on a truck and sent back to a farm. She has since been replaced by another bovine named Ginger, a smaller cow, according to FOX 29.