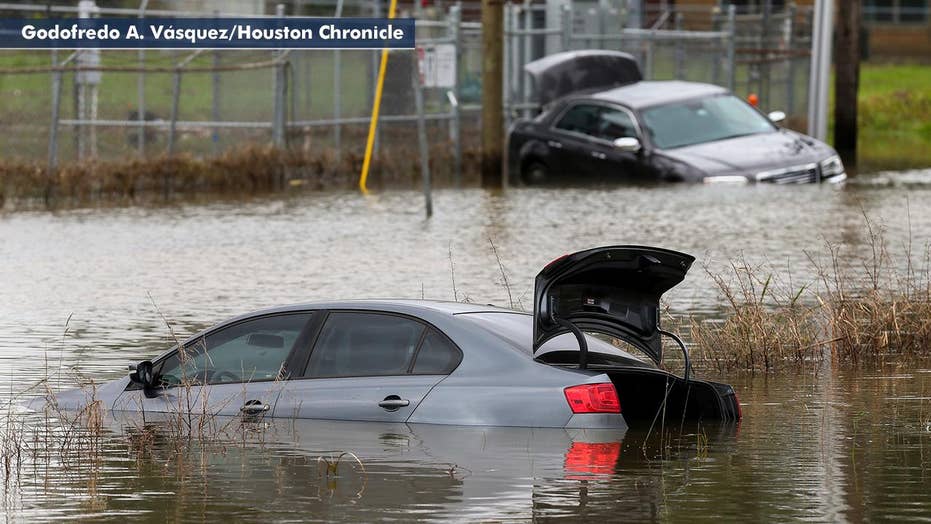 PINE BLUFF, Ark. – Several people were injured when a tornado damaged two apartment complexes in Arkansas, part of a powerful line of thunderstorms that was dumping more rain Thursday on waterlogged areas throughout the nation's midsection.

The severe weather moved eastward after forcing people from their homes in Kansas, soaking Houston once again , and straining levees along the surging Mississippi River on Wednesday.

Flooding has caused billions of dollars of damage to farmland, homes and businesses across the Midwest, with some rivers above flood stage for more than six weeks now.

The National Weather Service issued flood warnings as more than 5 inches (127 millimeters) of rain fell in parts of Mississippi. The downpours swelled streams and made driving difficult.

Fear of flooding in the Houston area grew throughout Thursday evening as steady downpours overwhelmed some roadside storm drains.

According to the Harris County Flood Warning System website , almost 5 inches (127 millimeters) of rain had fallen in the first 90 minutes of the storm Thursday evening at the Barker and Addicks flood-control dams on Houston's western outskirts.

Some high water disrupted traffic in some intersections in the western Houston area, and fire-rescue crews were making a handful of high-water rescues. But with the exception of a couple of small creeks, most streams were still within their banks. No injuries or flooded buildings were immediately reported.

Trees were down in north Alabama after the storm system moved through, prompting multiple tornado warnings. No injuries were reported but officials said several farm buildings were damaged.

In Arkansas, authorities said about 150 people were displaced Wednesday after the storm hit apartment buildings and ripped off a roof in Pine Bluff, about 40 miles (64 kilometers) southeast of Little Rock.

Pine Bluff Police Chief Kelvin Sergeant said four people were hurt, according to the Arkansas Democrat-Gazette. "One of those is probably going to be pretty severe," he said.

The weather service confirmed Thursday that the damage was caused by a small tornado that touched down for less than a minute Wednesday night. Meteorologist Thomas Jones said two apartment complexes were damaged.

Jones said the twister was about 100 yards (91 meters) wide and traveled for only about a quarter of a mile, but still managed to damage the brick facing and roof of the apartments. He said at least two walls caved in.

Resident Carla Jackson told the Arkansas Democrat-Gazette that she heard a loud boom and that the storm moved in quickly.

In Kansas, flooding waterways forced evacuations and school closures Wednesday. Problems continued Thursday, when a 19-year-old had to be rescued from her car's roof near Emporia. And the Kansas Turnpike remained closed near the Oklahoma border.

The weather service predicted the Missouri River would crest Thursday in St. Joseph, Missouri, at a level that causes parkland and a residential area to flood.

In northwestern Missouri's Holt County, emergency management director Tom Bullock said a few people who had moved back home after March's flooding busted levees were forced out again late Wednesday by rising water. His own home is now unreachable.

Wind-driven water caused more flooding in southeastern Michigan along western Lake Erie following recent rainfall that contributed to high water levels in the Great Lakes. Firefighters in Monroe County's Berlin Township used a boat to reach those stranded at homes by high water near Lake Erie. In nearby Frenchtown Township, pumps were used to clear roadways.

More severe weather is possible through the weekend.