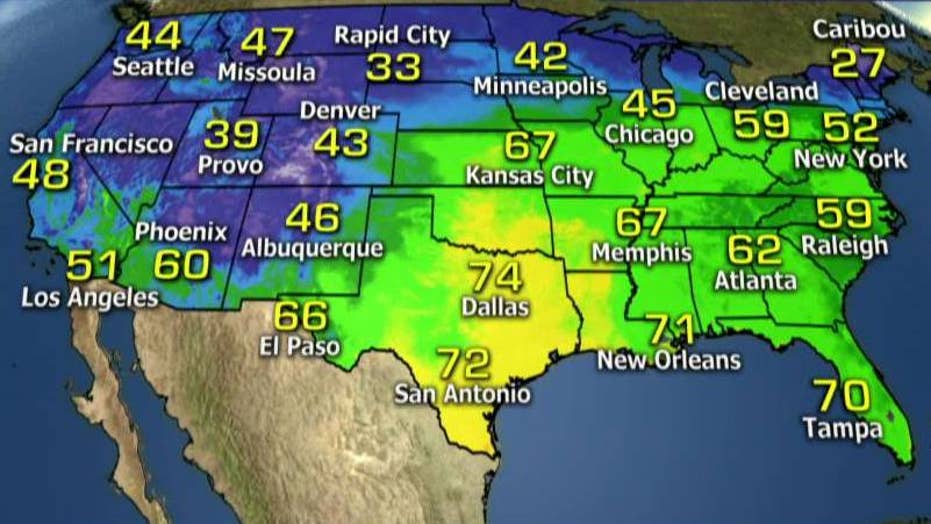 OKLAHOMA CITY – Thunderstorms bearing hail as big as grapefruit and winds approaching hurricane strength lashed portions of the Great Plains on Tuesday, but arrived without the grand tornadoes that many had worried about for days.

A rope tornado brushed fields south of Wichita, Kansas, and another small twister touched down in southwestern Indiana. As the sun went down on the western prairie, the Storm Prediction Center had received reports of bad weather from Texas to Nebraska to West Virginia, but none of them deadly.

"It's never straightforward when you're sitting here talking about (predicting) large tornadoes," meteorologist Matt Mosier said as the forecast was taking shape.

But it's not like the weather wasn't bad or scary. It was both.

Hail 4 inches in diameter fell in northern Kansas, northwest of Marysville, and winds hit 70 mph in Missouri and Texas while storms went through. Residents of Topeka, Kansas, eyed the sky nervously during rush hour after forecasters warned that a supercell thunderstorm could produce a tornado at any moment.

Storm clouds appear over a home near Meers, Okla., Tuesday, April 26, 2016. Strong thunderstorms capable of dropping grapefruit-sized hail and producing a few intense tornadoes popped up across the central U.S. on Tuesday after forecasters warned that millions of people faced a significant danger. (Robert MacDonald via AP) MANDATORY CREDIT

As night fell, small twisters accompanied a line of thunderstorms as it rolled into Oklahoma City. Telltale power flashes from failing transformers pierced the twilight as another neighborhood lost power.

Forecasters posted a tornado watch for Oklahoma and Texas until midnight, saying the atmosphere could still be unsettled enough for twisters to develop.

"This is a particularly dangerous situation," the Storm Prediction Center alerted in red type in an afternoon advisory. It uses such language on only about 7 percent of its tornado watches. Forecasters had predicted a 90 percent chance of tornadoes and said 80 percent could have winds above 111 mph in much of Oklahoma and northern Texas.

In the days ahead of the storm, forecasters had said a severe weather outbreak was possible Tuesday, perhaps including tornadoes that could stay on the ground for miles. Bad weather is expected again Wednesday in Arkansas and Missouri, then later in the week in Oklahoma, Texas and Louisiana.

Ahead of Tuesday's storms, businesses set out to protect their goods ahead of storms while school districts sent children home early, hoping to keep them safe.

George Eischen, 51, spent Tuesday morning moving vehicles off the lot at his Chevrolet dealership in the small town of Fairview, about 100 miles northwest of Oklahoma City. Eischen said he was lining the new vehicles "bumper to bumper" in the shop and even the floor of the lobby to protect them from the hail.

"We've never been hit by a tornado here in town, amazingly," Eischen said. "But yeah, we've had hail. And that's the real enemy of the car dealer."

Workers scrambled to protect planes at the Spirit of St. Louis Airport in Chesterfield, Missouri, when the winds picked up and the sky turned green.

"And I mean green green," aviation director John Bales said. "It was pretty violent but luckily we didn't have any substantial damage. We saw it coming and we were able to get most of the airplanes into hangars, so we didn't have too much hail damage."

Bill Schwindamann, the emergency management chief for Marshall County, Kansas, said large hail damaged roofs and broke car windows near the town of Bremen, near Marysville. The hail started small about 5 p.m. but grew to as much as 4 inches in diameter, or about the size of a grapefruit.

Mid-Del Public Schools, in the Oklahoma City suburb of Midwest City, said in a statement that the safety of students and staff is a priority, noting that it reworked its tornado safety plan three years ago after a twister killed seven schoolchildren in the neighboring suburb of Moore.