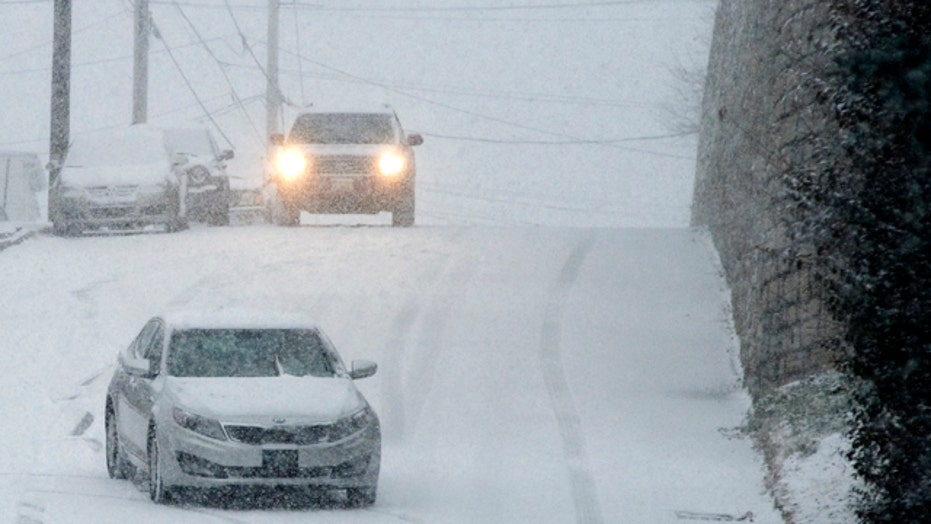 A powerful, slow-moving storm that has affected much of the U.S. brought snow and bitter cold to the Northeast Monday, snarling traffic, prompting another 1,650 U.S. flight cancellations and leaving tens of thousands of people without power.

The storm covered parts of North Texas in ice over the weekend and then moved East. Below-zero temperatures crowned the top of the U.S. from Idaho to Minnesota, where many roads still had an inch-thick plate of ice, polished smooth by traffic and impervious to ice-melting chemicals.

Some of the most difficult conditions were in North Texas. More than 22,000 Dallas-area homes and businesses were still without power, according to electric utility Oncor. That was down from 270,000 on Friday. Dallas students got a snow day.

More than half of the nation's flight cancellations on Monday were at Dallas-Fort Worth International Airport, dominated by American Airlines. About 650 travelers were stranded there Sunday night.

Nationally, there have been more than 6,100 flight cancellations since Saturday, according to FlightStats.com, including more than 2,800 by American or its American Eagle regional airline. American emerged from bankruptcy protection and merged with US Airways on Monday.

From 1 inch to at least 5 inches of snow were forecast for Monday night into Tuesday for an area stretching from Virginia into New York, the National Weather Service said.

Dangerously cold temperatures and wind chills were forecast for the western half of the U.S., the weather service said, with temperatures about 10 to 30 degrees below average from the Rockies to the Great Lakes and lower Mississippi Valley, Reuters reported.

In Washington, cab driver Mahdi Abdi said he had been driving since around midnight and the main roads were clear. But side streets were a different story.

What was forecast in the Philadelphia area to be a tame storm with about an inch of snow gradually changing over to rain mushroomed into a full-blown snowstorm. A foot of snow was reported in Newark, Del. Philadelphia International Airport received 8.6 inches, more than it had all of last year. Other areas received far less: a little over an inch was reported in Pennsylvania's Lehigh Valley, which usually is hit harder than downtown Philadelphia.

Sunday's snow fell so heavily in Philadelphia that yard markers at Lincoln Financial Field -- where the Eagles beat the Detroit Lions -- were completely obscured. It was almost as bad in Pittsburgh, where the snow intensified after the opening kickoff.

Philadelphia fan Dave Hamilton, of Ivyland, layered up for the game in Eagles gear.

"Twenty-seven years I've been a season-ticket holder, I've never seen snow at the game like this," he said. "It just kept coming down."

Heavy snow in the Philadelphia area led to a number of accidents, including a fatal crash on the Pennsylvania Turnpike that spawned fender-benders involving 50 cars, stranding some motorists for up to seven hours. More than two dozen vehicles were involved in another series of crashes on nearby Interstate 78.

Paul Jones, 24, a youth hockey coach from Warminster in the Philadelphia suburbs, was on his way to a game in Lancaster when he got stuck -- along with his fiancee, another coach and three players -- in a major backup on the turnpike.

The roadway was "snow-covered, slick," Jones said by phone from the car, where he was a passenger and had been at a standstill for more than an hour.

"People are in and out" of their vehicles, he said. "Kids are having a snowball fight on the side of the road, making snow angels, people are walking their dogs."

In Maryland, a chain-reaction accident on Interstate 81 in Washington County involving more than 20 vehicles delayed snow removal efforts for hours. The highway was closed for more than three hours after a tractor-trailer ran into the median to avoid cars that had spun out. It was hit by another tractor-trailer that overturned and spilled its load. Several other tractor-trailers ran off the road and jackknifed as their drivers tried to avoid the crash.

But the nasty weather wasn't limited to the East Coast. Nebraska and Iowa saw snow; multiple weather-related crashes were reported in Wisconsin, including two that were fatal; and thousands of customers lost power in Mississippi because of sleet and freezing rain.

A snowstorm that hit along the Utah-Arizona border left hundreds of travelers stranded on Interstate 15 overnight into Sunday. The Arizona Highway Patrol said passengers in about 300 vehicles became stranded after up to 10 inches of snow and slick road conditions prompted the closure of part of the highway. There were no immediate reports of serious injuries.