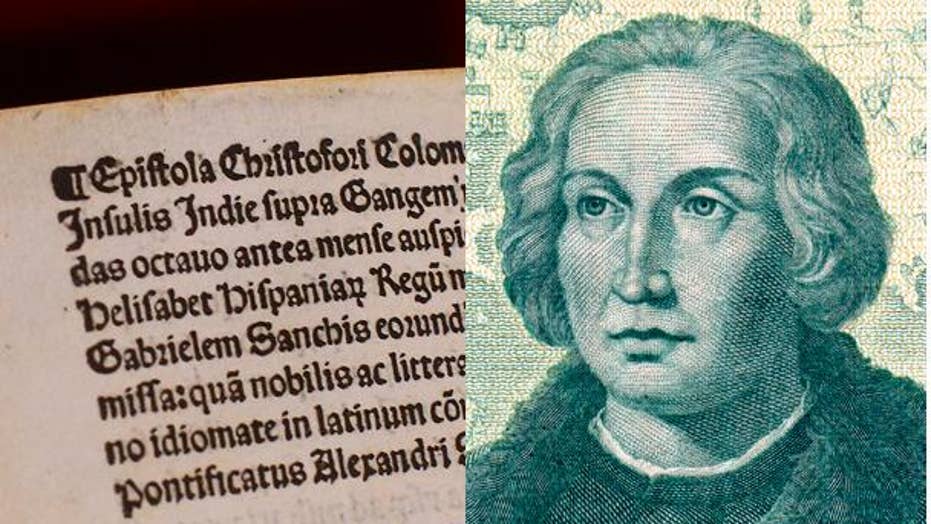 The letter that Christopher Columbus wrote to the Vatican after his discovery of the ‘New World' is returned after being stolen.

Federal agents have recovered a centuries-old copy of a letter penned by Christopher Columbus to Spain's King Ferdinand after the famed explorer arrived in the Americas.

The letter is one a few dozen copies of a letter written in Spanish by Columbus in 1493, the Justice Department said.

The U.S. Attorney’s Office in Delaware and Homeland Security investigators, who specialize in the recovery of stolen rare books and historic artifacts, announced the find Wednesday. The letter is valued at $1.3 million and had been missing for more than 40 years since it was stolen from a library in Venice, Italy.

Federal authorities announced the finding of a copy of a letter written by Christopher Columbus in 1493 detailing his discoveries in the Americas.  (Department of Justice )

It was the fourth such return of a copy after authorities were tipped off by a rare books expert who determined that several authentic copies of the Columbus letter had been stolen from libraries across Europe without library officials’ knowledge. Unlike other stolen copies of the letter, the newest one was not replaced with a forgery.

The letter, titled "Columbus Letter Plannck I," details Columbus' discoveries in the Americas. It was printed by Roman printer Stephanus Plannck. Plannck also printed another edition of the letter for both Ferdinand and Queen Isabella and published it to spread the news of his discoveries.

Investigators said the newest find is the most rare of the four copies. It was found in the hands of an unidentified private collector and ordered returned to the Biblioteca Nazionale Marciana in Venice, authorities said.

American and Italian authorities determined the collector was "acting in good faith" when he bought the letter from a book dealer in the U.S. in 2003. The letter hadn't been reported stolen at the time of the purchase.

Investigators said they have recovered a letter dating back to 1493 written by Christopher Columbus. The letter had been stolen from a library in Italy.  (Department of Justice )

The Venetian library acquired a copy of Plannck’s first edition around 1875, and investigators think it was stolen from the library more than 100 years later, in the 1980s, the U.S. Attorney’s Office said. Rare book expert Paul Needham was asked to examine it before it was reported stolen, about 15 years ago, The News-Journal in Delaware reported.

He contacted the Justice Department after he grew suspicious of the letter after attending a conference in Venice in 2018 and thinking it could belong to a library there, according to the paper.

In June 2018, the United States returned to the Vatican Library another rare copy of a letter written by Columbus. In that case, the stolen artifact had been replaced with a forgery.