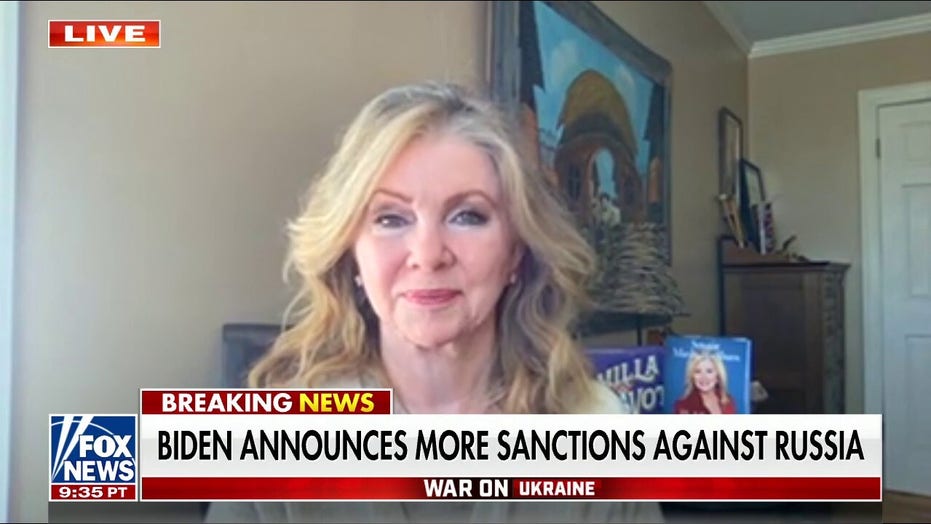 Outraged motorists are sticking it to Joe Biden at the gas pumps.

Decals of a finger-pointing President Biden, with the words "I did that!" in big, bold print, have been appearing on fuel pumps across the country — including New York City — as gasoline prices skyrocket.

"I just know everything he’s been doing since he took office has been going downhill. Bring Trump back," said Harold Frost, 29, of the Upper West Side. "My car has been parked the whole week because of this. I took the train, but it’s dangerous now on the train. You gotta be careful."

A sticker of President Joe Biden is placed on a gas pump at an Exxon Station on March 9, 2022 in Lakewood, Colorado. (RJ Sangosti/MediaNews Group/The Denver Post via Getty Images)

The Post found the stickers — which sell in packs of 100 for $8 on Amazon — on a pump at the Speedway on Bruckner Boulevard in Mott Haven, where an attendant tried to peel it off. Three stickers adorned a Shell pump in Harlem on Broadway, where The Post interviewed drivers filling their tanks.

"I don’t go for the Democrats. They make it seem like they got the backs of minority people, but in reality, they’re just in it for themselves," said Vincent Williams, 29, a black Harlem resident who said he could only afford to put $15 in his tank — which these days barely buys three gallons. "The rise in gas prices is B.S."

A satirical protest sticker critical of American President Joe Biden, with text reading I Did That, has been placed on a gasoline pump in Lafayette, California. (Photo by Smith Collection/Gado/Getty Images)

One gallon of regular unleaded gas is averaging $4.78 in Manhattan and $4.32 nationally as of Saturday, according to the American Auto Association.

BIDEN CAN ONLY BLAME HIMSELF FOR HIGH GAS PRICES

Mayor Melendez, 20, of Brooklyn, said he’ll have to make budget cuts elsewhere to fill up his Toyota RAV4

A satirical sticker of US President Joe Biden is placed on a gas pump at a Turkey Hill station. AAA reported the national average  price for a gallon of gas in the United States was a record high of $4.173. (Paul Weaver/SOPA Images/LightRocket via Getty Images)

Even though she was filling up her work car on NBC Sports’ dime, Kayle Washington, a 29-year-old production runner from New Haven, Conn., got a little nervous when the cost nearly reached $120 for 24 gallons of regular.

"I just got to keep reminding myself that, you know, Russia’s bad," she said.

The stickers first started appearing last year, and have gained in popularity as gas prices continue to surge. The Biden administration banned Russian oil imports in response to the country’s war on Ukraine, but some critics say he was already sabotaging gas prices with his energy policies.

Gas station managers are not fans of the stickers.

"Put it on your car, put it on your house. Don’t vandalize private property," one Alabama attendant told ABC.

Javier Estrada Ovalles, who sells his own Biden stickers through his company, Automotive Anarchy, told Slate that he’s benefiting from the oil shock, filling nearly 80 orders a day for the cheeky political statements.

"Me personally, I’m not either left or right or Democrat or Republican, nothing like that," he said. "It’s just whatever sells is pretty much what’s gonna go on the shelf."