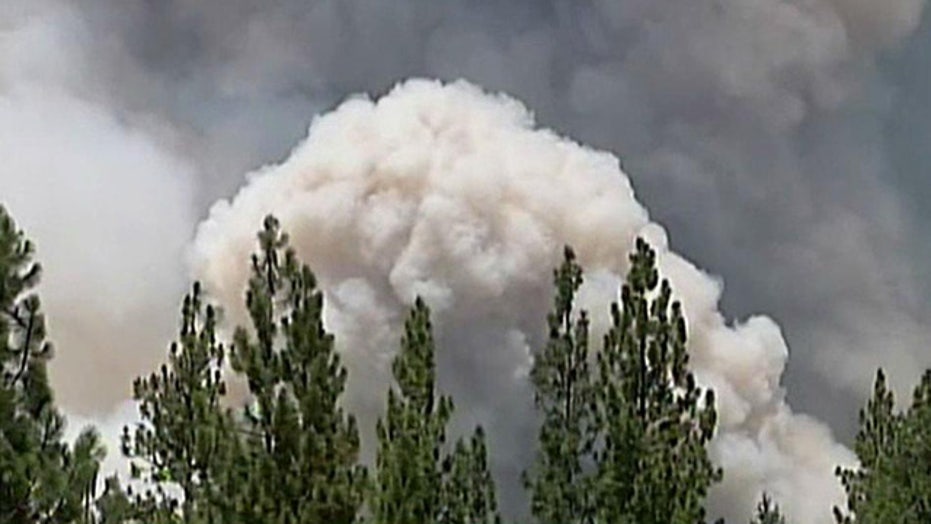 Yosemite may miss out on tropical moisture

A raging wildfire along the northwest edge of Yosemite National Park is gaining strength Saturday afternoon as firefighters scramble to protect nearby mountain communities.

The fire held steady overnight at nearly 200 square miles, but a spokesman for the California Department of Forestry and Fire Protection says firefighters didn't get their usual reprieve from cooler early morning temperatures Saturday.

The Rim Fire started in a remote canyon of the Stanislaus National Forest a week ago and is just 5 percent contained with more than 2,600 firefighters on the lines. A half dozen aircraft are being used to battle the blaze.

The Yosemite Valley, the part of the park frequented by tourists and known around the world for such iconic sights as the Half Dome and El Capitan rock formations and Yosemite falls, remained open, clear of smoke and free from other signs of the fire that remained about 20 miles away.

But the blaze was reverberating around the region. It brought a governor's declaration of emergency late Friday for San Francisco 150 miles away because of the threat the fire posed to utility transmission to the city, and caused smoke warnings and event cancellations in Nevada as smoke blew over the Sierra Nevada and across state lines.

And the fire had established at least a foothold in Yosemite, with at least 17 of its 196 square miles burning inside the park's broad borders, in a remote area near Lake Eleanor where backpackers seek summer solace.

Park spokeswoman Kari Cobb said that the park had stopped issuing backcountry permits to backpackers and had warned those who already had them to stay out of the area.

She emphasized that the skies over Yosemite Valley were "crystal clear," however.

"Right now there are no closures, and no visitor services are being affected in the park," Cobb said. "We just have to take one day at a time."

The blaze did, however, pose a threat to the lines and stations that pipe power to the city of San Francisco, so Gov. Jerry Brown, who had declared an emergency for the fire area earlier in the week, made the unusual move of doing the same for the city across the state.

San Francisco gets 85 percent of its water from the Yosemite-area Hetch Hetchy reservoir that is about 4 miles from the fire, though that had yet to be affected. But it was forced to shut down two of its three hydroelectric power stations in the area.

The city has so far been able to buy power on the open market and use existing supplies, but further disruptions or damage could have an effect, according to city power officials and the governor's statement.

The declaration frees funding and resources to help the city and makes it eligible for more federal funds to help with power shortages and outages or water problems.

The fire continued to grow in several directions, although "most of the fire activity is pushing to the east right into Yosemite," said Daniel Berlant, spokesman for the California Department of Forestry and Fire Protection.

The fire was threatening about 5,500 residences, according to the U.S. Forest Service. The blaze has destroyed four homes and 12 outbuildings in several different areas.

It closed a 4-mile stretch of State Route 120, one of three entrances into Yosemite on the west side. Two other western routes and an eastern route were open.

A mandatory evacuation order remained in effect for part of Pine Mountain Lake, a summer gated community a few miles from the fire.

"It feels a little bit like a war zone, with helicopters flying overhead, bombers dropping retardant and 10 engine companies stationed on our street," said Ken Codeglia, a retired Pine Mountain Lake resident who decided to stay to protect his house with his own hoses and fire retardant system. "But if the fire gets very hot and firefighters evacuate, I will run with them."

Officials previously advised voluntary evacuations of more than a thousand other homes, several organized camps and at least two campgrounds in the area outside the park's boundary.

"We usually book out six months solid with no vacancies and turn away 30-40 people a night. That's all changed," Edwards said. "All we're getting for the next three weeks is cancellations. It's a huge impact on the community in terms of revenue dollars."

The fire is raging in the same region where a 1987 blaze killed a firefighter, burned hundreds of thousands of acres and forced several thousand people out of their homes.