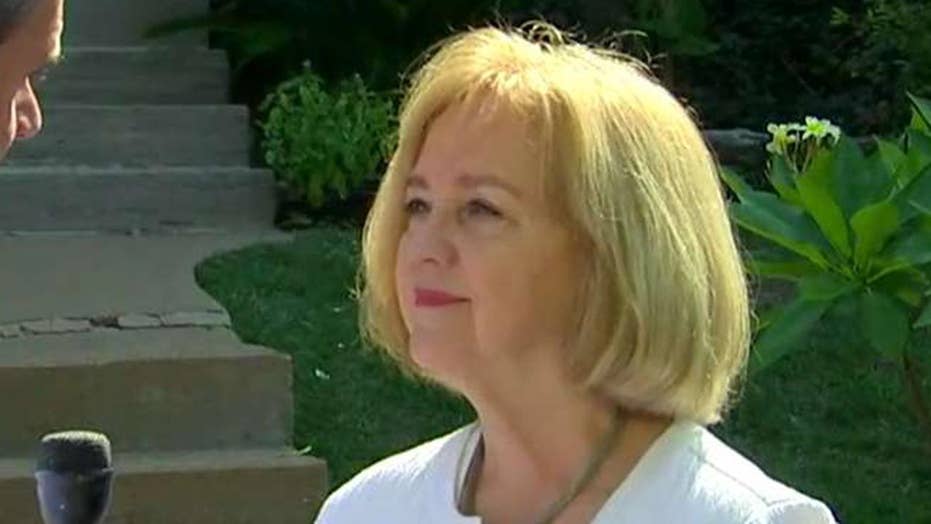 St. Louis mayor: Our goal is to protect rights of protesters

Protests in St. Louis over the acquittal of a white police officer in the shooting death of a black man turned violent late Friday as demonstrators clashed with riot-gear-clad cops and surrounded the home of the city’s mayor.

Members of a crowd of about 1,000 broke at least two windows at the home of Mayor Lyda Krewson and threw red paint at the brick house before riot police moved in to disperse the crowd with tear gas, the St. Louis Post-Dispatch reported.

There was no indication that Krewson was inside the home at the time, the newspaper reported.

Police in bulletproof vests and helmets closed in and demanded protesters get off the lawn and out of the street in front of the house. Officers used tear gas to move the crowd out of the area and the protests were all but dispersed within the next two hours.

More than 20 arrests were made by early evening, and some protesters were pepper-sprayed during confrontations with authorities. St. Louis police reported that 10 officers had suffered injuries by the end of the night, including a broken jaw and dislocated shoulder, and some journalists reported being the target of threats from demonstrators.

A freelance Associated Press videographer said a protester threw his camera to the ground and damaged it, and he was later threatened with a beating if he didn't put another camera away. A KTVI reporter said water bottles were thrown at him after a protester taunted him, drawing a crowd.

St. Louis police said two officers were taken to a hospital with injuries suffered from thrown bricks in the Central West End district of St. Louis.

One officer had a serious injury from a brick thrown at Kingshighway and Waterman, then a second was headed to the hospital as well, the city's police department said. No other information was immediately released.

The protests began Friday morning after a white former St. Louis officer was found not guilty of first-degree murder in the shooting death of a black suspect.

That white officer, former St. Louis police Officer Jason Stockley, said Friday that he understands how a video of him fatally shooting Anthony Lamar Smith after a car chase in 2011 looks bad to investigators and the public. But he said the optics have to be separated from the facts and he did nothing wrong.

Stockley was found not guilty of first-degree murder in the death of Smith, who was black. The ruling Friday sparked hundreds of people to protest in St. Louis.

Stockley told the St. Louis Post-Dispatch that the burden of having to kill someone never totally lifts. The former officer said he was concerned for first-responders and protesters and doesn't want to see anyone hurt over the ruling.

He said he "can feel for" and "understand" what Smith's family is facing, but that he's not to blame.

Stockley was charged with first-degree murder after he shot Anthony Lamar Smith five times in 2011 following a high-speed chase. Stockley said he saw Smith holding a gun, and felt as though he was in danger.

A gun found in Smith’s car only had Stockley’s DNA on it, prompting the prosecution to allege it was planted.

During the trial, Assistant Circuit Attorney Robert Steele said that police dashcam video showed Stockley saying he was "going to kill this (expletive), don't you know it," before shooting Smith five times.

Stockley could have been sentenced to up to life in prison without parole. He left the St. Louis police force in 2013.

The protests sparked concerned for the city of St. Louis because violent riots broke out in nearby Ferguson in 2014 after Michael Brown, an unarmed black teenager, was fatally shot by a white cop. That officer was never charged and eventually resigned.

St. Louis police said on Twitter that 13 people had been arrested following Stockley's acquittal, including one Friday morning.

St. Louis activists warned of civil disobedience if Stockley were to be acquitted before the verdict was announced.