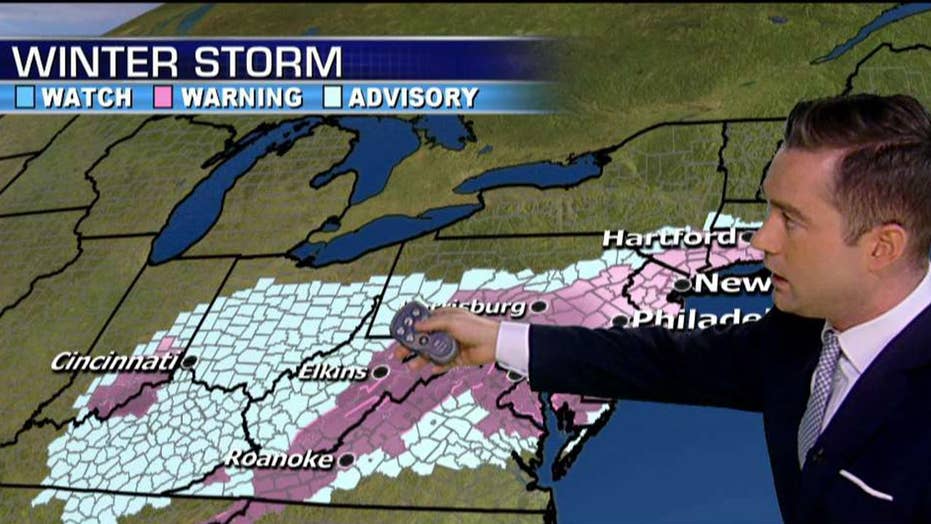 Spring greets us with another nor'easter?

It may be the first day of spring, but winter isn't leaving without one more wallop across the Northeast.

In the fourth nor’easter to smack the region in three weeks, the National Weather Service predicts upwards of 18 inches of snow could fall across the region.

The bulk of the powerful storm is expected to hit New Jersey, Maryland, Delaware and parts of eastern Pennsylvania before landing off Nantucket early Thursday.

In New York City, forecasters expect anywhere between a foot to 16 inches of snow. In New England, heavy snow is expected with a total accumulation of more than 14 inches.

“Snow will fall across the Central Appalachians and Mid-Atlantic today,” Fox News’ Janice Dean reported Tuesday. “Late tonight through Thursday morning, another Nor’easter will develop off the East Coast.”

She said Washington, D.C. may see its highest accumulation of snow in years, with forecasters predicting anywhere between 7 to 10 inches.

Winter storm warnings were extended from eastern Massachusetts to the Smokey Mountains of Tennessee and North Carolina.

“Travel will be very difficult to impossible, including during the evening commute on Wednesday, the National Weather Service said. “Expect significant reductions in visibility at times.”

Sleet and freezing rain are expected by Tuesday afternoon, the first day of spring. The mixed precipitation should turn to all snow by late Tuesday and continue through most of Wednesday.

Widespread power outages are possible, especially Wednesday, with gusts blowing up to 35 mph.

The jet stream, the upper level river of air that guides weather, is stuck in a plunging pattern that brings plenty of moisture from the south up the East Coast, said Brian Hurley, senior forecaster at the National Weather Service's Weather Prediction Center.

Four nor'easters in three weeks is highly unusual, but it happens when a pattern locks in. And that's happened this year, Hurley said.

Severe storms that spawned tornadoes damaged homes and downed trees as they moved across the Southeast on Monday night. (Johnny Tribble via AP)

The area around Jacksonville State University was among the hardest hit as the storms swept across the South.

Part of the roof was ripped off the nursing school and Pete Mathews Coliseum, a 3,500-seat basketball arena. Pieces of lumber and bent metal covered the ground along with insulation that looked like yellow cotton candy.