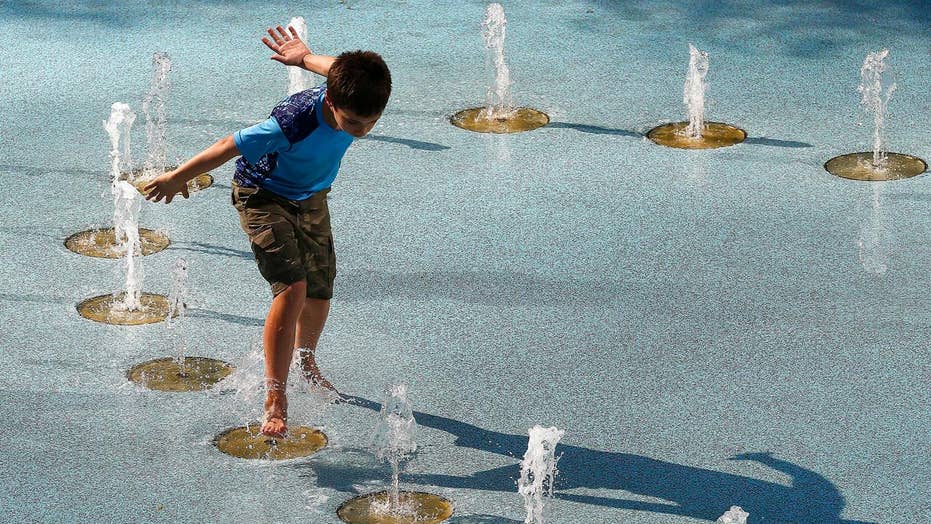 The Valley of the Sun lived up to its name Tuesday, hitting a record 118 degrees just hours before the first day of summer.

"It's really important, especially how hot it is here in Arizona, that people continue to drink water and stay hydrated,” said Becky Hulett, a Phoenix recreation supervisor.

“Now people are like desperate – they do and pay anything to get them fixed,” said Alan Schwandt of Alan’s Air.

A woman walks along a row of misters Monday, June 19, 2017 in Tempe, Ariz. The forecast calls for a high of 118 on Monday and 120 on Tuesday in Phoenix. (AP Photo/Matt York) (Copyright 2017 The Associated Press. All rights reserved.)

"It's physically impossible for those individuals to carry enough water,” said Border Patrol Agent Vicente Paco, patrolling near the Mexican border in the Sonora Desert south of Tucson. "It should not be a death sentence to come across the border illegally, and yet smugglers put immigrants in those situations."

A man stands under a misting machine, Monday, June 19, 2017 in Tempe, Ariz. The forecast calls for a high of 118 on Monday and 120 on Tuesday in Phoenix. (AP Photo/Matt York) (Copyright 2017 The Associated Press. All rights reserved.)

Several utilities warned of blackouts, Phoenix aid workers checked on the vulnerable, fire crews battled wildfires in Utah and California, while in Arizona it was literally too hot to fly.

"The plane can literally not take off, if that's the legitimate reason, then of course, we don't want to be on it,” said passenger Mary Booth.

"Each make and model aircraft have performance criteria and if any variable exceeds that, it essentially grounds the airplane,” said Marc O'Brien, aviation program chair at Arizona State University.

While it’s true you can fry an egg and bake cookies in this heat, where a car’s interior can reach 158 degrees in 30 minutes, officials biggest concern is health.

People cross Las Vegas Boulevard as the sun beats down, Tuesday, June 20, 2017, in Las Vegas. The first day of summer is forecast to bring some of the worst heat the southwestern U.S. has seen in years. (AP Photo/John Locher) (Copyright 2017 The Associated Press. All rights reserved.)

“We’re looking for people who may still be out in the sun or unable to find a cool place,” said Amy McMullen of Phoenix Allies for Community Health.

Last year, about 2,000 Arizonians visited emergency rooms for heat exhaustion and 130 died in heat-related fatalities. In about half the cases, according to the state Department of Health, it was because victims lacked air conditioning.

"Last summer, and the summer before, I would average anywhere from 15 to 18 jobs a day,” said Jayme Martens of Smiley Crane SERVICE. "It's usually right at 110 [degrees] when all the units usually start failing if they're on their last leg."

And that hold true for people as well, as doctors say the body’s cooling system begins to overheat around 108 degrees. Today’s heat wave is expected to break by Sunday, when the valley of the sun returns to a normal 105 degrees.