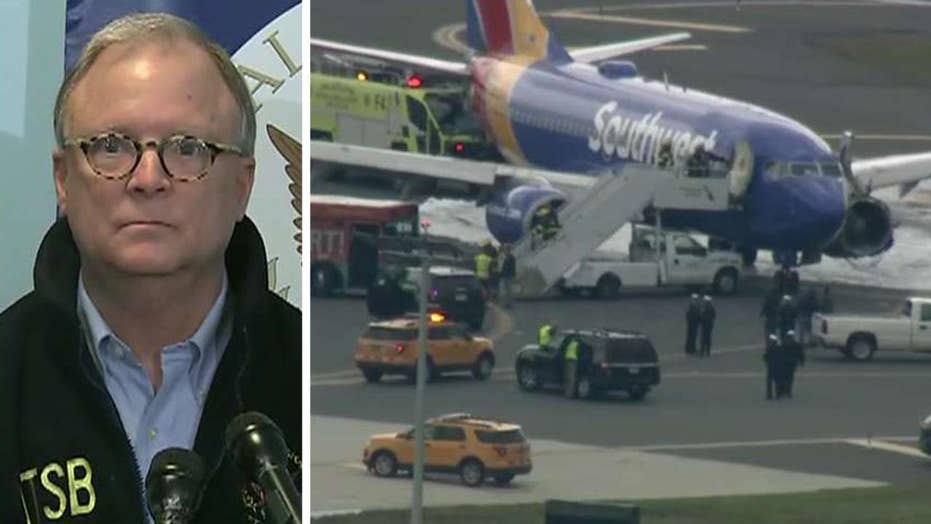 Robert Sumwalt briefs the media after the left engine of the Boeing 737-700 bound for Dallas exploded in midair.

One person was killed and seven others were injured Tuesday after a Southwest Airlines plane engine apparently exploded midair, officials said.

Flight 1380, which was headed from LaGuardia Airport in New York City to Dallas' Love Field, made an emergency landing at Philadelphia International Airport around 11:20 a.m. The jet had 144 passengers and five crew members aboard.

National Transportation Safety Board (NTSB) Chairman Robert Sumwalt confirmed the death at a news conference Tuesday. It was the first passenger fatality on a U.S. airline since 2009, according to the NTSB.

Seven others were treated for minor injuries, Philadelphia Fire Commissioner Adam Thiel said, adding that one of the engines experienced a fuel leak when firefighters arrived on scene, and a small fire was quickly brought under control.

The plane made an emergency landing after the crew reported damage to one of the engines, the fuselage and at least one window, the Federal Aviation Administration (FAA) said.

The engine on a Southwest Airlines plane is inspected as it sits on the runway at the Philadelphia International Airport after it made an emergency landing in Philadelphia, Tuesday, April 17, 2018. (Amanda Bourman via AP)

A female passenger, according to WCAU, was "partially sucked out" of the Boeing 373's window when the engine exploded and shrapnel from the engine smashed a window.

“One passenger, a woman, was partially…was drawn out towards the outside of the plane…was pulled back in by other passengers," Todd Bauer, the father-in-law of one of the passengers, told the news station.

New video from inside flight that made emergency landing

Southwest Airlines flight makes emergency landing in Philadelphia after a passenger was reportedly 'partially sucked out' an airplane window when an engine exploded in midair.

It was not immediately clear if the passenger who was killed was the woman who was reportedly "sucked out" of the window.

The pilot, identified as Tammie Jo Shults, asked an air traffic control operator via radio for emergency services to be on the scene for the injured passengers when the aircraft landed. When the pilot was asked if the plane was on fire they replied, "No, it's not on fire but part of it's missing. They said there is a hole and someone went out."

Marty Martinez, a passenger on the flight, posted a video on his personal Facebook page stating he was "recording his last moments." Martinez told CBS News there was "blood everywhere" on the aircraft.

"We were probably going down for 10 to 15 minutes," Martinez said. "And of course everyone is freaking out, everyone is crying. It was the scariest experience."

"And the thoughts that were going through my head of course were about my daughters, just wanting to see them again and give them a big hug so they wouldn't grow up without parents," Bourman added.

Southwest said in a statement that the company is "deeply saddened" at the passenger's death.

"The entire Southwest Airlines Family is devastated and extends its deepest, heartfelt sympathy to the Customers, employees, family members and loved ones affected by this tragic event," the statement read. "We have activated our emergency response team and are deploying every resource to support those affected by this tragedy."

The Federal Aviation Administration released a statement saying it was "investigating the incident and the National Transportation Board has been notified."

Fire crews were at the scene to evacuate the passengers on the plane. (FOX 29)

"Southwest Airlines Flight 1380 landed at Philadelphia International Airport this morning after the crew reported damage to one of the aircraft's engines, as well as fuselage and at least one window," the statement read.

The NTSB is sending a go-team to Philadelphia to investigate the incident.

Boeing Airplanes tweeted the company was aware of the incident and was "gathering more information" "to provide [with] technical assistance."

Southwest Airlines CEO Gary Kelly said at a news conference late Tuesday that the crew "handled the situation magnificently" and "did their jobs superbly." He didn't identify any of the five crewmembers, Kelly said the captain was "very experienced" and started at the airline in 1994.

Schults was confirmed to Fox News as the flight's pilot by her alma mater, MidAmerica Nazarene University in Kansas. The school wrote on Facebook in 2017 that Schults, was one of the first female fight pilots for the U.S. Navy.

Texas Attorney General Ken Paxton thanked Shults and the crew "who managed to land ... and prevent further injuries." He added they "are heroes."

It was the first death stemming from an in-flight accident on a U.S. airliner since 2009, when 49 people on board and one on the ground were killed in the crash of a Continental Express plane near Buffalo, New York.

Southwest has about 700 planes, all of them 737s, including more than 500 737-700s like the one involved in Tuesday's emergency landing. It is the world's largest operator of the 737, which is the best-selling jetliner in the world and has a good safety record.

Fox News' Raymond Bogan and The Associated Press contributed to this report.