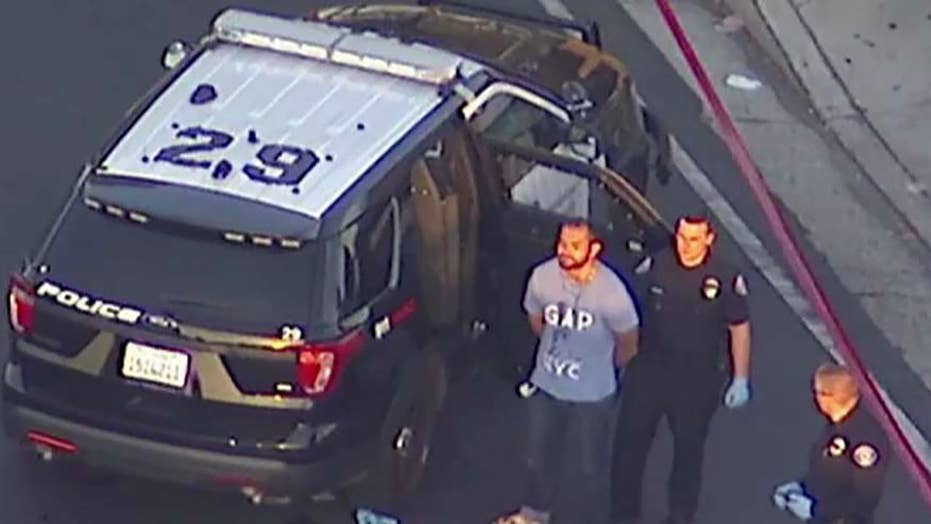 A man armed with machete-like knives is in police custody after allegedly going on a stabbing rampage in Southern California, leaving 4 dead and 2 injured.

An unidentified 33-year-old Orange County man who police said was "full of anger" was arrested. He allegedly stabbed a woman at an insurance business, two men at the Garden Grove apartment complex where he lived and a man at a gas station. The crimes spanned a period of two hours from Garden Grove to Santa Ana, which are under 10 miles from each other.

The victim at the gas station was slashed in the face so badly, his nose was nearly severed. Both men at the apartment complex died.

Garden Grove police stand watch at the scene of a stabbing in Garden Grove, Calif., Wednesday, Aug. 7, 2019. A man killed multiple people and wounded others in a string of robberies and stabbings in California's Orange County before he was arrested, police said Wednesday. (AP Photo/Alex Gallardo)

He was arrested without incident after the 7-Eleven stabbing. Police said they have surveillance video of some of the attacks.

The only motives in the killings appear to be "robbery, hate, homicide," Garden Grove police Lt. Carl Whitney said in a news conference.

"We know this guy was full of anger and he harmed a lot of people tonight," he said.

The suspect and all of the victims were Hispanic, police said.

The wounded suspects are expected to live.