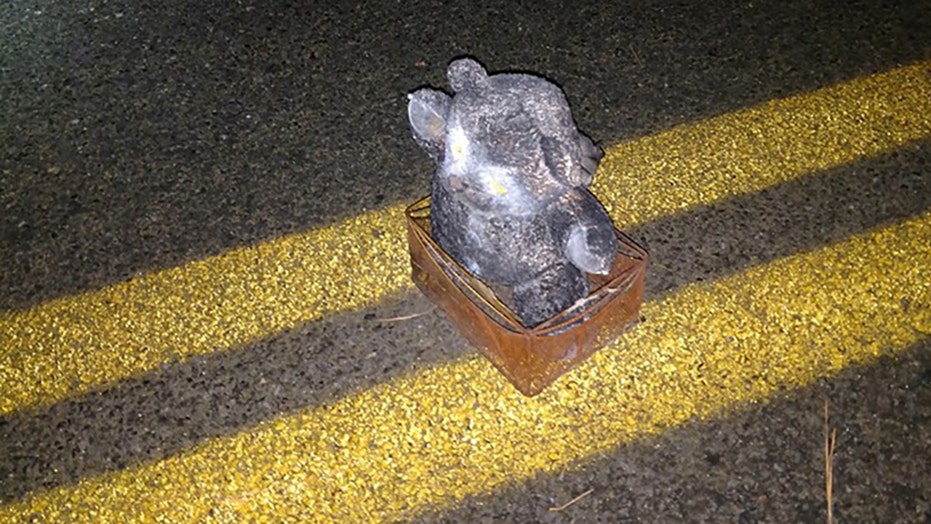 Wesley Ayers, 26, had placed six devices – three bombs and three “hoax devices” – on roadways around Anderson County between January 24 and February 24, 2018, the agency said in a news release.

A pipe bomb with nails was found inside a teddy bear sitting in a basket in the middle of a road on Feb 15, the release said. Bomb technicians were able to disable the device after a motorist reported the out-of-place stuffed animal to police. No one was injured.

“This was deliberately placed where a child or passerby could have found it. Fortunately, someone saw it and knew to call us,” said Special Agent Christopher Derrickson.

A pipe bomb with nails was found inside a teddy bear on Feb. 15, 2018. The device was successfully disarmed. (FBI)

However, weeks earlier a bomb inside a wicker basket placed in the middle of a rural roadway in Anderson County had exploded after a passerby stopped to examine it, the release said. The man suffered minor burns to his leg.

The agency said a note with Arabic writing referencing Usama bin Laden was found in one device. In another, a letter pledged allegiance to the Islamic State and threatened that the “community was no longer safe,” the release said.

The FBI said they caught a break in the case after a local man alerted them to Ayers, who he said had been practicing bomb-making in his home. Investigators searched Ayers’ home and found identical bomb components to the ones found at the scenes and a vest that suicide bombers were known to use.

The agency credited local authorities and the community with helping to catch Ayers quickly.

“The citizens of the county were very helpful. They were outstanding in sharing their time, allowing us to review their surveillance cameras, and answering our questions,” Special Agent Tanya Evanina said. “They really did come to our aid and help us in this case.”

Ayers was sentenced to 30 years in prison in February 2019. He pleaded guilty to weapons of mass destruction and firearm charges in October 2018.