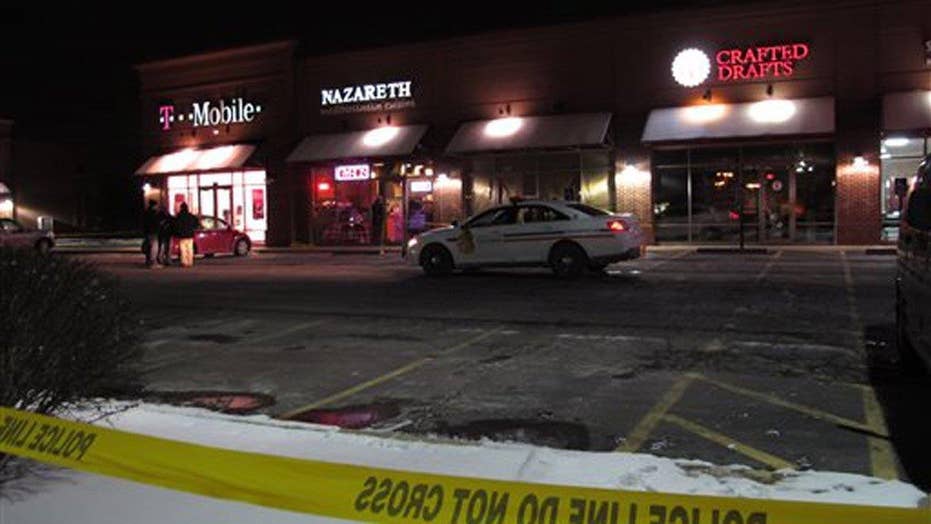 Law enforcement sources close to the investigation into a machete attack at an Ohio restaurant told Fox News Friday that federal authorities are investigating the incident as a potential lone wolf terror attack.

FBI investigators have not yet found any evidence to suggest the attack was directed by Islamic State or any other foreign terror organization, but federal authorities are still running down the possibility that Mohammad Barry was inspired by terrorist propaganda.

Columbus police identified Barry, 30, as the attacker at Nazareth Restaurant and Deli. Barry entered the restaurant Thursday night and wounded four patrons before being killed by police in a confrontation a few miles away.

It’s unclear what motivated Barry’s attack, but it appears he was known to the FBI.

Columbus police called in federal anti-terrorism officials after they realized from a computer alert that the suspect's car had been flagged by authorities, The Columbus Dispatch reported late Friday.

A Columbus police spokesman told the paper the move to call in the feds was tied to “something that’s in the (computer) system that came back about the vehicle and this person.” The spokesman, Sgt. Rich Weiner, referred questions about the nature of the computer alert to the FBI.

The paper reported that FBI officials in the Cincinnati office couldn't be reached for comment, and quoted those in Washington as saying that agents were assisting Columbus police but had no further information.

A source told Fox News earlier Friday the FBI is scouring Barry’s background, which includes interviewing associates and digging into his travel history. Fox is also told that investigators are looking to Barry’s digital and online footprint for terrorist propaganda or evidence of communication with extremists.

Police said the suspect walked into the restaurant around 5:30 p.m. and spoke with an employee before leaving. Local reports said he asked for the owner, but police did not confirm that. The suspect returned nearly 30 minutes later with machete in hand and attacked a couple, and then turned on diners who came to their aid, police said.

The suspect fled in a car, which was eventually stopped by cops, triggering the fatal encounter. According to local reports, as officers approached the man’s vehicle, he got out with a knife in one hand and the machete in the other. After an unsuccessful attempt to subdue the man with a Taser, he lunged towards cops forcing them to open fire.

Barry’s former roommate said he was baffled by the incident and described the machete-wielding man as extremely private.

“It’s not something I expected from him honestly. It was just shocking,” Souley Balde told My Fox 28 Columbus.

Nazareth has been open for 20 years and is a popular spot for locals in the neighborhood, in which the owner is not for greeting customers with a baseball bat in attempt at lighthearted humor.

It was not clear if there was any political or racial motivation for the attack, but the Nazarath is known for its multiculturalism. The entrance is adorned with a small Israeli flag and the Arabic phrase, "Ahlan Wa Shalan" which translates to "You are my family, take it easy."

Fox News’ Matthew Dean and the Associated Press contributed to this report.