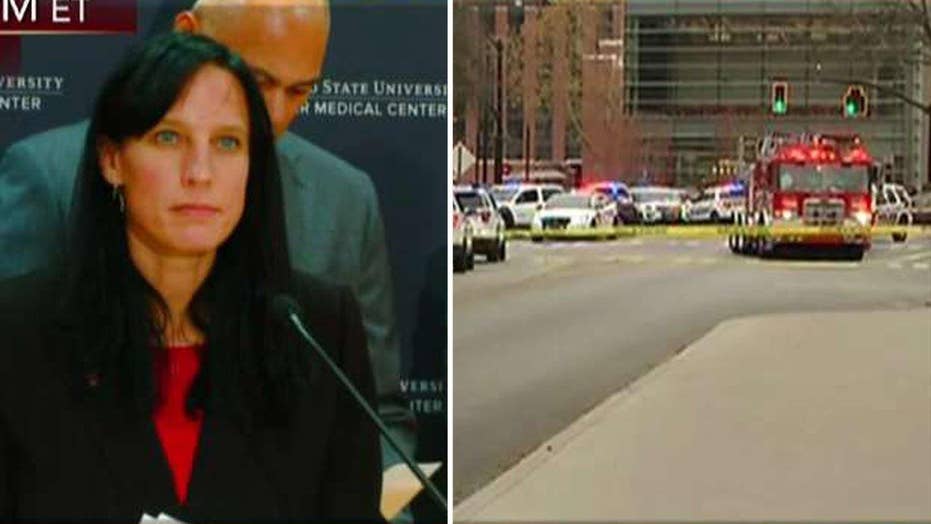 A Somali-born student at Ohio State University injured 11 people, one of them critically, on Monday when he attacked a crowd of pedestrians on campus in an incident one lawmaker said "bears all the hallmarks of a terror attack."

Authorities said Abdul Razak Ali Artan, 18, plowed a small gray Honda into the crowd outside Watts Hall, an engineering classroom building, just before 10 a.m. ET. Artan then got out of the vehicle and attacked people with a butcher knife before he was shot and killed by a campus police officer.

The officer, identified as Alan Horujko, 28, happened to be in the area because of a reported gas leak. Ohio State University Police Chief Craig Stone said Horujko arrived on the scene and shot Artan in under a minute. OSU Department of Public Safety Director Monica Moll said Horujko had done a "fabulous job."

In a statement, the university said that five of the victims had been struck by the car, five others had suffered lacerations or stab wounds and another person had orthopedic injuries. At least five of the victims were affiliated with Ohio State, either as faculty, students or staff.

Two law enforcement sources told Fox News that Artan came into the United States as a Somali refugee, and was granted status as a legal permanent resident.

In August, Ohio State's student newspaper, The Lantern, ran an interview with Artan, who identified himself as a Muslim and a third-year logistics management student who had just transferred from Columbus State Community College in the fall.

He said he was looking for a place to pray openly and worried about how he would be received.

Nov. 28: Ten injured in #Columbus at Ohio State in an attack involving a car and a butcher knife. The suspect is a reported Somali refugee. pic.twitter.com/6kV7ePyQim

"I was kind of scared with everything going on in the media. I'm a Muslim, it's not what media portrays me to be," he told the newspaper. "If people look at me, a Muslim praying, I don't know what they're going to think, what's going to happen. But I don't blame them. It's the media that put that picture in their heads."

The Columbus Dispatch reported that Artan received an associate's degree from Columbus State this past May before transferring to Ohio State. The paper said Artan was a logistics management major in the university's College of Business.

The Dispatch also reported that Artan lived in an apartment complex west of downtown Columbus. Neighbors told the paper that police and a bomb squad arrived at the complex around 11 a.m. Monday to secure the area. Local law enforcement officers reportedly are waiting for federal officials to arrive before searching the apartment.

Neighbors say Artan was always polite and attended daily prayer services at a mosque on the city's west side.

The motive behind the attack is still unclear, but law enforcement sources told Fox News the FBI was examining a Facebook post that may have been written by Artan earlier Monday. The post appeared to condemn U.S. military action in Muslim countries.

Rep. Adam Schiff, D-Calif., the ranking member of the House Intelligence Committee, said Artan "may have been self-radicalized."

"While we are still awaiting more information from the investigation into the OSU attack, it bears the all of the hallmarks of a terror attack," Schiff said in a statement. "The fight against ISIS, Al Qaeda and other terror organizations and their global incitement to radicalism, must be carried out on battlefields far away, and by confronting online propaganda here at home."

House Homeland Security Chairman Michael McCaul, R-Texas, said late Monday that "we do not yet have confirmation of terrorist connections" to the attack. However, McCaul added "this is the type of indiscriminate violence our enemies are urging their followers to use against us."

Vice President-elect Mike Pence called the episode "a tragic attack" and said "our prayers are with them all."

Leaders of Muslim organizations and mosques in the Columbus area condemned the attacks while cautioning people against jumping to conclusions or blaming a religion or an ethnicity.

"It is particularly heartbreaking to see this random act of violence come to this community I hold so dear," said Nicole Ghazi, who is active in Islamic organizations and is an Ohio State graduate.

Angshuman Kapil, a graduate student, was outside Watts Hall when the car barreled onto the sidewalk.

"It just hit everybody who was in front," he said. "After that everybody was shouting, `Run! Run! Run!"'

"I thought it was an accident initially until I saw the guy come out with a knife," Schneider said, adding that the man didn't say anything when he got out.

In recent months, federal law enforcement officials have raised concerns about online extremist propaganda that encourages knife and car attacks, which are easier to pull off than bombings.

The Islamic State group (ISIS) has urged sympathizers online to carry out "lone wolf" attacks in their home countries with whatever weapons are available to them.

Surveillance photos showed Artan in the car by himself just before the attack, but investigators are looking into whether anyone else was involved, the campus police chief said.

The bloodshed came as students were returning to classes following the Thanksgiving break and Ohio State's football victory over rival Michigan that brought more than 100,000 fans to campus on Saturday.

"There were several moments of chaos," said Rachel LeMaster, who works in the engineering college. "We barricaded ourselves like we're supposed to since it was right outside our door and just hunkered down."

LeMaster said she and others were eventually led outside the building, and she saw a body on the ground.

Classes were canceled for the rest of the day.

"Run, hide, fight" is standard protocol for active shooter situations. It means: Run away if possible; get out of view; or try to disrupt or incapacitate the shooter if your life is in imminent danger.