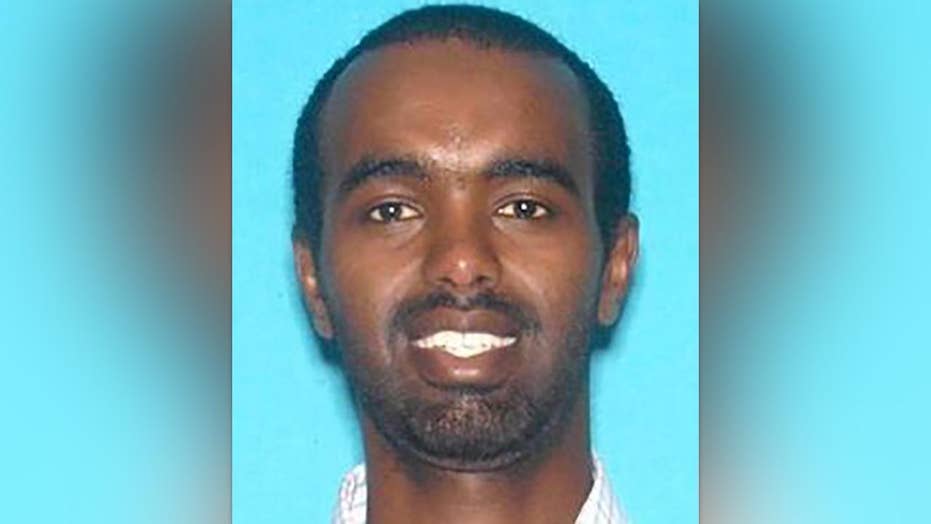 The attempted car ramming of two men outside a Los Angeles synagogue Friday -- allegedly by a Somali immigrant -- is being treated as a potential hate crime as federal officials work to establish a motive in the attack.

Mohamed Mohamed Abdi, 32, was arrested outside Congregation Bais Yehuda after the incident, which took place around 9 p.m. on Friday, the Los Angeles Police Department said Monday.

Two men reported they saw a vehicle being driven by a man, identified as Abdi, who yelled out anti-Semitic expletives "referencing their Jewish heritage" before running a red light, making a U-Turn and accelerating towards them "really, really fast."

"The reason we knew he was coming at us is because, when he did the U-turn, he was burning rubber, so it additionally caught our attention," one of the victims, who wished not to be identified, told FOX11. "He came within inches or feet from us and we both scrambled in different directions. He backed up and tried hitting me while my friend ran into the synagogue."

Surveillance video released by police shows the car, allegedly being driven by Abdi, making the sharp U-turn before speeding at the two men. In another video, the car can be seen crashing into another vehicle two blocks away.

Mohamed Mohamed Abdi can be seen standing outside his vehicle after crashing into another car on Friday. (FOX11)

The victim told FOX11 he then saw Abdi try to escape.

"The car was completely disabled and he kept on trying to make it work," the man told FOX11.

No one was injured during the incident, police said. The 32-year-old was taken into custody shortly after and charged with assault with a deadly weapon -- but also faces a special enhancement of a hate crime, according to LAPD.

Abdi is a U.S. citizen from Somalia, but had only driven to the Los Angeles area a few days ago, LAPD Chief Michel Moore said at a Monday news conference. The 32-year-old Abdi had emigrated to the Seattle area several years ago, and recently rented a car to drive to Los Angeles, the Los Angeles Times reported. It was not yet known if he knew anyone in the city or why he made the trip.

LAPD Chief Michel Moore said the arrest was part of a growing problem, and that "hate in America is on the rise." (FOX11)

There was no evidence Abdi acted with others as part of a plot, but that the department was working with the FBI and others in the Joint Terrorism Task force to investigate the incident further, Moore said.

"We are not naive, to the extent that he could have relationships or connections with other similarly like-minded individuals, and we're mindful of that and our investigative efforts will exploit his travel, his background, his social media accounts, a full spectrum approach on this," Moore said.

Abdi was also found carrying a knife, which was "very concerning," according to LAPD Deputy Chief Horace Frank.

Moore said recent incidents, such as the mass shooting at a synagogue in Pittsburgh last month that killed 11, show the attempted attack Friday could be part of a growing problem, Moore said.

"Hate in America is on the rise," he added. "That has to change."