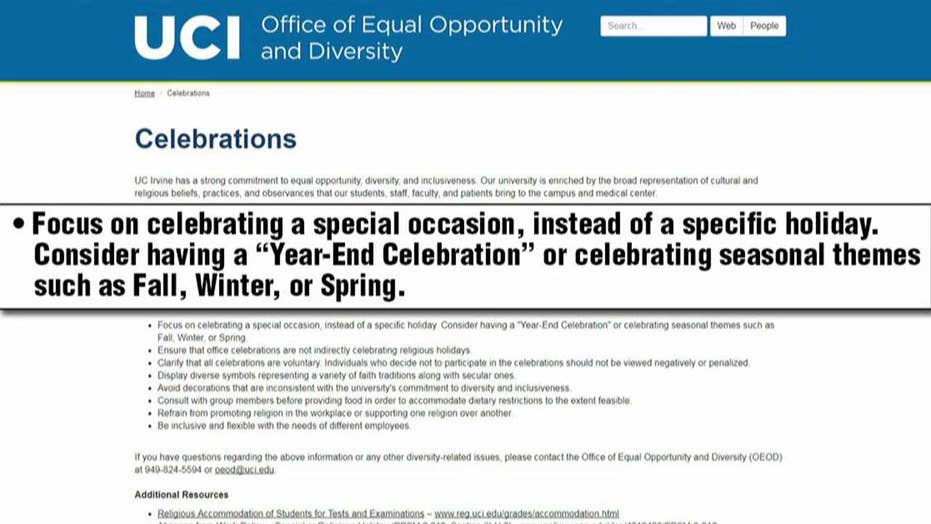 Christian student says she feels 'unwelcomed' by the campus guidelines.

It’s that time of year again when universities across the country issue their guidelines to make their designated safe spaces as inclusive as possible during the Christmas season.

While “snowflakes” have been melting since President Trump’s election, there’s an avalanche of political correctness pushing for Christmas-free campuses, according to a senior at the University of California, Irvine.

Rowlands believes the push for tolerance makes Christians, like herself, feel “unwelcomed.”

“They’ll pander to the minority to the detriment of the majority,” she said.

At Rowlands’ campus, departments are encouraged to “focus on celebrating a special occasion, instead of a specific holiday” with a “year-end celebration” or “celebrating seasonal themes such as fall, winter, or spring.”

"They'll pander to the minority to the detriment of the majority."

UCI’s Office of Equal Opportunity and Diversity provided guidelines for “inclusive and sensitive” celebrations that requests “office celebrations are not indirectly celebrating religious holidays.” Instead they’re encouraged to “display diverse symbols representing a variety of faith traditions along with secular ones.”

Meanwhile, Trump’s delivery on his campaign promise to bring “Merry Christmas” back to the White House has angered at least one student at the University of Alabama.

The Crimson White, UA’s student publication, ran an opinion piece declaring Trump’s decision to “bring the nativity back to the White House” a “slap in the face.”

“Placing the nativity scene on the grounds of the most important house in the United States is sending the message that their president forgets those who do not practice Christianity,” the editorial read.

The op-ed did not even note that the Obamas never removed the nativity – it was just reported they considered it.

But Baby Jesus isn’t the only one caught in the campus crossfire – Santa, himself, is taboo at one university.

Some colleges are pushing for Christmas-free campuses this month, critics say. (AP)

The State University of New York, Brockport suggests a grab bag instead of a “secret Santa” gift exchange.

“Keep decorations general and non-specific to any religion,” the Office of Diversity and Inclusion’s guideline reads. “Create a winter theme with lights and color rather than religious icons.”

“The College at Brockport is committed to honoring all cultural days of significance,” John Follaco, a college spokesperson, told Fox News, adding the suggestions are “not intended to diminish the celebration of Christmas. Instead, they are designed to encourage the celebration of all holidays that are meaningful to our diverse community.”

“One of the primary judging components used is inclusiveness, which takes in mind how the department’s decorations show respect for all religious winter holidays,” a university spokesperson told Fox News. “We have had great success and positive feedback from our LIFE community for having this contest on campus, and we plan to make it a winter holiday staple at the university.”

A lot of universities have changed the name of their events from “Christmas” to “holiday,” but American University visiting professor, Jacob Lupfer told the Morning Consult, “Holiday means ‘holy day.’ It’s not even a secular term. It’s just more inclusive.”