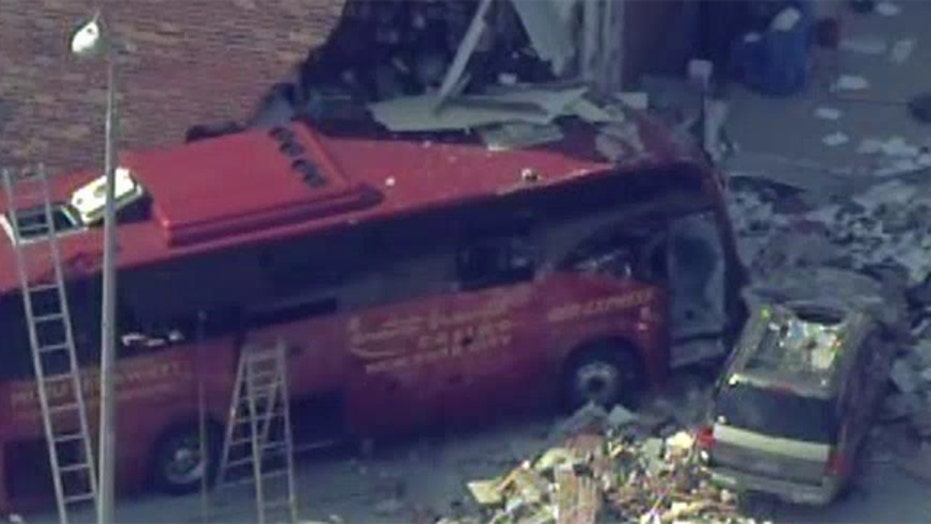 New York City officials said six people were injured Monday when a casino bus crashed into a three-story brick building, sheering off a large part of the structure.

A Fire Department of New York official told WNYW that five of the injured people were on the bus, while the sixth was inside the apartment building at the time of the accident. Two other people at the scene refused treatment and all of the injured were expected to survive, officials said.

The crash occurred at around 2:30 p.m. local time when the Resorts World Casino bus, swerving to avoid hitting a car, struck the building that houses a law office in the Rego Park section of Queens. The vehicle came to a stop on the sidewalk behind the building.

The front of the bus was demolished and the front window was out. Rescuers combed through the rubble of bricks and siding.

"I think everyone got out OK," Ferraro said. "God was on somebody's side today."

A spokesman for the casino said the company's thoughts and prayers were with the injured and the company was cooperating with the investigation. The casino did not say how many people were on board or where the bus was headed when it crashed.

Resorts World Casino, based in Queens, bills itself as the most successful racetrack casino in the world, and it offers a free shuttle bus service at several pickup locations around the five boroughs.

The buses are operated by Brooklyn-based Trans Express, which is part of the public transport operator, National Express.

"We are working with the local authorities as well as conducting our own investigation into the accident," said company spokeswoman Molly Hart. "Those involved in today's accident are in our thoughts and prayers."