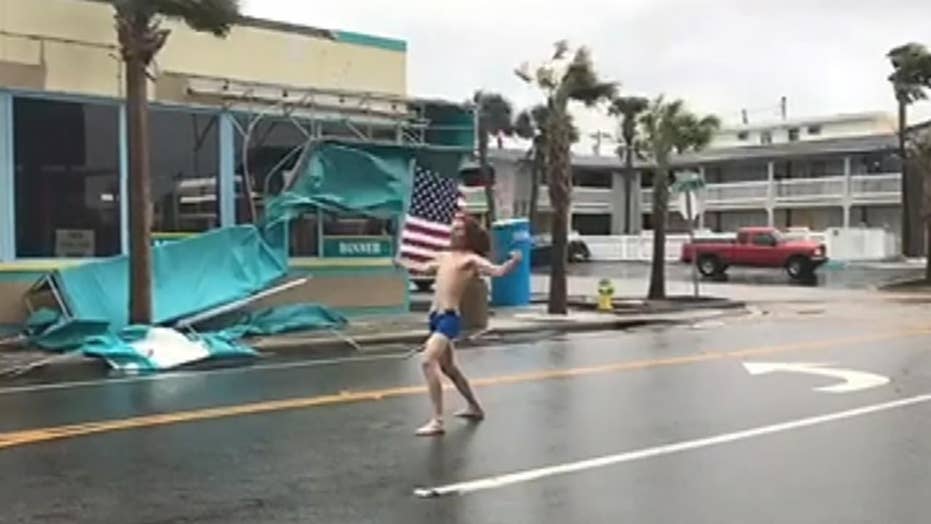 Florida man with US flag takes on Hurricane Florence

A shirtless man disregarded warnings from local authorities and walked out to a street in Myrtle Beach, S.C. on Friday morning to stare down a powerful hurricane -- for the third time.

Despite officials urging evacuations or, at the least, safely battening down the hatches at home, Lane Pittman was captured on film holding an American flag while headbanging to heavy metal music as Florence’s 85 mph winds and rain pelted him.

"Just being free and American. I don't let nothing oppress me, especially no dang, freaking hurricane," he told Fox Business Network reporter Kristina Partsinevelos, who caught up with him after his stunt...as he tried to fix a flat tire.

When asked if he was doing this to go viral, he responded: “I’ve already been viral.”

Pittman, who is from Jacksonville Beach, Florida, became Internet famous in 2015 after Fox News wrote about Neptune Beach Police issuing Pittman a citation for breaching the peace when he played a raucous guitar rendition of “The Star-Spangled Banner” -- and a verse of Ted Nugent’s “Stranglehold" -- during a July 4 celebration.

His pride in the American flag carried over to 2016, when he stared down Category 2 Hurricane Matthew without a shirt on and while holding the flag -- headbanging the entire time to Slayer hit “Raining Blood.” His ginger locks flowed behind him in the fierce winds that, at times, reached 40 mph.

“Had a request for some hair action during the ‘cane. I granted it,” he wrote on Facebook at the time in a post that has been viewed more than 27 million times.

Pittman returned for Hurricane Irma last year, posting a video showing him again jamming out to heavy metal music on the beach and holding the American flag.

This year, Pittman started a GoFundMe page to pay for gas and coffee as he drove from Florida to South Carolina. He raised $190 in less than a day.

Hurricane Florence made landfall as a powerful Category 1 storm at around 7:15 a.m. Friday morning, near Wrightsville Beach, N.C. A few hours after landfall, forecasters said the hurricane was slowly making its way south along the coast with sustained winds of 80 mph.