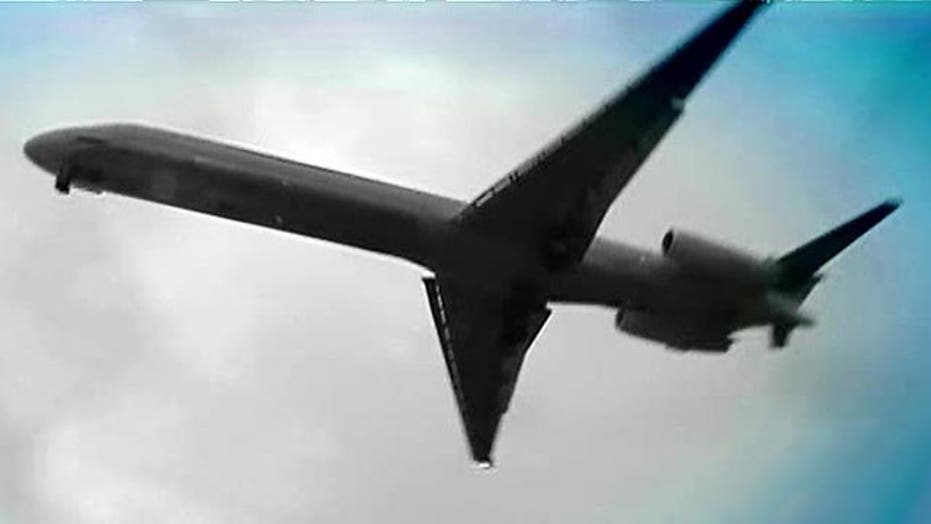 How vulnerable are planes to virtual hijacking

In-flight TVs and WiFi could allow hackers to turn off lights and shut off jet engines midair, analysts fear

One of the world’s foremost experts on counter-threat intelligence within the cybersecurity industry, who blew the whistle on vulnerabilities in airplane technology systems in a series of recent Fox News reports, has become the target of an FBI investigation himself.

Chris Roberts of the Colorado-based One World Labs, a security intelligence firm that identifies risks before they're exploited, said two FBI agents and two uniformed police officers pulled him off a United Airlines Boeing 737-800 commercial flight Wednesday night just after it landed in Syracuse, and spent the next four hours questioning him about cyberhacking of planes.

The FBI interrogation came just hours after Fox News published a report on Roberts’ research, in which he said: “We can still take planes out of the sky thanks to the flaws in the in-flight entertainment systems. Quite simply put, we can theorize on how to turn the engines off at 35,000 feet and not have any of those damn flashing lights go off in the cockpit.”

His findings, along with those of another security expert quoted in the Fox News reports, were backed up a GAO report released Tuesday.

“If you don’t have people like me researching and blowing the whistle on system vulnerabilities, we will find out the hard way what those vulnerabilities are when an attack happens,” Roberts said.

With increasingly sophisticated attacks on a number of targets, Roberts has consulted with numerous government and private clients to identify threats to financial and intellectual property, customer data and other protected information. He also has served as both an in-house security expert and consultant on IT security, engineering and architecture and design operations for scores of Fortune 500 companies across the finance, retail, energy and services sectors.

He regularly engages with various government agencies on critical security issues of national importance. Ironically, Roberts met with the FBI at the agency’s request three times after the agency asked for his guidance on protecting airplanes from cyberhackers.

Wednesday night, FBI agents confiscated Roberts’ numerous electronic devices and computer files including his laptop and thumb drives and demanded he give them access to his data. They wanted to forensically image his laptop, but it is a company-owned asset with client information, research and intellectual property, some of which is sensitive in nature and encrypted.

So after consulting with his CEO, Roberts told the agents they would need a warrant, something they still have not presented.

FBI agents disclosed to Roberts that they also had questioned fellow passengers and forensically examined the plane to determine if any areas had been tampered with.

“You have one element in the FBI reaching out to people like me for help, but another element doing a hell of a job burning those bridges,” Roberts said. “Those of us who do threat research are doing it for the right reasons, and we work to build relationships with the intelligence community because we want to help them identify weaknesses before they become a problem.”

Roberts flew from Denver to Chicago to Syracuse at the invitation of a defense contractor to speak an aerospace conference about vulnerabilities in airplane systems, a topic Roberts commented on for Fox News in late March, when he said commercial and even military planes have an Achilles heel that could leave them vulnerable to hackers or terrorists on the ground due to flaws in the entertainment and satellite communications systems.

Roberts’ findings were featured on FoxNews.com, on Fox News Radio and on the Fox News show "On the Record with Greta Van Susteren" on March 19, 2015, and again on April 15, 2015.

Ruben Santamarta, principal security consultant for IOActive, told Fox News he also discovered a backdoor that allowed him to gain privileged access to the Satellite Data Unit, the most important piece of SATCOM (Satellite communications) equipment on aircraft.

“These vulnerabilities allowed unauthenticated users to hack into the SATCOM equipment when it is accessible through WiFi or In-Flight entertainment networks,” Santamarta said.

There are “multiple high risk vulnerabilities” such as weak encryption algorithms or insecure protocols in SATCOM technologies manufactured by some of the world’s largest companies, Santamarta found.

“These vulnerabilities have the potential to allow a malicious actor to intercept, manipulate or block communications, and in some cases, to remotely take control of the physical device,” Santamarta reported.

The Government Accountability Office also presented a series of threatening scenarios for passengers, saying the same Internet access now available on most commercial flights makes it possible for hackers to bring down a plane in a report published Tuesday.

"According to cybersecurity experts we interviewed, Internet connectivity in the cabin should be considered a direct link between the aircraft and the outside world, which includes potential malicious actors," the GAO report states.

The worst-case scenario is a terrorist with a laptop sitting among passengers and taking control of the airplane using its passenger Wi-Fi, said Rep. Peter DeFazio, D-Ore., a member of the House Transportation and Infrastructure Committee who requested the investigation.

"That's a serious vulnerability, and FAA should work quickly" to fix the problem, DeFazio told the Associated Press.

Roberts isn’t sure what will happen next. He had to make his presentation to the defense industry Thursday in Syracuse without his electronics. Friday morning, he was scheduled to fly back to Denver, something he hopes he will be allowed to do. He already has been pre-checked through TSA, another irony he pointed out.

“The TSA has already dug into my background and cleared me for the pre-check program,” Roberts said, noting several other government agencies he’s worked with have done the same.

Paul Bresson, the Unit Chief for the FBI National Press Office at the FBI headquarters in Washington D.C., said in response to a Fox News inquiry about the Roberts’ detainment: “We have no comment on this matter.”