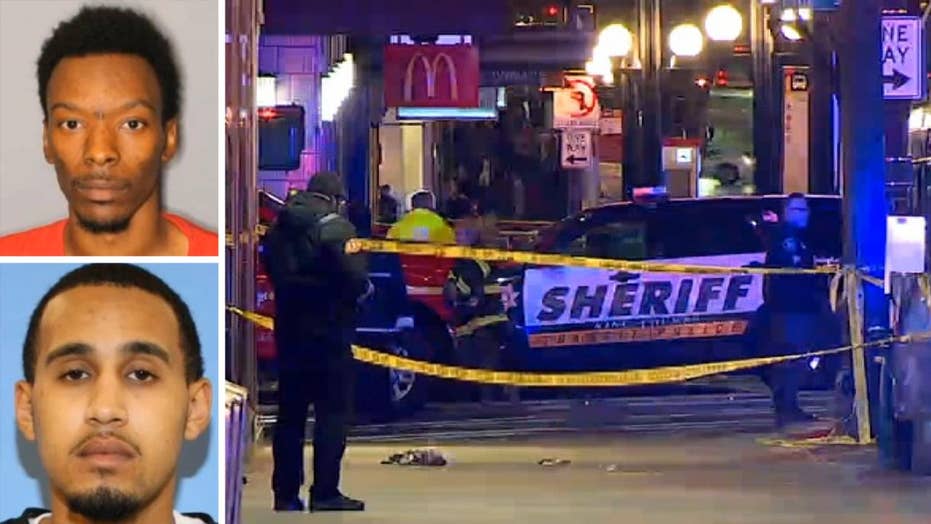 Marquise Latrelle Tolbert and William Ray Tolliver are considered armed and dangerous and have extensive criminal histories and gang connections.

Marquise Latrelle Tolbert and William Ray Tolliver, both 24, remain at large and are considered armed and dangerous, Seattle Mayor Jenny Durkan told reporters during a Thursday news conference. A third suspect who was not identified has been arrested, she said.

"Most of us in this city have walked that block about that time of day, and no one, absolutely no one in our city or country should step out of a coffee shop or get on a bus with fear of violence," she said.

The shooting erupted just before 5 p.m. when a dispute outside of a McDonald's between several people near Third Avenue and Pine Street led to shots fired by "multiple" shooters, Best told reporters.

The gunshots led to a chaotic scene as pedestrians ran for cover on packed streets filled with commuters and more than 100 police officers responded to the area. The suspects fled the scene and a search was initiated.

One woman who was in her 40s or 50s was found dead by first responders, fire officials told Fox News. Seven others, including a 9-year-old boy, were taken to the University of Washington's Harborview Medical Center.

Officers attend to one of several shooting victims, outside of a McDonald's on Seattle's Third Avenue. The window of the restaurant behind them was shattered after a gunman opened fire in the heavily trafficked downtown area. (David Silver via AP)

Some victims sustained gunshot wounds to the chest, stomach and leg. Four men, ages 21 through 49, have been released from the hospital. The 9-year-old boy was shot in the leg and was in satisfactory condition.

The suspect taken into custody suffered a gunshot wound was arrested at the hospital and has been booked into jail, Best said.

The shooting came hours after an officer-involved shooting a half-mile away and was the third such act of gun violence in a 24-hour span. Authorities do not believe the shootings are related.

Durkan pleaded for a call of action to address gun violence, saying the weapons allegedly used by the suspects during Wednesday's attack should not have been on the street.

"If this had been a fist-fight, eight people would not have ended up at the hospital,” she said. "We will not allow this to be the new normal."

She said the police department will deploy two mobile precincts downtown to address violence in the area.