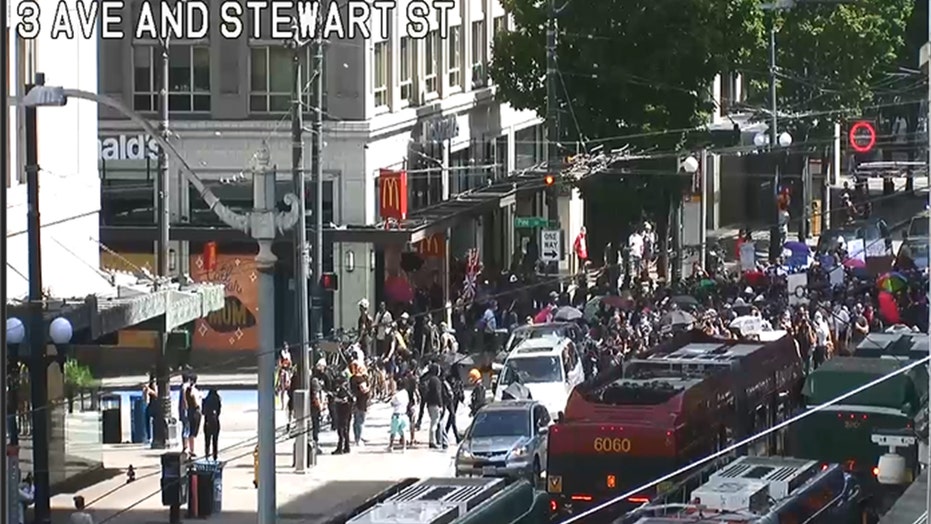 At least two people were arrested in Seattle and a dozen police officers were injured – including one who was hospitalized – on Sunday, after a march through downtown devolved into property damage and looting, police say.

Police said the demonstrators had broken out several windows of the East Precinct, then threw a device into the lobby that ignited a small fire.

The fire was later extinguished and it caused no injuries, police said.

The demonstration started between 2 p.m. and 3 p.m. near the intersection of 3rd Avenue and Pine Street. A photo posted on Seattle’s DOT traffic channel showed crowds blocking an intersection.

Around 2:30 p.m., Seattle journalist Katie Daviscourt tweeted a video of a crowd of people outside an Amazon Go building. Several people were seen spray-painting the building while others tried to smash the windows.

“Antifa Militants and Black Lives Matter rioters are breaking into Amazon Go Downtown Seattle,” Daviscourt tweeted. “This protest has turned into a riot.”

Seattle police tweeted shortly before 5 p.m. that the crowd had continued to march on Pike Street from downtown and two people had been arrested outside of the West Precinct.

Police said demonstrators had thrown rocks, bottles and other items at officers.  A dozen police officers were injured, including one who was hospitalized with neck injuries, KOMO reported.

A video clip posted on Twitter by Elizabeth Turnball shows the smashed doors to a Walgreens on Pine before Broadway.

Seattle police were working to block off the entrance to Interstate 5 so protesters could not enter, Seattle’s KING-TV reported.

Police said demonstrators had gone from Westlake Park to the Municipal Courthouse and then headed back north to the West Precinct "leaving behind a trail of property destruction."

"These are criminal acts, not peaceful protests," police said.

The demonstration came amid ongoing nationwide protests sparked by the police-involved death of George Floyd, a Black Minneapolis man, in late May.

Seattle drew national attention after activists set up an “occupied” zone dubbed “Capitol Hill Organized Protest,” or CHOP, that occupied several blocks around a park for about two weeks after police abandoned a precinct station following standoffs and clashes. It had changed its name from the “Capitol Hill Autonomous Zone,” or CHAZ. Seattle’s mayor ordered the zone cleared after two deadly shootings.