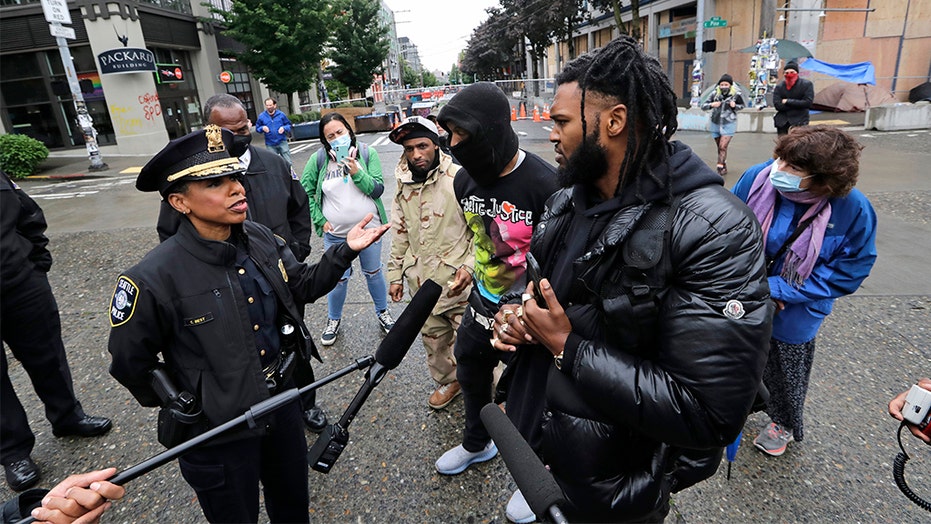 Protesters declared a “Cop Free Zone” near where Seattle police boarded up and seemingly abandoned their East Precinct building Monday night, according to local reports -- following days of demonstrations in response to the police-involved death of George Floyd in Minneapolis.

The surrounding area had seen more than a week of protests, with some of them growing violent.

On Monday, the Seattle Police Department sent a memo to officers noting that brass had decided to unblock the streets and allow demonstrators to march past the building on their way to Capitol Hill.

But with the building boarded up and police gone from the area, at least some demonstrators apparently decided to stay in place.

The first night without a police presence was “rainy and peaceful and full of speeches from activists, agitators, poets and socialist city council members,” according to Capitol Hill Seattle, a self-described community-based news blog.

Protesters demonstrate outside the Seattle Police Department's East Precinct after the building was boarded up and vacated and people continue rally against racial inequality and the death in Minneapolis police custody of George Floyd, in Seattle, Washington, U.S. June 8, 2020. (REUTERS/Jason Redmond)

That would be a stark contrast to events that unfolded over the weekend, when a man allegedly drove into a crowd of protesters Sunday night and shot someone just a block away from the building. The Seattle Fire Department tweeted that it took a 27-year-old man to the hospital from the scene with a gunshot wound.

Police repeatedly ordered demonstrators to disburse as the scene remained hectic Sunday night, according to the department’s Twitter feed.

Protesters allegedly also threw glass bottles, rocks and “explosives” at police there on Saturday. Police said they used blast balls and pepper spray to try and break up the crowds.

During more than a week of protests, police used pepper spray, tear gas and flash bangs on protesters in the area, prompting thousands of complaints about the police response, according to KUOW. City authorities banned police from using tear gas on protesters over the weekend.

The city’s police chief, Carmen Best, said Tuesday that police would further alter their approach to handling protests in the area, MyNorthwest reported.

The new approach is evident in images that Town Hall reporter Julio Rosas shared to Twitter.

They show hand-written signs taped to barricades in the area with messages including “Capitol Hill Autonomous Zone” and “You are now leaving the USA.”

Another image shows “Welcome to Free Cap Hill” and “No Cops Allowed” scrawled in black marker across a plastic road barrier.

City transportation officials later removed sections of the barricades but left some behind after “negotiating” with the protesters, according to Rosas.

Seattle police noted on Twitter than the department is still responding to 911 calls.