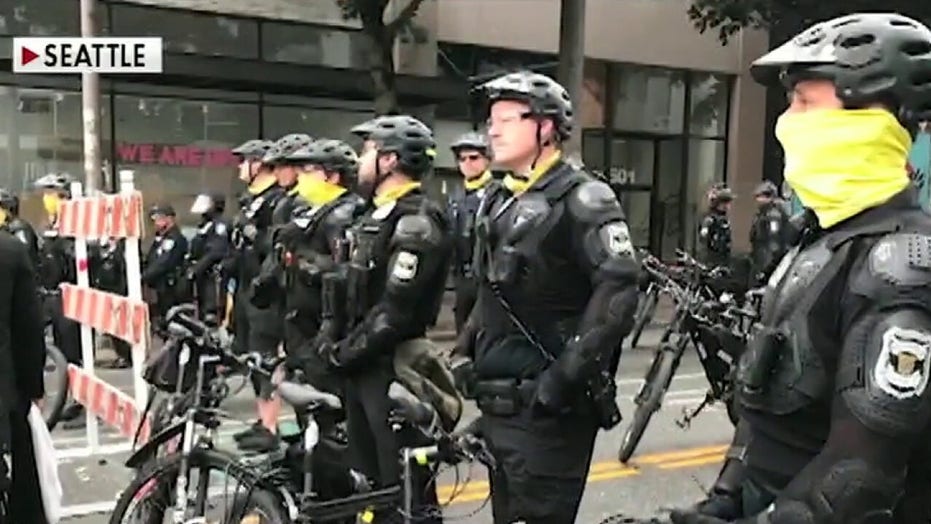 Pro-police protesters gather to speak out against the defund police movement; Dan Springer reports from Seattle.

A proposal by Seattle City Council this week to strip the police department of funding and officers may face roadblocks because of a consent decree with the federal government.

The proposals seek to reduce the police department by as many as 100 officers and cut nearly $4 million of its $400 million annual budget. The vote came after weeks of police protests in the city and throughout the country, prompted by the death of George Floyd while in the custody of Minneapolis police in May.

FILE: Police officers look on at protesters in Seattle.  (AP)

The proposal for massive layoffs prompted Carmen Best, Seattle’s first Black police chief, to resign in protest, saying her decision was “about the overarching lack of respect for the officers.”

Since 2012, the Seattle Police Department has been under a consent decree with the federal government. The decree was implemented that year after the U.S. Department of Justice released findings of a “pattern or practice” of unconstitutional use of force within the department, according to the city’s website.

It was signed by then-U.S. Attorney for the Western District of Washington Jenny Durkan, who is now Seattle's mayor.

The consent decree required the department to make sweeping reforms, including on the use of force, de-escalation training and new oversight with community involvement.

Reviews by an independent monitor have determined that the changes under the consent decree have led to a drop in how often police use force. But critics have said the department’s actions during recent protests show not enough progress has been made.

Durkan said the council’s push for defunding will make it difficult for the city to fulfill its obligations under the consent decree – things like training, data performance, transparency or oversight, KOMO News reported.

Durkan and Best had urged the council to slow down its discussions about police budgets, saying the issue could be taken up in earnest when the 2021 city budget is considered.

U.S. District Court of Western Washington Judge James Robart, who oversees the federal agreement, issued a warning after City Council passed the proposal. He said, “the court encourages the city of Seattle to remain mindful of its consent decree obligation.”

Fox News has reached out to the Seattle Police Department for comment.