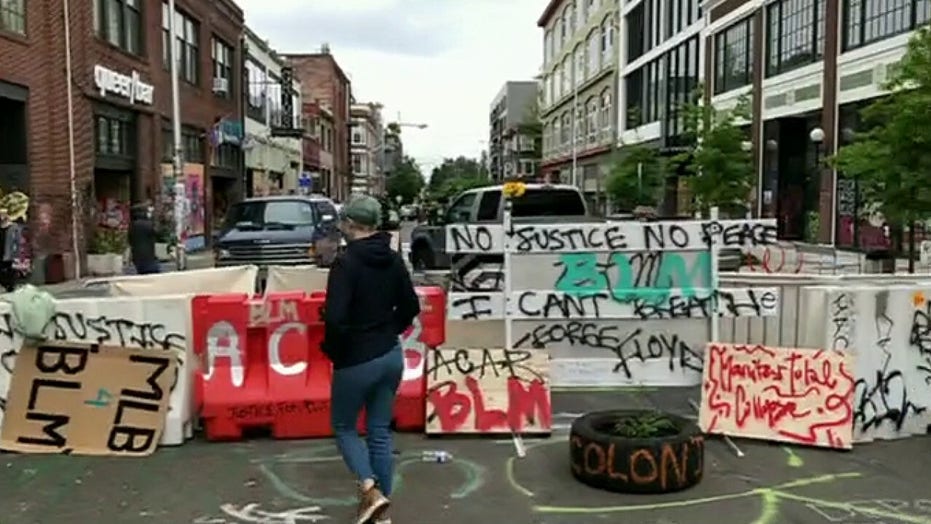 The 'autonomous zone' taken over by protesters demanding Seattle to abolish its police department.

Seattle Mayor Jenny Durkan and police chief Carmen Best are at odds over the city's handling of the self-declared autonomous zone set up by protesters spanning several blocks surrounding a police precinct.

Best has accused the mayor of shirking her responsibilities as an elected official and allowing protesters to oust police officers from a precinct located inside the 6-block radius now deemed a "cop free zone."

Demonstraters inside the perimeter of the "Capitol Hill Autonomous Zone" - or "CHAZ" - have battened down for almost a week decrying police brutality after the death of George Floyd in Minneapolis and are demanding the city abolish the Seattle Police Department.

A protester holds a sign that reads "Abolish Police" during a "Silent March" against racial inequality and police brutality that was organized by Black Lives Matter Seattle-King County, Friday, June 12, 2020, in Seattle. Hundreds of people marched for nearly two miles to support Black lives, oppose racism and to call for police reforms among other issues. (AP)

Attempts to identify the leaders of the organized demonstrations and negotiate a deal to allow officers back into the area have been unsuccessful.

Best and Durkan appeared at a joint press conference on Thursday, and was asked by a reporter if they had faith in each other, Komo News reported.

“Yes, I have faith in the mayor," Best said. "I’m standing right next to her giving this briefing."

But the local news outlet reported observers typified the exchange as tense and seemingly forced.

The two city officials have repeatedly given diverging messages over the ongoing situation in Seattle, compounding speculation of rising tensions behind closed doors.

Best, in an interview with "Good Morning America on Friday," said she was angry about the protester takeover.

“I am very angry about the situation that we have and at this point we just want to make sure that it gets resolved,” she said.

Durkan, on the other hand, expressed her support for the peaceful demonstrations and described it as an act of "patriotism."

“Lawfully gathering and expressing First Amendment rights, demanding we do better as a society, and providing true equity for communities of color is not terrorism. It’s patriotism,” the mayor said at a press conference.

Despite their differences, Best and Durkan attempted a united front on Friday, participating in the Black Lives Matter Seattle Kings County silent march against police brutality.

Durkan has drawn national outrage from law enforcement officials as well as President Trump who has repeatedly lambasted her handling of the protester takeover in downtown Seattle and demanded she restore "law and order."

In an appearance on CNN, Thursday, Durkan was pressed on how long she anticipates the city remain a police free zone with "CHAZ" supporters at the helm.

"I don't know, we could have a summer of love,” she said in response.

Officers were attempting to walk to the police department's East Precinct building, which has been boarded up and abandoned except for a few officers inside, but the protester, in a move that angered some other protesters, said he would walk with the officers to a side entrance of the precinct rather than have them walk directly through a crowd of angry protesters. (AP Photo/Ted S. Warren)

Best has repeatedly said it is her prerogative to have officers return to the precinct as soon as possible. In a press conference Wednesday, Best insisted it wasn't her decision to abandon the precinct. Officials from the East Precinct attempted to enter the precinct Thursday but were heckled by protesters demanding they stay out.

“You should know, leaving the precinct was not my decision,” Best told reporters.

She stressed that officers have been unable to respond to calls for help inside the autonomous zone.

EDITOR’S NOTE: A previous version of this report included a quote from Police Chief Carmen Best in which she stated, “Our calls for service have more than tripled.” In fact, while police response times to 911 calls have tripled, emergency calls to police have fallen by 31 percent since the beginning of June, according to a local report.