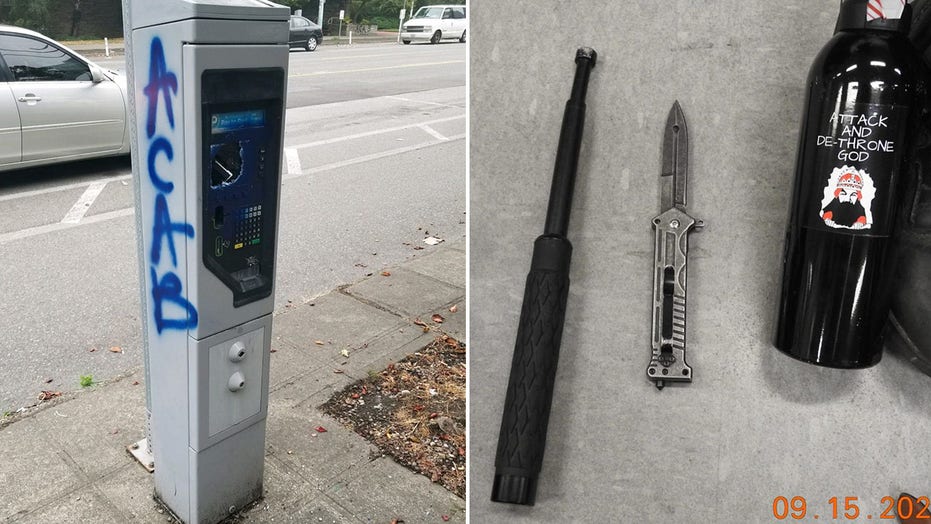 Seattle cops made 11 arrests on Tuesday after property and businesses were damaged during an anti-police demonstration, authorities said.

A group of 20 to 30 protesters gathered at Denny Park just after 3 p.m. for an anti-police rally, Seattle authorities said in a news release. As the group marched, police said some members began tagging businesses with spray paint and damaging their windows.

Police released a photo of a damaged parking meter with the anti-police slogan “ACAB” scrawled in spray paint.

Police arrested 11 people after property was damaged during an anti-police protest Tuesday. Police recovered a knife, a collapsible baton. bear mace and other items from those arrested. (Seattle Police Department)

When police tried to arrest those damaging the property, other members of the group attempted to interfere, the release said. They were also taken into custody.

Police recovered bear mace, spray paint, a collapsible baton, and a knife from the arrested individuals.

One of the arrested protesters was taken to a hospital for treatment after complaining of an injury, police said. The remaining 10 were booked into the King County Jail for felony property damage and obstructing police.