A Seattle-area Antifa member, who has been arrested multiple times during violent protests and tweeted out a list of businesses that supported the city's efforts to clean out a homeless encampment, has been identified as a children's camp counselor and substitute teacher.

On Dec. 16, Mikaele Andrew Baker, 23, tweeted a list with the names of businesses and a resident that signed a petition in support of sweeping Cal Anderson Park, reported the Post Millennial, an online publication that frequently reports on Antifa and other left-wing groups. The park was the previous site of the Capitol Hill Organized Protest -- or CHOP over the summer.

"These are the businesses (and literally one, single resident) that signed a petition to sweep Cal Anderson Park. No further comment," Baker tweeted under the pseudonym "@ComradeFlute" along with a screenshot of a list. 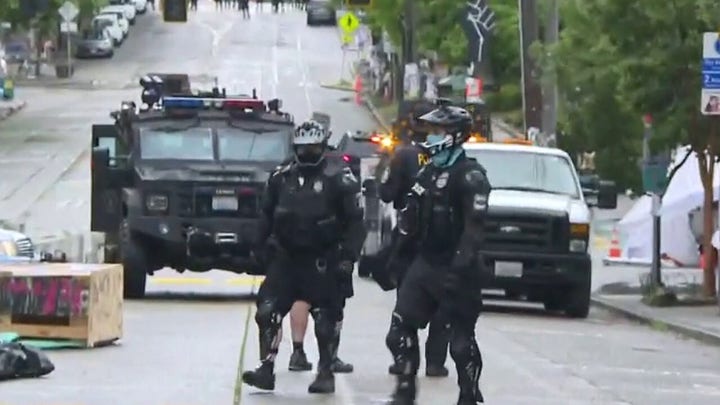 In a follow-up post, another Antifa activist posted the addresses associated with the business owners.

"If we do stop this sweep, that’s a victory, and we can carry that energy to the next action," Baker tweeted on Dec. 17.

In addition to tweeting about protests, Baker also posted about working with children.

"I work full time as a childcare worker and I'm a substitute teacher, idk what makes you think I'd be unemployed," he wrote in response to another Twitter user.

In a subsequent post, Baker said: I'm a history teacher, I'm from the Olympic Peninsula before moving to Seattle for school and work."

After several fatal shootings and other crimes in the so-called autonomous zone, the city dismantled the area. Activities and homeless people soon erected tents and began living in the park, much to the ire of nearby business owners and residents.

In response to the city's intent to dismantle the encampment, activists barricaded the park and a lawsuit was filed. Last week, a federal judge denied a motion to stop the city and the encampment was dismantled.

On Friday, the city sent police officers and crews to clean up the park. Authorities made 21 arrests.

The Post Millenial reported Baker has a long history of protest activity in Seattle. Baker participated in the CHOP protests and expressed support for violent behavior, the publication said.

In one tweet, Baker said: "I am a revolutionary anarchist. I'm not a war-hawk, but I see open warfare against fascists and the state as a necessary evil to achieve liberation."

Messages to Baker were not returned.

Baker also has several arrests related to protests over the summer. As chair of the Washington Progressive Party, Baker criticized law enforcement in a June message.