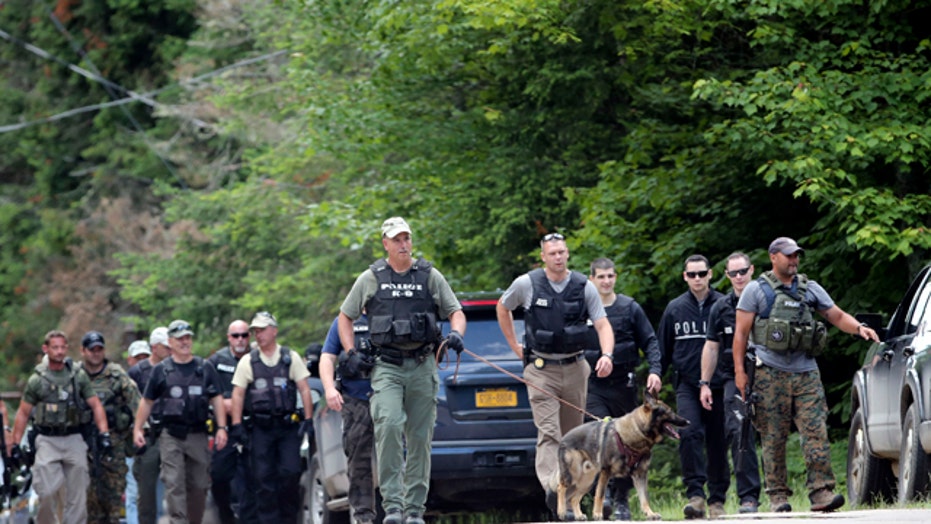 The search for two convicted murderers who broke out of an upstate New York maximum-security prison more than two weeks ago focused Monday on a town near the prison amid reports that evidence has been found linking the men to the area.

A law enforcement source involved in the search told Fox News that the search was based on evidence found in a cabin in the woods in Franklin County.

Forensic evidence had been discovered indicating that either Richard Matt and David Sweat had recently been in Owls Head, 20 miles west of the Clinton County Correctional Facility in Dannemora, where the two men escaped June 6, Fox News confirmed.

The paper, citing a person familiar with the investigation, reported that evidence suggested that at least one of the men had broken into a home in the area, which is east of the Titusville Mountain State Forest.

He added that several seasonal camps are located in the area, and a man, armed with a handgun, went to check on his camp on Saturday and saw a jug of water and a jar of peanut butter on a table in one of the cabins.

Bellinger said the camp owner yelled for whoever was inside to come out and saw a man run out the back – but he could not tell whether it was one of the fugitives.

Boots, bloody socks and toiletries were also found in the area Saturday, the Press-Republican reported.

A law enforcement official who was not authorized to speak on the record said he believes the net is closing in on the escaped killers.

"The dogs have got a good track, and we are tightening the perimeter," he told the Press-Republican, "so within the next 24 to 48 hours, we're confident they will be caught.

"It looks like they followed the power lines from Dannemora to Lyon Mountain and into Standish," the source added

WCAX-TV in Burlington, Vt., also reported that investigators had found DNA from one of the inmates in a cabin that had been broken into in Wolf Pond, located around 9 miles away from Owls Head. A Vermont State Police tactical team had been mobilized to help track down the men, according to the station.

New York State Police said Monday that a search for the escapees near the Pennsylvania border concluded without finding any evidence.

About 300 officers searched a rural area of Allegheny County in western New York, where two men who resembled David Sweat and Richard Matt were spotted Saturday near a railroad line.

Concentrating in the area along County Route 20 and Interstate 86, officers walked railroad tracks, checked car trunks and deployed search dogs as a helicopter flew back and forth overhead. State police said Monday morning the search in that area has been halted.

If the two escapees are still together, that's not surprising, experts told the Associated Press.

In the wilderness, fugitives often stick together for survival's sake, unless they have pre-planned to split up and reunite at a camp or other hideaway, said Patrick Patten, who trains law enforcement officers on woodland tracking.

That can be true in urban settings, too. Five of seven inmates who broke out of a Texas prison in December 2000 were staying in the same Colorado motor home when authorities caught up with them about six weeks later; the other two were captured together days later in a nearby hotel.

While escapees may risk drawing more attention than they would alone, they may not separate partly out of concern that one will blunder, get caught and give up the other or others, said Terry Pelz, a former Texas prison warden who now teaches criminal justice at the University of Houston Downtown.

Also, "they probably have an understanding that they're better off together" because they can help each other, such as by trading off lookout duty, he said.

Until Saturday, the search for Matt and Sweat was concentrated in a several-mile radius around the prison in the Adirondacks. After a woman called in Saturday's possible sighting in Allegheny County, police interviewed the witness at length and decided she was credible and the tip bore investigating, State Police Maj. Michael J. Cerretto said.

Authorities also said Friday that two men fitting the descriptions of Sweat and Matt had been seen a week ago in Steuben County, east of Allegheny County. Two men were seen walking near a rail yard in Erwin on June 13, and then spotted the next day in Lindley, heading toward the Pennsylvania border.

Investigators also have conducted interviews in both communities and sent surveillance video to Albany for further analysis. Cerretto on Sunday wouldn't say whether there had been any further reports of sightings.

Sweat, 35, was serving a life sentence without parole for killing a sheriff's deputy. Matt, 48, was doing 25 years to life for the 1997 kidnapping, torture and hacksaw dismemberment of his former boss.

Prison worker Joyce Mitchell remained in custody on charges she helped the two men escape by providing them hacksaw blades, chisels and other tools. She has pleaded not guilty.

Officials said a corrections officer also has been placed on administrative leave as part of the investigation into the men's escape. Meanwhile, The New York Times reported Sunday that the catwalks and tunnels through which the inmates escaped had not been inspected in years and no guards were in two of the prison's 35-foot watchtowers on the night that the men escaped.