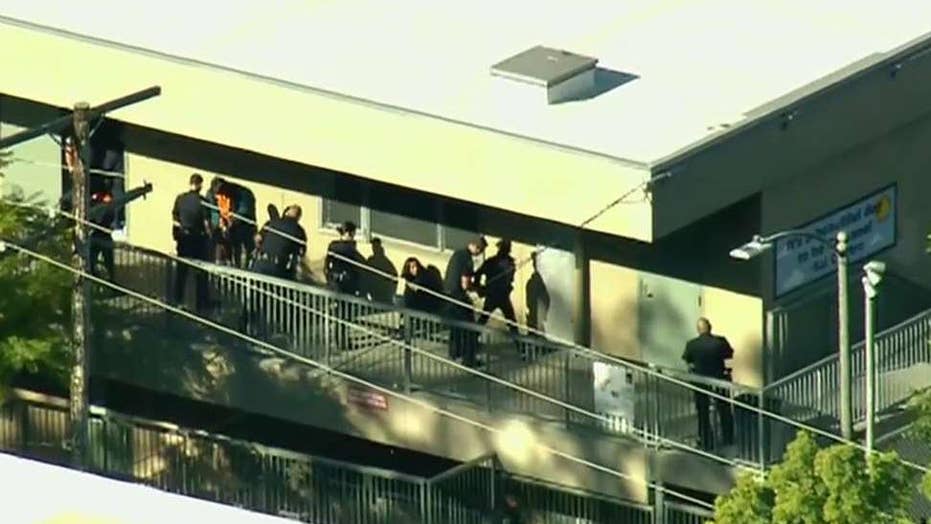 12-year-old girl opened fire in a classroom and shot a student in the head according to investigators in Los Angeles.

A 12-year-old girl was taken into custody last week after police said the gun she brought to Salvador B. Castro Middle School in Los Angeles accidentally discharged in her backpack.

A bullet tore through a girl's wrist before it hit a boy in the head, according to authorities. Doctors said both students are expected to recover, and the 12-year-old girl was booked in a juvenile detention center.

While female shooters are not as common, there have been a series of violent incidents in the past involving children, teens and adult women. Read on for a look at other some school shootings involving female shooters.

Dorothy Dutiel, 15, shot and killed her 15-year-old girlfriend May Kieu at Independence High School in Glendale, Ariz., before shooting herself, KPNX reported.

“She hasn’t loved me like that for a long time,” the station quoted Dutiel as saying in a note. “That she’s been iffy about us for years. This week has been the worst in my life.”

Sunghee Kwon, 46, reportedly killed her 45-year-old professor ex-husband Raja Fayad and took her own life at the University of South Carolina.

“They had continued in a relationship after their divorce, including sharing a home, until just recently,” Richland County Coroner Gary Watts was quoted by Reuters as saying in a statement at the time.

Professor Amy Bishop killed three people and hurt another three in a shooting at the University of Alabama in Huntsville, the FBI said in a report.

She was in a biology department meeting for a half-hour before she “stood up and began firing,” it said.

Bishop was sentenced in 2012 to life without parole after she pleaded guilty to capital murder and attempted murder charges.

Bishop has filed numerous appeals in the case, WAFF reported in 2015.

“I will never forgive myself for what I have done, and I don't expect you to forgive me,” she reportedly told Collette’s family in court. "You have no idea how sorry I truly am.”

Latina Williams, 23, killed two students in a Louisiana Technical College classroom before killing herself, according to the FBI report.

“She fired six rounds, then reloaded and committed suicide before police arrived,” the report said. Killed were Karsheika Graves, 21, and Taneshia Butler, 26.

After the shooting, Baton Rouge police reportedly said Williams had been exhibiting signs “of paranoia and losing touch with reality.”

Elizabeth Bush, 14, was accused of shooting 13-year-old Kimberly Marchese in the shoulder at a parochial school in Williamsport, Pa.

Bush told a judge in 2001 that she initially planned “to shoot myself and show everybody how much (teasing) hurts so they could see,” The Associated Press reported at the time.

"It just happened, sir. I don't know,” Bush later said when the judge inquired about her changed decision. “I just wanted to scare her."

The judge said he thought Bush “intentionally sought to cause her death” and sentenced Bush to a juvenile psychiatric facility, the AP reported. Marchese survived the shooting.

Jillian Robbins, 19, was accused of opening fire at Penn State University with a rifle and killing 21-year-old student Melanie Spalla, The Collegian reported.

Robbins, who was mentally ill, pleaded guilty to third-degree murder and attempting to kill another four people, the AP reported in 1998. She was sentenced to 30 to 60 years behind bars.

Laurie Dann, 30, killed 8-year-old Nicky Corwin and hurt five other children in a shooting at Hubbard Woods School in Winnetka, Illinois, as part of a crime spree, WMAQ Chicago reported.

Dann took off and held a family hostage in a home, the report added. She shot one of the family members, a 20-year-old college student who survived, and ultimately killed herself.

The 16-year-old “opened fire at an elementary school, killing the principal and a custodian and wounding eight children and a police officer,” according to an NYPD report on active shooters. “Spencer fired the shots from her house across the street from the school.”

Spencer purportedly said it was because she didn't like Mondays.

She pleaded guilty to charges and remains behind bars, History.com reported.