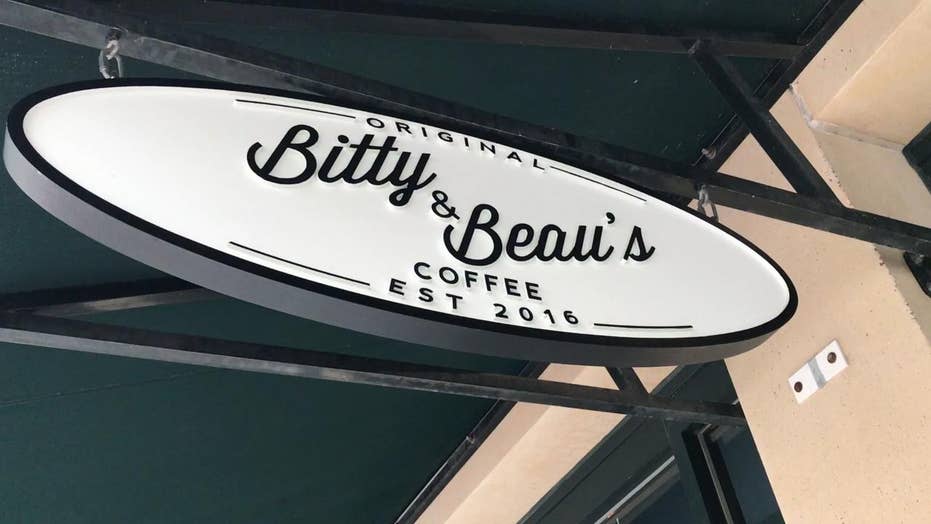 Experts say more than 80 percent of individuals with disabilities are unemployed, but two former Broadway performers are stepping back into the spotlight after opening coffee shops that employ people with disabilities.

Charleston, S.C. – The smell of freshly brewed coffee fills a packed cafe situated on a cobblestone street in the coastal city town of Charleston, S.C. Baristas greet customers with smiles, sometimes hugs. At one point, customers and employees start dancing.

Bitty Wright and Sam Hazeltine hugging behind he counter of Bitty and Beau's Coffee. (Fox News)

This small mom-and-pop coffee shop, Bitty and Beau’s Coffee, is getting national attention because of its employees, all of whom have intellectual or cognitive disabilities.

Two former Broadway performers opened the shop to open up opportunities for those who, because of physical or developmental delays, struggle finding jobs. Experts say more than 80 percent of individuals with disabilities are without a job.

“When we opened this coffee shop we thought we would put a dent in the unemployment rate,” Bitty and Beau’s Coffee owner Ben Wright told Fox News. “What we figured out, what this really is and continues to be, is a human rights movement disguised as a coffee shop.”

Named after their two youngest children with Down syndrome, the Wrights opened the first Bitty and Beau’s Coffee in Wilmington, N.C. in 2016.

The café employs more than three dozen workers with disabilities ranging from Down syndrome to autism.

“People with and without disabilities should be working together shoulder to shoulder in every environment. That’s the point of what we are doing,” Ben Wright told Fox News. (Fox News)

“I think people with developmental and intellectual disabilities (I.D.D) ….are not valued like people who don’t have those disabilities,” Ben Wright said. “I think they’re looked at… looked upon as broken, as less than… less than human. And we are here to say, they are not.”

This year they opened their second shop in Charleston with nearly two dozen workers, serving up to 500 people a day.

Up to 500 customers come into the coffee shop everyday. (Fox News)

Hazeltine is one of those workers. Born with Down syndrome, he began working at the shop when it opened in March.

The Wrights say they train their employees for about a week in a classroom setting, but they do not use a set curriculum because everyone has a unique way of learning.

Once the employees complete training, they work side by side with members of the management team for on-the-job training. They make more than the minimum wage, which is $7.25 in South Carolina.

“…People with and without disabilities should be working together, shoulder to shoulder, in every environment. That’s the point of what we are doing,” Ben Wright said.

Members from Family Connection, a non-profit dedicated to promoting inclusion for those with disabilities, said they believe people with I.D.D have a harder time seeking employment because there are a lot of misconceptions regarding what it would take to employ them.

“They are viewed as not having an ability vs. seeing them as or the capabilities that they do have to our society,” Family Connection Executive Director Amy Holbert told Fox News. “Not only does it improve morale in the workplace, but it also improves productivity.”

She said research has shown corporations that hire people with I.D.D described them as dependable, reliable, productive and engaged.

“Employment is great, but I believe integrated employment, meaningful employment, are what we need to strive for as employers and employees,” Holbert said.

The Wrights say they are looking at areas to build their next shop, with the hope of having it up and running by the end of the year.

“We hope to have shops all over the country one day, where we employ people with disabilities,” Amy Wright said. “Also, bring people together with and without disabilities so they can see how their lives have value just like everybody else’s.”