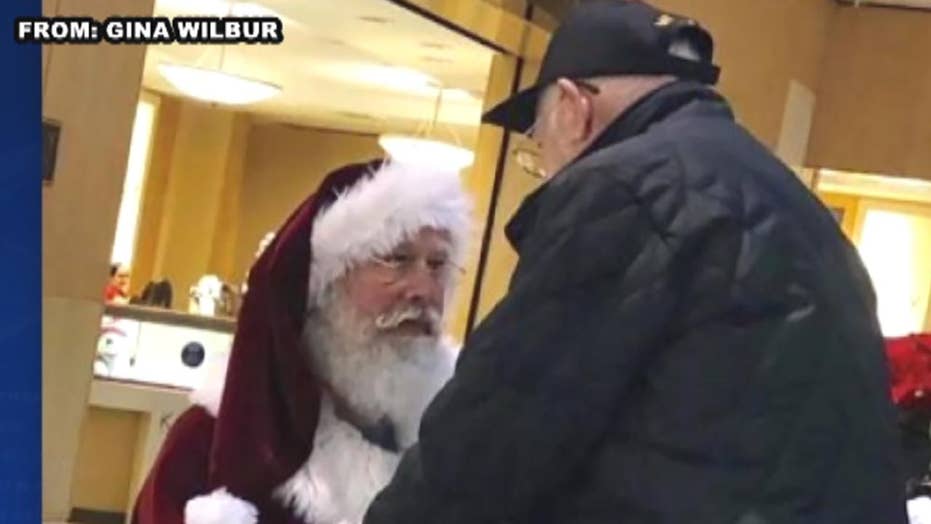 Santa gets down on knee to thank veteran for his service

If there had been any question about it before, it was clear Saturday that 93-year-old World War II veteran Bob Smiley had been good, for goodness sake.

Even Santa Claus confirmed it.

Smiley and Santa were captured in a picture-perfect moment at the Concord Mall in Wilmington, Delaware, as St. Nick got down on one knee and thanked Smiley for his service.

“I hear Santa telling the gentleman, in a soft voice, of others he knew who served. He shakes his hand with genuine gratefulness thanking him for his service,” Gina Wilbur, who took the picture, wrote in a Facebook post that has since gone viral.

Members of Smiley’s family spotted the viral photo as it made the rounds on Facebook and reached out to Wilbur because they were so moved by the image.

“We owe a debt of gratitude to men like this that have made such a life-changing decision to give of themselves, be willing to lay down their life even, for other people,” Santa told FOX29 Philadelphia.

Smiley said that, for his generation, service was more about “duty” than sacrifice.

“We all went, we all served,” he said. “Every boy in my high school graduating class all served. Out of 35 boys, five were killed and they were my friends for 13 years of my life.”

Smiley said he truly appreciates when people thank him for his service.

“I try to show my appreciation when they do thank me,” he said. “I thank them for thinking about us.”