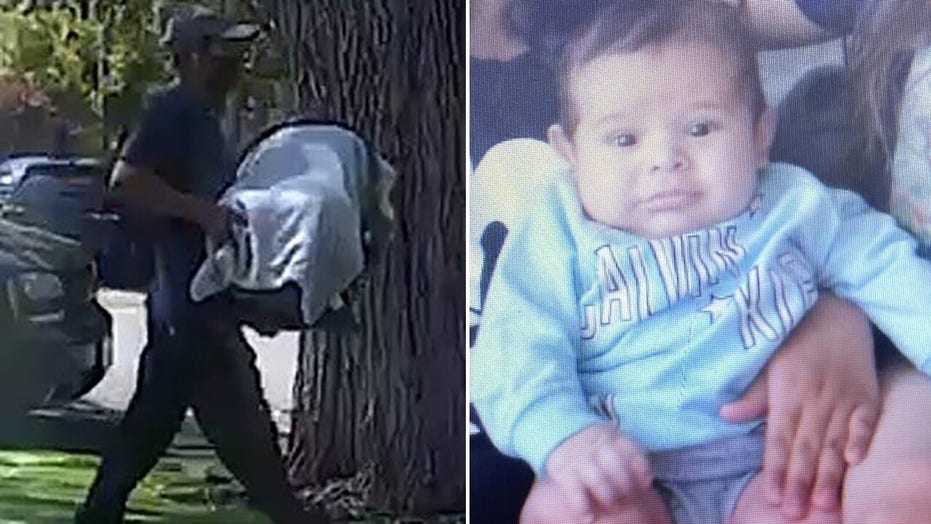 San Jose police have released surveillance video of a suspect believed to have kidnapped a 3-month-old baby from his grandmother’s apartment on Monday afternoon.

A 3-month-old baby kidnapped from his grandmother’s home in San Jose, California, was found safe and a suspect has been taken into custody, authorities said Tuesday.

Brandon Cuellar was located alive and taken to a hospital as a precaution, San Jose police announced around 10 a.m. local time. Police said one suspect was in custody but didn’t immediately give further details.

Brandon was in the care of his grandmother when he was taken from her apartment in the 1000 block of Elm Street around 1 p.m. Monday, San Jose police Sgt. Christian Camarillo told reporters Monday evening. Police said Brandon's mother was at work at the time of the kidnapping and that his father is incarcerated.

The kidnapping happened in a matter of minutes after the unknown man entered the home and took the child from a bedroom while his grandmother was unloading groceries, Camarillo said.

Police earlier released surveillance video showing the suspect walking down the sidewalk with a black baby carrier covered by a white blanket.

"The family does not recognize this suspect," police wrote on Twitter.

Police said no Amber Alert was issued because authorities don’t have a vehicle description or license plate, and would activate one once investigators learned that information.

Police described the suspect as a dark-complexioned Hispanic male with shirt hair. He was wearing black pants and a dark blue shirt with gray shoes, a gray baseball cap and a black face mask.

It was unclear whether the person in custody is the man seen on the surveillance video.

Police said the FBI assisted in the search for Brandon.

"Officers and agents with the FBI are going door to door in the area of Elm [Street] and surrounding streets in an effort to locate witnesses or any other info related to this case," police said earlier on Tuesday.

San Jose is located about 50 miles from San Francisco.